CBS viewers have been enjoying a long reprieve from seeing liberal rants after their favorite sitcoms via producer Chuck Lorre’s vanity cards. That reprieve came to an end on Thursday when, following Young Sheldon, Lorre’s 706th card aired, ranting about his “hatred” and “rage” towards Senate Minority Leader Mitch McConnell. 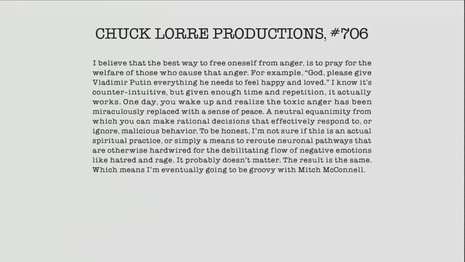 The episode of Young Sheldon that preceded the card, “White Trash, Holy Rollers and Punching People,” boarded on bigotry towards Christians despite there being a reprieve from Lorre’s politics on the show, as well.

Let’s hope he’s not backsliding and that we won’t be subjected to further rants and lectures, whether on his sitcoms or his vanity cards. He’s made it clear where he stands. No one needs to be reminded of it, least of all viewers who are looking to be entertained minus the propaganda.