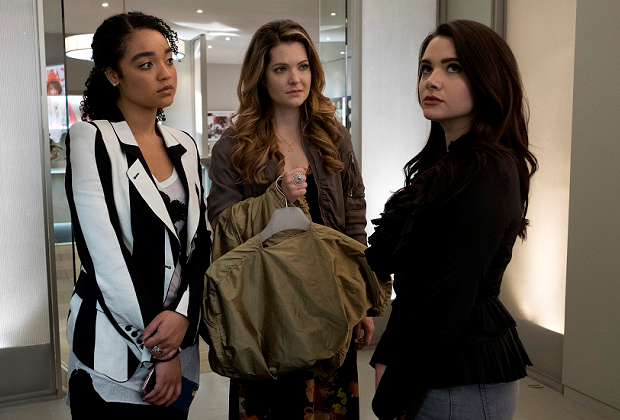 Freeform’s The Bold Type, which centers around three young women who work at fictional Scarlet magazine (based on real-life Cosmopolitan magazine), is one of the most left-leaning, not to mention inappropriate shows on television right now. (Freeform was formerly ABC Family and The Bold Type has been dubbed a teen drama, despite its extremely adult content.)

But the Tuesday, August 29 episode, “Before Tequila Sunrise” was like one, big, liberal party, with the majority of the show dedicated to Trump-bashing, genderless fashion and men dressing as women, liberal extremist feminism, tighter controls on Muslim VISAs into the U.S., a lesbian love story between two minorities, and two sex scenes- one straight, one lesbian, just for extra bonus points.

I’ll start with the main theme throughout the show, which was President Trump visiting New York City, an event that did not sit well with the characters on the show who live and work in the city.

I don’t remember any shows ever complaining about Obama’s motorcade interrupting their lives when he was president, but let’s give them the benefit of the doubt and assume that the writers didn’t create this storyline for political reasons.

You’d only be able to do so for about two minutes, as the snide, hateful jabs and digs at the President start coming at you right at the start of the show. Once again, the writers have indulged their biased, leftist agenda, but this time, it was pretty much overkill.

Main characters Kat (Aisha Dee), Jane (Katie Stevens) and Sutton (Meghann Fahy) are in a taxi headed to a pitch meeting at Scarlet but President Trump’s motorcade is interrupting the flow of traffic.

Sutton: How many times does Trump have to come back here? Doesn’t he live somewhere else now?

Editor Jacqueline (Melora Harden) is already at Scarlet waiting for staff to arrive to the pitch meeting when she gets word that Trump’s visit is keeping them from arriving on time. Her hatred is palpable and she references the infamous Senator Elizabeth Warren "Nevertheless, she persisted" line.

Jacquelyn: Did everyone quit?

Staffer: They're all running late because of the road closures.

Jacquelyn: Of course. Nevertheless, we will persist. I refuse to cancel a pitch meeting on account of that man. Jane, you first. Nothing political this time. We have that covered with the feature piece that Ella's doing.

Jane: Okay, um... Oh, here it is. Gucci, St. Laurent, and Burberry have all been experimenting with the concept of genderless fashion in their recent runways.

Jacquelyn: And we've covered it.

Jane: With Tilda Swinton and Jaden Smith, but genderless fashion isn't just for models and the celeb elite. Retailers have been marketing to everyday consumers like you and—

Jacquelyn: I'm not an everyday consumer.

Jane: Right--but I am, so I thought that I could just spend a day in genderless clothes, see if that makes people interact with me differently. I would wear androgynous suits, drop-crotch floral pants, and—

Jacquelyn: Stop right there. You had me at "Drop-crotch floral pants," but we need something more. Women have been donning menswear for decades and calling it subversive, you know? We need that extra layer.

Alex: Sorry, they shut down my stop, so I had to detour through Midtown, and then—

Jacquelyn: And in walks our extra layer.

Alex: I'm sorry? - I really like your concept, Jane, but we need the right man for the job.

Jacquelyn: Jane will tell you about the assignment. Let's get you doing the "Red Check" this issue.

Jacquelyn: You've got a problem with that?

Jane: So, guess what? Jacqueline took my pitch and gave it to Alex.

Jane: No, I didn't even get to pitch that one. Now, instead, I'm writing the monthly quiz.

Sutton: This is going in your pro-"incite" column, isn't it?

Jane: There's not a lot of political real estate here, so...yeah, it's something to think about.

Sutton: Hey, which one did Alex take?

Jane: This androgynous fashion piece. I wasn't even that excited about it, but it was still my pitch.

Later, Sutton visits Alex (Matt Ward) to pitch herself as his stylist for a genderless fashion story. Of course, she wants him to wear a dress and gauge the reaction he gets while wearing it.

More men in dresses? Maybe Project Runway’s Aaron was right and this really is the way fashion is headed. God save us all.

Meanwhile Kat receives a call from her love interest Adena, a Muslim lesbian artist who has been working in the U.S. and was flying back here after visiting France. She tells Kat that she is being detained at the New York airport and is being sent back to her home country in the morning. The phone call is cut short, though and Kat worries that her phone was confiscated.

Kat: Do you think they took her phone? Like, can they do that?

Sutton: I think they can do whatever they want.

Jane tries to call an Immigration Hotline to help Adena, but of course, the call volume is “extremely high” and she’s put on hold. Kat ends up buying an $11,000 first-class ticket, the only available seat on the flight, to go home with Adena. (Kat later chickens out at the last minute and stays in America.)

At least the writers were honest and presented a situation that would and should flag anyone who may present a risk to our country. It’s not that Adena was turned away just because she was Muslim. There were extenuating circumstances.

Her work visa wasn’t extended in time and she took a risk by applying for a visitor’s visa. Because she bought a one-way ticket and has no other address than the one in her Muslim home country, she was flagged. Rightfully so, despite the tears and sympathy the writers tried to drum up for her. Yes, it may cause inconveniences for innocent visitors to the U.S., but that’s a small price to pay to keep our country safe.

In another story arc, Jane is considering taking a job with Incite magazine because it would afford her more opportunities to write the political stories she craves. To entice her, the magazine sends her a story they recently featured entitled “Feminism Cannot Exist Without Intersectionality” that includes a photo of a sign held up at the Woman’s March that reads, “Grateful to the women who marched before me. Proud to march for the women who come after. #WHYIMARCH.” 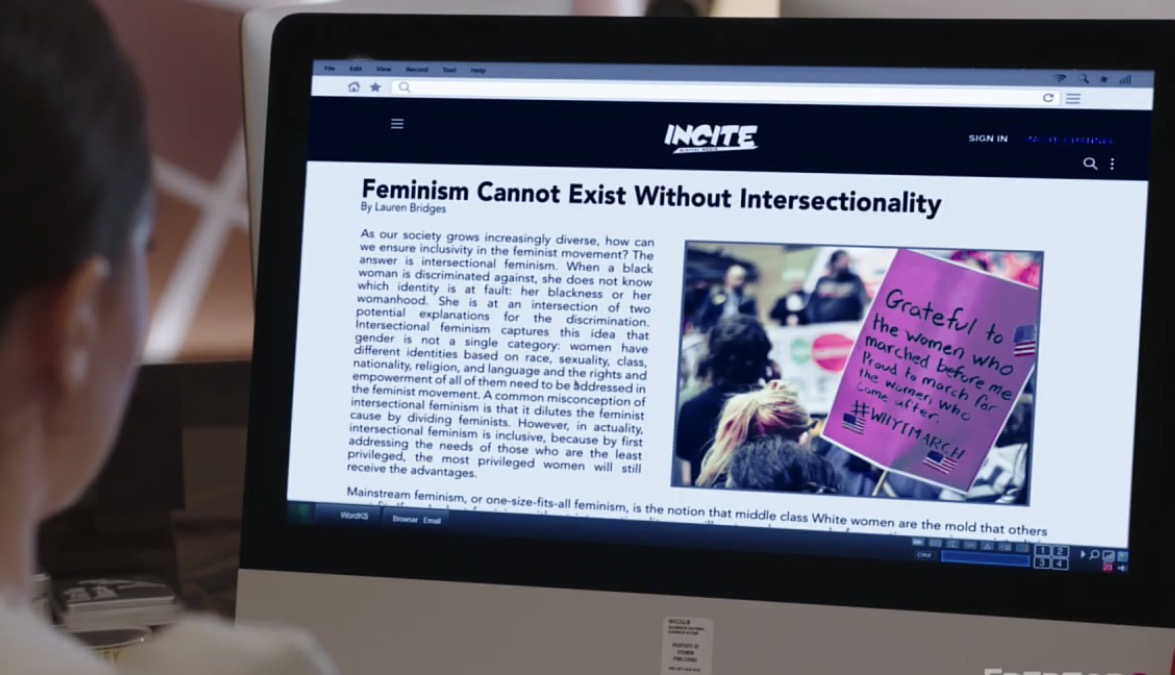 Which is interesting given the first line of the article itself. “As our society grows increasingly diverse, how can we ensure inclusivity in the feminist movement?”

Perhaps by truly honoring those women who “marched before?” You know, women like, Susan B. Anthony and Elizabeth Cady Stanton, who were all adamantly pro-life (if you read their quotes, you will see that they weren’t simply opposed because abortion was illegal in their time. Their words were strongly opposed to the act itself and were always vehemently in defense of human life.)

Maybe if liberal feminists had truly honored those who marched before them, pro-life women wouldn’t have been excluded from the Woman’s March this year. But they can’t have it both ways by claiming to seek diversity and inclusivity while only allowing leftist, pro-abortion feminists to march for all women.

There are more digs at Trump, as Jane tries to leave work with her love interest Ryan (Dan Jeannotte), who just lost his job at competing male magazine Pinstripe, when they see a commotion in the streets in front of the building of people chanting "No More Trump!"

Ryan: Oh, hey, avert your eyes. You weren't supposed to see me like this.

Jane: With what I can only assume is stolen stationery, a thing that looks like a sex toy, and lube samples?

Jane: I really am sorry about your job.

Ryan: No, we're not doing this. We've already had our tearful good-bye.

Ryan: You were devastated.

Jane: What is going on?

Ryan: Yes, some of us have plans to drink alone tonight.

Doorman: The president's having dinner next door, and there are protesters, so the Secret Service shut down the block.

Jane: I guess we go back up and wait it out?

Notice how calm and aloof they become when they learn it was the protestors who got the street shut down, compared to their anger when it was Trump’s fault?

Later, Sutton runs into an office where Jane and Ryan are talking, and excitedly says, “Hey, guys! I think we can see Trump!”

They all run to the window where Alex is already watching from.

Jane: What exactly am I looking for?

Alex: I said I thought I saw the motorcade.

Ah, yes. Such a lovely, diverse and inclusive show, offending conservative viewers (if there are any left at this point) at every turn. I can’t wait to see what the season finale will bring next week.