I’m convinced that Hollywood creates much of its “entertainment” from Mad Libs. You remember Mad Libs, don’t you? They were sheets of paper with text on them including blank spaces for adjectives, nouns and verbs. Really a brilliant concept, designed for group/party fun.

It must be how they came up with The Real O’Neals or the Ghostbusters remake. Gay character and his awful, backward Catholic family make fun of Christianity -- with the help of bigoted anti-Christian, gay, sex-advice columnist Dan Savage, who is a producer on the show. Or group of actresses playing exact same roles as men who did it better go through the motions doing a politically correct remake. See? It’s easy.

What it means is that liberals never see anyone as a human. They see us as checkboxes. Hey, we need a __________ here. So we’re more diverse. Not a human, just a seat filler, like at the Oscars. That anti-human attitude explains their attitudes on faith, abortion, politics and a host of other issues.

It also takes us to the beginning of this week’s crazy liberal list.

Walls Are Evil, But There Are Cannibals On The Other Side: Your politics don’t matter. Whatever conservative election view you have, liberals hate you. They hate Trump. They hated the other 16 GOP candidates. They hate Evan McMullin. More importantly, they hate what you believe. Think we should control immigration? You’re evil. So, they make a movie about how evil it is to keep out the world and end up making a case for building the darn wall. Make a post-apocalyptic movie and use to make fun of whatever cultural issue you want -- like The Handmaid’s Tale. And The Daily Beast naturally is thrilled. In The Bad Batch, we have our heroine, “a striking young woman cast out by the powers that be, through a colossal metal fence separating Texas from a dystopian wasteland.” It wasn’t designed to bash Trump, just those opposed to illegal immigration. But filmmaker Ana Lily Amirpour has adapted.  Actual quote: “Between the wall(s) and the xenophobia, it’s hard not to see Amirpour’s film as a rebuke of Republican presidential nominee Donald Trump’s hardline stance on Mexico.” So, walls are bad, even when there are cannibals on the other side? Have they ever watched The Walking Dead? 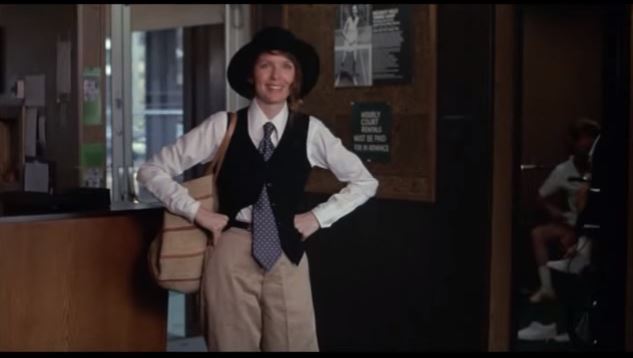 If You Want Women To Look Like Dudes: Then this clothing in just your style. While it’s not exactly apocalyptic, straight people everywhere probably think it is. This isn’t just the Annie Hall look, which honestly, was horrendous. This is worse, it’s “the fashion industry’s recent fascination with androgynous gender presentation and create both clothing and space for a multitude of identities across the spectrum of sexual preference and gender identity,” wrote our friends at The Huffington Post. Basically, liberals want everyone to have flexible gender and sexuality. They think their clothes campaign will help. I guess if you can’t tell who or what someone is, you will still Tinder them? Maybe libs will. Actual quote: “From countless articles mapping the rise of androgynous models to the influx of highly visible gender-neutral clothing to celebrities challenging gender-based expectations through fashion, the queering of the fashion industry is a phenomenon that parallels the rapid acceptance of the LGBT community by mainstream society.” Put simply: If you want to act normal, wear clothes that show you are normal, the fashion industry wants nothing to do with you. This is what my MBA program would have called a market opportunity.

Let’s Try to Use ‘Star Trek’ To Make A Ridiculous Point: Every oped writer ties whatever issue he or she cares about to news. This week in pop culture, we celebrate the 50th anniversary of one of the most influential TV shows ever -- Star Trek. Embracing my inner and outer geek, I have always loved this show. It envisions a future where we all just get along and then go into space to make others do the same, whether they like it or not. A quick glance around the globe might undermine creator Gene Roddenberry’s original vision. Nevertheless, Salon idiots (ahem) tried to co-opt Trek to bash Trump. Because the 4 billion other anti-Trump pieces it has run weren’t enough. What Salon serves up is a horrendous mishmash of Trek tropes nailed clumsily to attacks on Trump. Like: “Imagine a son or daughter of an undocumented immigrant on Trump’s crew. That’s not the galaxy Trump that lives in.” That’s something. It’s not writing, but it’s something. Actual quote: “Let us hope that it is Trump who is the alien species, not those of us who believe in science, exploration and a peaceful universe. After all, you can’t build a wall in space.” If you want to boldly go into hackery, at least do it well. Even Salon is rarely this poorly written. Author, not that he’s deserving of that term, Ethan Gilsdorf does Trek, Trekkers/Trekkies a disservice.