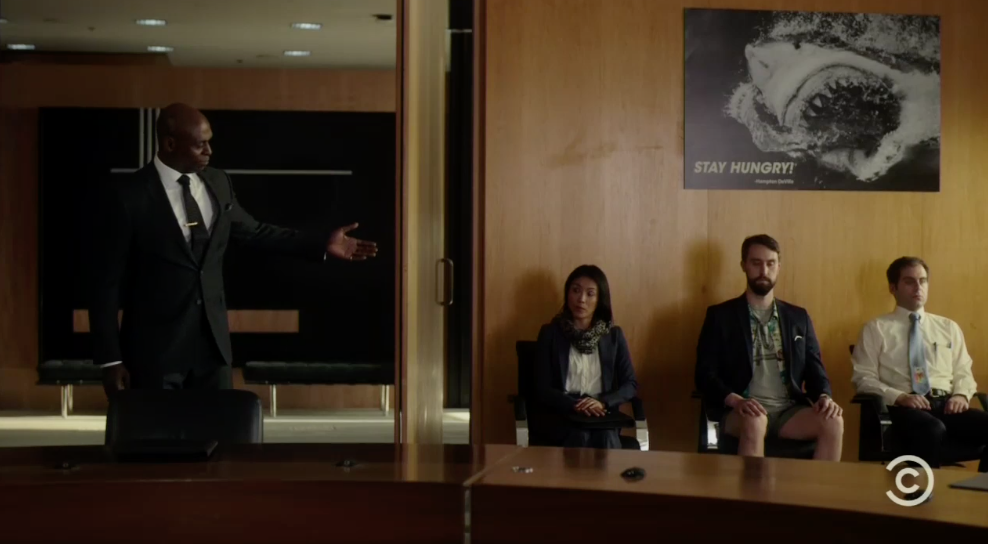 In addition to being anti-business, Comedy Central’s new show Corporate is also anti-religion. On Wednesday’s episode, Casual Friday, Hampton Deville’s CEO announces, “We all know there's no God, but there is a ton of money to be made in His name,” in anticipation of meeting with power/money-hungry Glorious Salvation Ministries representative Alyssa Armstrong.

CEO Christian Deville meets with the cross-bearing representative of the largest group of mega-churches in the country to discuss how Hampton Deville will furnish them with flat screens, massage chairs, and snacks, in return for the corporation’s logo being broadcasted all over the churches. Or as Alyssa puts it, “Every time my congregants go to pray, they'll be thinking of the Father, Son, Holy Spirit, and Hampton f*cking Deville.”

CEO: As you can see, Hampton Deville has the ability to bring your churches into the 21st century. Our flat screens will broadcast the gospel of Jesus in 4k resolution. We want to help you create an immersive religious entertainment experience. And if somehow your congregants manage to lose interest, you can wake them up with... the touch of God. So what do you say? Shall we... Consummate this holy union?

Alyssa: What you have presented here today is blasphemy. You want me to pay millions of dollars so you can splatter your corporate logo across my church? Well, I have a counteroffer. $1. That's how much I'm willing to pay you. Now, the question is…are you smart enough to say yes?

CEO: You have my attention.

Alyssa: Never in the 6,000-year-old history of the world has a corporation been offered a product placement opportunity like this. Every time my congregants go to pray, they'll be thinking of the Father, Son, Holy Spirit, and Hampton f*cking Deville. So you all are going to supply my churches, and I'm going to pay you nothing. And you are going to thank God for the gift I have given unto you.

Of course the woman representing the churches would be wearing a habit-like outfit and a large cross necklace while dropping f-bombs and raising a middle finger. While figuring out the terms of their deal, Alyssa makes clear her power over her churches: “My congregation doesn't listen to pop-up ads. They listen to me. When I told them to burn ‘Harry Potter,’ sales of the book went up 40%. J. K. Rowling still owes me for that.”

Our two main characters also discuss their atheism, suggesting that the only people who can reasonably believe in God are professional athletes since “their lives are amazing.”

Jake: When did you stop believing in God?

Matt: I was 12. I drank some of the holy water at church, and it gave me salmonella.

Matt: Uh, what made you stop believing in God?

Matt: Who are the 90% of people who still believe in God?

Jake: Professional athletes. They're rich, hot, and their bodies haven't betrayed them yet. Their lives are amazing. Why wouldn't they believe in God?

In addition to the episode’s anti-religious theme, employees are rioting against the dress code by taking their shirts off. When Matt makes the horrific mistake of suggesting that men and women’s chests are different, this eye roll inducing conversation plays out:

Matt: Okay, fine, but nobody else take their shirt off, all right? I mean, Paige, obviously you can't.

Paige: Uh, wait, what does that mean?

Paige: So what? If you're a guy, you could take off your shirt, but if you're woman, you can't? That's sexist.
Matt: Okay. Um, I know that since I'm a man, telling you what is or isn't sexist is sexist. But you can't take off your shirt. Because you're a woman. But we're not sexist.

A few weeks ago, main character Matt fantasized about beating up God. Just 6 episodes in and it’s already clear that Corporate will be yet another show obsessed with attacking God (literally) and the people who believe in Him.