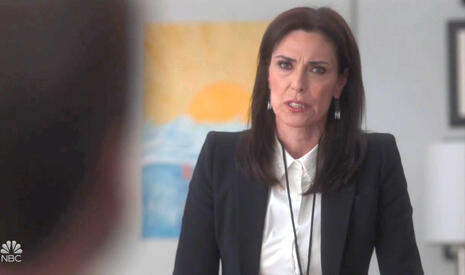 NBC’s New Amsterdam, now in its fourth season, continues to be as woke as ever, but now they're starting to admit it.

At the end of last week’s episode, it was revealed that Dr. Veronica Fuentes (Michelle Forbes) is taking over to replace Dr. Max Goodwin (Ryan Eggold) as the new medical director at New Amsterdam Hospital when he moves to London. And, on the October 12 episode “Seed Money,” the audience is meant to see her for the ruthless and unlikable person she is.

According to the bleeding-heart Max, Veronica is a "corporate shill" who is "ruthless, corporate, financially motivated," and "completely lacks the New Amsterdam spirit." They butt heads when New Amsterdam is gifted land worth $10 million and have to decide how it will be used.

They check out the land and it's in a clearly underprivileged neighborhood, where people don’t get the medical care they need due to the time, cost, and distance. In the most serious example, one man they meet doesn’t have his Type 2 diabetes in check and ultimately needs to get his foot amputated. The culprit looks to be the high amount of fast food "Chicken O’Cluck" restaurants, rather than more healthy options. Max thus decides that he’s going to use that land for a grocery store, and one that’s non-profit.

Veronica's true colors come out when she not only reveals to him she’s going to be selling the land to the highest bidder, to a company that will put in more Chicken O’Cluck locations, when he leaves, but she explains why she was brought in, saying, "I have never in my entire career replaced a successful medical director." She also calls out his liberal ways.

Veronica: Under your leadership, New Amsterdam is running a deficit of 21 million per quarter. That is $84 million a year. Covid dried up all your most profitable revenue streams, and profit margins are down overall.

Max: Less profit equals more care. What else is the money for if not to spend it on the people who don't have it?

Veronica: Yet not all patients. In your efforts to end systemic racism and bias, you have unfortunately alienated so many of your white patients.

Max: If amplifying other voices is so threatening, then maybe--

Veronica: Max, your lobby looks like a progressive piñata just exploded. There are so many memorial plaques and so many apologetic commemorative poems. I mean, you might as well be getting a checkup at a Bernie Sanders rally.

Max: And if money is all you care about, then why don't you just turn New Amsterdam into a private hospital and shut the doors on anyone who can't pay enough to live?

Veronica: I will take that under consideration.

Veronica: I have a lot of good ideas for New Amsterdam, including what to do with that land in Desmond Park. I am gonna sell it to the highest bidder, and I am going to put that money into our endowment.

Max: Great, so not a single cent is gonna go to patients or research or new facilities.

Veronica: I already have an offer.

Veronica: Unifell. Huge corporation. You might know them as the parent company of Chicken O'Cluck-- no, hear me out. They want to build a factory. What does that mean? More jobs for the community.

Max: Making the very food that's killing them. There's no way I'm signing off on that.

Veronica: I don't need you to, Max. I'm gonna wait you out, and then I'm gonna undo every bloated program, every underfunded clinic, and everything that you've built on very shaky ground. It's coming down.

There certainly are plenty of examples of how "progressive" the show has been throughout its four seasons. But, if the villainous Veronica is bringing the issue up, viewers can be sure they’re meant to dislike her criticism.

In other news, Dr. Reynolds (Jocko Sims) gushes about being in "a blossoming and healthy polyamorous relationship." He was also involved with a storyline about a biracial adopted daughter in a white family who took pills in an attempt to lighten her skin. He explains to her parents the microaggressions she suffers through living in an all white community:

Reynolds: I mean, do you know what happened at her tournament? A bigoted official didn't believe Carrie was with her team when she tried to rejoin them, and then her coach dismissed her experience of the encounter. Called it all an honest mistake.

Dad: [Scoffs] It sounds like Coach Jessa was clumsily trying to handle an awkward situation.

Reynolds: Right, but in the process, she racially gaslit your daughter.

Finally, in an unrelated scene, another character bemoans, “I'm saying we all know that when women are disruptive, let alone women of color, they're labeled crazy or difficult or a [whispers] Bitch. And when Max does it, he's a maverick with dimples.”

It would be nice if New Amsterdam were to get less woke under Veronica's leadership. She's supposed to be the bad guy here, but I, for one, am rooting for her.

Conservatives fight back! Contact the show’s sponsors for this episode to let them know you don’t appreciate such a one-sided perspective: Capital One; Subway; Geico; McDonald’s; Apple; United Healthcare; Ford Motor Company; and American Express.