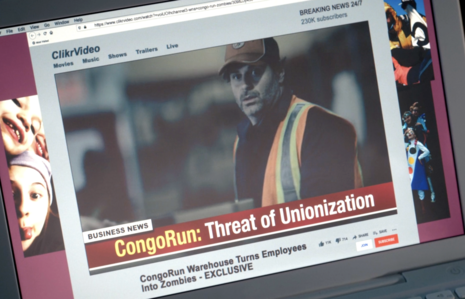 Evil (formerly on CBS and now running on Paramount+), a series about a forensic psychologist teaming with a Catholic priest-in-training to investigate supernatural events, has targeted racism in the past, but their latest episode was about the evils of corporations and the need for unions.

On the July 18 episode “Z for Zombies,” the evil entity is a corporation called CongoRub. Think Amazon, complete with an assembly line of zombie-like workers who aren’t even allowed the time to go to the bathroom or put a bandaid on their injuries.

Preteen girls Lila Bouchard (Skylar Gray) and Alex Metellus (Gloria Manning) are going through a zombie horror movie phase, when they think they see a zombie in Alex’s bedroom. It turns out to be Alex’s dad, Brandon (Francois Battiste), who, you guessed it, is one of the zombified workers at CongoRun.

Lila and Alex do some digging into the company and find an investigative video report about the need for unionization there, titled "CongoRun Warehouse Turns Employees Into Zombies," which is how we learn about the livelihood, or lack thereof, of these workers.

The video points out that the company is the third-richest in the world, "But, accusations continue to grow that CongoRun mistreats its employees. All are non-union, many are forced to work without regular bathroom breaks, or even routine safety precautions."

The two young ladies go to a mystical shop owner who tells them the story of slaves in Haiti who were told by slave drivers that if they committed suicide, they would forever roam the earth as zombies. The woman gives them two potions, a blue bottle to give to Brandon, and a green bottle to give to "the slave driver."

Brandon is saved when he oversleeps the morning after the girls put the blue potion into his dinner. When calling his boss he is told that there was a gas leak during his shift, permanently injuring the workers who were there.

He goes on to rally the other workers who show up at his house to unionize. However, his boss, Mr. Hamlin, shows up and threatens Brandon with termination should he convince the other workers to join the union. Sure enough, Mr. Hamlin’s "the slave driver." The girls put the green potion onto his gum just before he heads out.

Brandon: Wait, wait, wait, wait. The question isn’t whether we’re angry. Of course we are. Forty of our friends are out of work and in the hospital.

Woman: And they can’t even sue. They have to go to arbitration.

Brandon: Wait, wait, wait. The question is do we have enough support to unionize. Our power is in a union.

Lila: Looks like the blue bottle worked. Think your dad’s not a zombie anymore.

Brandon: We know that anger dissipates.

Brandon: How did you know that we were meeting?

Hamlin: I just, uh, wanted to give you an update about your colleagues.

Woman: This isn’t for management. This is for the workers.

Hamlin: Look, look, look. This is not a time for anger. This is a time for prayer and compassion.

Hamlin: Our CongoRun family is hurting.

Brandon: You’re not hurting. You’re trying to kill us.

Hamlin: Hey, the solution, the solution is never a union. You trade the face of the boss you know for the one you don’t. Because the union becomes your boss.

Hamlin: A boss you’ll have to pay. You’ll have to pay dues and go along with their rules or they won’t protect you anymore. But the thing is, you don’t need any protection.

Woman: We want to pay dues.

Hamlin: CongoRun will always take care of you. We’re like a family.

Hamlin: Brandon, I would suggest you end this if you plan on keeping your job.

Brandon: Mr. Hamlin, you can’t fire me for unionizing.

Hamlin: That’s not why I’d be firing you.

Lila: I need to re-wrap it.

Hamlin: You failed to come into work yesterday.

Brandon: Failed to come into work and get sick from your little gas attack.

Hamlin: Well, you still failed to show up. A fireable offense. I would disband your little communists here.

Brandon: No. In fact, you can leave my house right now, sir.

Hamlin: Excuse me. Thanks. Little girl? I’d tell your dad it’s a bad economy to be out looking for a job.

The next morning a company executive shows up to inform the Metellus family that Mr. Hamlin has been fired for showing up to work drunk. In fact, Brandon is being offered the job to replace him, at 10 times the salary, though he’ll have to give up his unionization efforts.

While the scene ends without Brandon giving his answer, a subsequent one reveals that he’s accepted. Only it’s at a price. The man works from home, which enables the girls to see that he has become the slave driver, as he monitors the workers he oversees through security cameras, giving them instructions, such as reminding any stragglers that it’s not yet time for their break.

Such an ending should not be surprising; Evil is not known for happy endings. Yet it seems to be a bit of a stretch for a corporation to be this week’s evil entity when previous episodes have featured demons from the Catholic and Islamic faiths. Any way to wedge in a leftist agenda, I guess.