Lesbian Love Triangle Leads to Abortion on New CW Drama: ‘I Was in No Place to Be a Mother’ 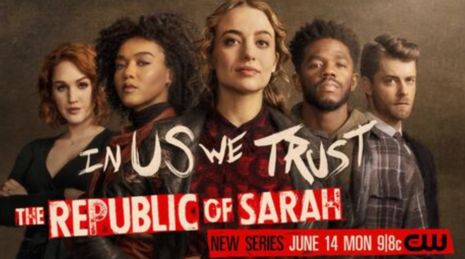 As if the CW’s The Republic of Sarah wasn’t melodramatic enough, the latest episodes of the new show have involved a lesbian affair Alexis Whitmore (Nicola Correia-Damude) is having with AJ Johnson (Nia Holloway), despite being married to the town's former mayor, William Whitmore (Noam Jenkins). In the July 19 episode “A Show of Hands,” that affair caused an abortion.

The pregnancy storyline found its way into the episode at the very start. In one of the first scenes, AJ’s friend notices how distracted she is, which is on account of having found a positive pregnancy test that she assumes to belong to Alexis. Not only is AJ distracted by every baby she sees, but she’s handling the pregnancy news with an air of self-entitlement. She assumes Alexis planned to get pregnant and ponders, "Maybe she's trying to eat her cake and have it, too. She keeps this from me, she can enjoy our little soirees for another month or two before she trades in her heels for high chairs."

AJ really blows it later in the episode when she confronts Alexis about finding the pregnancy test. AJ is "pissed off" Alexis never came and told her about it and says, "Look, I get you're married. That was a part of the deal when we started. But a baby is different. And then you fill my head with BS about you being crazy about me. Meanwhile, you're starting an 18-year re-up with your husband. Behind my back." Before Alexis can respond, her husband William appears and AJ congratulates him on the baby. But it quickly becomes clear William didn't know.

The next time the women are alone together, we learn why. Alexis reveals she had an abortion because of her confusion over the state of her love life, saying she "was in no place to be a mother:"

AJ: Thanks for coming. Sarah's out, so I thought we could talk.

Alexis: You want to know why I didn't tell you about the baby? Huh? Because there is no baby.

Alexis: I had an abortion. I missed my period and I took a test and I had no idea where my marriage was going and I had no idea what you and I were doing and I was, I-I was in no place to be a mother. So I told William that I was gonna go see an old college friend and I went to the city and... And I wanted to tell you. Straight.

Alexis: No. Stay away from me.

AJ: And I was confused and I was hurt.

Alexis: Yeah, well, you know, so am I, AJ, so am I. And I'm also married to a good and compassionate man who doesn't deserve any of this. So... I am going to go to New York with that man and I'm gonna see if there's anything left of our marriage that we can save.

AJ: What did you tell him about the pregnancy?

Alexis: That is none of your business.

AJ: Does he know about us?

Alexis: No. There is a world where this ended so differently. The way I felt about you... Goodbye, AJ.

It appears that AJ and Alexis are done, as AJ tells her roommate Sarah in a subsequent scene.

The whole situation is tragic, not merely for William, who was an innocent party in this, but even more so for the child Alexis conceived with him and then aborted to keep her lesbian love affair going. Not only was William robbed of fatherhood, and that child robbed of life, but ultimately, Alexis was robbed of motherhood as well, though she may not realize it until later in life.

Alexis may have wanted to continue her life pretending it never happened, but abortion is a big deal and the consequences will reverberate.