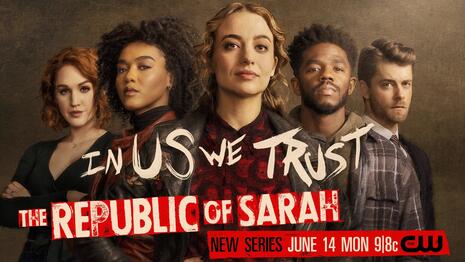 CW’s latest drama has a curious premise to wrap your head around. In order to save their town from a “giant bloodsucking corporation,” heroine schoolteacher Sarah Cooper (Stella Baker) rallies the townspeople of Greylock, New Hampshire, to declare themselves an independent country in June 14’s pilot episode of The Republic of Sarah.

When Mayor William Whitmore announces the arrival of Lydon Industries, a “billion-dollar corporation” moving in to Greylock to extract the valuable mineral coltan, the Lydon representative sent to the town is Sarah’s estranged brother, Danny Cooper (Luke Mitchell). Danny is an arrogant executive confident people in the "Podunk town" will sell their land to the company then "go back to their worthless little lives with all their worthless little friends."

There’s a predictable scene where Sarah stands in front of tractor to stop Lydon from from starting their work literally a day after plans were first presented to the town for mining. “You gonna run me over in front of all these people? Lydon Industries is a publicly traded company, right? How does flattening schoolteachers usually play with the stockholders,” Sarah asks her brother.

To more effectively stop Lydon, Sarah gets the idea for the town to declare independence from a cartography class she took in college where she learned of a quirk in the U.S.-Canada border treaty that places Greylock in no man's land.

Of course, there's also a lecture about how the Native Americans there had a "thriving civilization" until "colonists showed up and pillaged, plundered, and poached them from their homes... then went on to divide up a continent that was never theirs to begin with."

AJ: Are you suggesting we secede from the Union?

Sarah: You have to be a part of the Union before you can secede from it. We don't qualify. The first people who lived on this land were the Abenaki. For hundreds of years they had a thriving civilization until a bunch of French and English colonists showed up and pillaged, plundered, and poached them from their homes. Those colonists then went on to divide up a continent that was never theirs to begin with.

Long story short: We have the U.S. And we have Canada. The border between the U.S. and Canada was established in 1842 by the Webster-Ashburton Treaty. Part of that border is set by the Woonsock River, which flows along the southern edge of town. But check it out. When the Canadians mapped the area in January of 1842, they drew the river in one place.

When the Americans mapped it four months later, they drew the river way further south. Why? Because the river jumped between the dates that the maps were drawn. It happens for all kinds of reasons-- erosion, floods-- it's pretty common. Here's the uncommon part. The treaty says that everything north of the Woonsock is Canada. And everything south... ...Is America. The river jumping left a huge chunk of open land in the middle. Greylock sits in this land. Which means that this town was never legally claimed by either of its national neighbors. If we declare Independence, we'd gain total control over what happens within our borders, including who does and does not get to drill on this land. The way to save our town is to turn it into a country.

AJ: Are you insane?

Luìs: I-I want to stop the drilling as much as the next person, but declaring Independence-- it's... Insane.

Sarah: Okay, guys, chill. I'm not suggesting we actually start a new country. We just got to make Lydon think we are. We declare Independence using this map loophole, and the whole thing will get tangled up in court. Lydon will have to stop drilling, which will give us time to figure out how to save Greylock for good.

AJ: Let's say we go along with this. How exactly do we declare Independence? We just text the president, "Boy, bye"?

Sarah: We hold a vote. If the majority of Greylock says yes, we're in. Lydon started eminent domain proceedings way before anyone in this town even knew there was coltan under our feet. If they want to play dirty, fine. So can we.

Sarah faces blackmail from Lydon's legal counsel to stop the independence campaign and other pressures, but it only reinvigorates her. She reveals the quest for independence was initially just a ploy to tie things up in court, but now urges the town to form its own country for real to send a message to the "giant bloodsucking" corporations:

Sarah: I've changed my mind about independence. The whole thing started as a tactic to slow the governor down so that we could gain some leverage over the mining company. Declaring Independence was just a trick. But I don't think it should be. I think we should do it for real.

Sarah: I believe in this town, William. I believe Greylock is worth saving. Listen, I'm no hero. It should be obvious to everyone by now I have no idea what I'm doing. I certainly don't know how to run a country, let alone start a new one. But here's what I do know. I know that I care about the people in this town. I know I'm not gonna let them get steamrolled. And I know that Lydon Industries, and every other giant bloodsucking corporation that thinks they can walk all over average people in pursuit of a quick buck, are more than welcome to go right to hell.

Thanks to Sarah and her friends’ grassroots efforts to rally the town in favor of their cause, they are able to declare independence after a simple vote. Mayor Whitmore resigns immediately and, without any formal leader, Sarah is left in charge. The episode ends with her being arrested by the FBI, since she “conspired to overthrow the authority of the American government, a federal crime as described in U.S. Code Title 18, Section 2384.”

Aside from the anti-corporate message, The Republic of Sarah indulges in unrealistic inclusivity. In one of the whitest states in the whitest corner of the country, Sarah’s potential love interest, Grover (Ian Duff), is black, as is her lesbian roommate, AJ (Nia Holloway). The owner of the local diner, Luìs Vidal (Salvatore Antonio), is a gay Latino. One of Sarah's high school students, Tyler (Forrest Goodluck), is Native American and called "Squanto" by a white bully oozing toxic masculinity.

I think The People's Republic of Sarah would have been a more accurate title.

Conservatives fight back! This episode amplifying the caricature of corporate greed was brought to you by Capital One; Dove; Downy; Subaru; Walmart; Liberty Mutual; Subway; and Taco Bell.