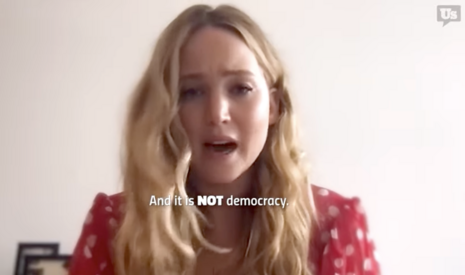 Oscar-winning actress Jennifer Lawrence brought the drama on Thursday when a video of her promoting the Democrat Party’s brazen attempt to federalize state and local elections was dropped online.

Her theatrical chops were on full display as she acted as if she’s non-partisan and that the “radical wing of the Republican Party” is “actively dismantling Americans’ rights to vote,” instead of what they’re really doing, which is protecting the integrity of elections.

But, worse than her villainous account of the GOP was her shilling for the so-called “For the People Act” (HR 1, S 1), which she said would “reverse … anti-voting laws.” She urged people to contact their Senators through RepresentUs, which she is a board member of and claims is "an incredible non-partisan movement and anti-corruption organization working to unrig America’s broken political system, and put power back in the hands of the American people." It’s also the terrible outfit that inflicted ugly naked celebrities upon us as part of a mail-in ballot awareness campaign in 2020.

Watch Lawrence’s despicable video for yourself:

Lawrence: Whatever your personal politics are, whatever side of the aisle you find yourself on, you need to know that your vote matters and that the outcomes of our elections are not maneuvered and manipulated. [Yes, that’s why so many states are implementing common sense election security laws.] In Texas, Georgia and Florida, and 44 other states, there’s a RADICAL WING of the Republican Party that is actively dismantling Americans’ rights to vote because they don’t have the numbers to win otherwise. [Then how did Republicans win 61 of 99 state legislative chambers?] Without GERRYMANDERING or shutting down hundreds of voting facilities within reach of minorities and specifically targeting and carving out people of color they can’t win. [Gerrymandering is done by both parties and most often Democrats oversee the voting facilities where significant numbers of minorities live.] But this is CHEATING. And it is NOT democracy.

There’s a law in the Senate right now called the FOR THE PEOPLE ACT and it can reverse these anti-voting laws and it can stop billionaires from being able to buy our elections. [Like Soros and Bloomberg?] It even says that all voting machines need to be made here in the U.S. But it’s going to take a lot of pressure from us to get it to pass…

Lawrence posted the video on Twitter with the message, “We only have a few days left before the Senate votes on the most sweeping anti-corruption bill of our lifetimes. Call your Senators now…”

Rather than stopping corruption, this radical bill would open up our electoral process to all sorts of unsavory shenanigans by gutting voter ID laws, making absentee ballots and voter rolls less secure, and mandating same-day and auto-registration, not to mention subjecting citizens and non-profit organizations to intimidation, harassment and retaliation by political opponents and the IRS.