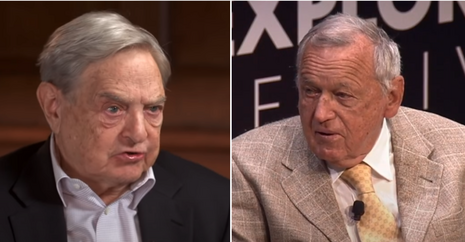 A leftist “dark money” group funded with millions of dollars from both liberal billionaires George Soros and “foreign national” Hansjörg Wyss is attempting to make the atrocious and un-American H.R. 1 election overhaul bill a reality.

In addition, the group is also trying to sway lawmakers on “D.C. statehood” and the “Voting Rights Act Amendment.”

Fox News reported yesterday that the leftist Sixteen Thirty Fund “has spent $1.3 million on internal lobbyists to push the reforms while dishing out $480,000 to outside firm Keefe Singiser Partners between 2019 and 2020, according to disclosures.” In addition, “Maura Keefe, the former chief of staff for Democratic New Hampshire Sen. Jeanne Shaheen, heads up the shop.” The Fund also “paid $100,000 to Kountoupes Denham Carr & Reid to advocate on democracy reform and election integrity, including H.R. 1,” according to Fox News. Soros gave at least $16,568,483 to the Fund between 2016 and 2019. Wyss, who is of Swiss origins and has not disclosed publicly if he is even a U.S. citizen, gave a whopping $135 million to the Fund between 2016 and 2020.

Fox detailed the disastrous nature of H.R. 1, and how it would completely upend the U.S. electoral system:

H.R. 1 is the largest overhaul of the U.S. election law in at least a generation and covers many aspects of the voting process, including requiring states to automatically register eligible voters and offer same-day voter registration. The bill also requires states to offer 15 days of early voting and allows no-excuse absentee balloting, which 14 states would have to implement and the states that already allow it would have to conform to H.R. 1’s standards.

The May 11 edition of Special Report on Fox News ran an entire segment on the left’s overwhelming usage of dark money in the 2020 elections. The network also exposed Wyss.

Fox News broke down the structure of the Sixteen Thirty Fund. In doing so, Fox illustrated the vast and elusive liberal network that it operates under:

The Sixteen Thirty Fund is part of a massive dark money network managed by D.C.-based consulting firm Arabella Advisors, which was founded by Eric Kesser, a former Bill Clinton appointee and member of the Clinton Global Initiative. In 2019, Arabella was paid nearly $34 million for administrative, operations and management services to manage the four funds in Arabella’s vast dark money network.

The Fund was recently discovered to be behind a project push to kill the Senate filibuster. The New York Times even labeled the Sixteen Thirty Fund as “among the leading dark money spenders on the left.”