Hard to Stomach: Cosmo Cooks Up ‘Safe Way to Have Cannibalism Fetish’ 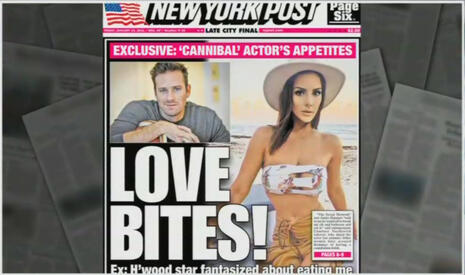 You might need a strong stomach for this next story.

Armie Hammer is in some hot water. Not literally, although, maybe he’d like to be boiled. You see, the actor is in trouble after allegations that some of his private messages involved sexual fantasies about cannibalism.

According to Cosmo, the Hammer story is “ignor[ing] the real issue” and “damaging” the cannibalism fetish community. So sad to see such a mainstream, respectable, upstanding group go through this. One could even say, it’s hard to digest.

To get to the bottom of it, they interviewed “Jet Setting Jasmine, a master fetish educator, licensed clinical psychotherapist, and co-owner of Royal Fetish Films” and published her response. How exactly does one get their master’s in fetish education, by the way? Maybe I don’t want to know.

Here’s what I’ve been seeing people get wrong in the conversation around Armie Hammer and the abuse allegations against him: His alleged cannibalism fetish itself isn’t the problem. The problem is, if the allegations are true, whether he used his power to groom these women into participating in a lifestyle they had truly not consented to.

For those looking to get to the meat of the article, she described the “safe way” to engage in the inhuman proclivity:

“The Armie Hammer stories bum me out so much not only because the alleged abuse is painful to read but also because they contribute to our society’s already distorted understanding of fetishes,” she bemoaned. Oh, yeah, it’s “society’s” fault and society that needs to be fixed. The poor, misunderstood cannibal fetishist!

She concluded, “We, as a society, need to increase our education beyond vanilla sex.” Presumably with some fava beans and a nice Chianti.