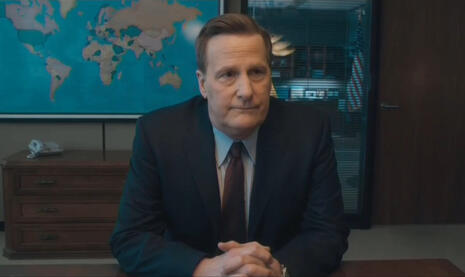 The show follows disgraced former FBI Director James Comey’s autobiography A Higher Loyalty, which was released in 2018. “Night One” premiered on September 27 and covered the time period leading up to election night, with its second and final installment to follow on Monday, September 28, to deal with the fallout after.

The liberal cast and crew fought to have the special air before the election after news that Showtime's parent company ViacomCBS planned to push it past the election. Lefty actor Jeff Daniels stars as Comey and he’s made his politics clear when making the rounds promoting his election special.

Writer and director Billy Ray is a dyed in the wool leftist believer in the Russian collusion conspiracy, telling The Guardian, “The tipping point in that election, the deciding factor, was the infiltration by the Russians. That came directly from James Clapper [ex-director of national intelligence]; that’s not a matter of conjecture; that’s fact. And they’re trying to do it again in 2020.” It’s 2020 and this guy still believes Clapper? Yup, his trust in what CNN and MSNBC were peddling the last several years is made clear in The Comey Rule.

For example, his scene recreating the London meeting between George Papadopoulos and Alexander Downer relies on a debunked narrative that Papadopoulos told Downer the Trump campaign knew about the DNC email hacks ahead of time and was coordinating with the Russians on them. This is what the Crossfire Hurricane FBI investigation into Trump was supposedly based on. In actuality, all Papadopoulos told Downer was that Russia had damaging information on Hillary Clinton, which was then retroactively assumed to be the DNC emails after the hacks were released despite the suggestion that it could have been a reference to Hillary’s missing 33,000 deleted emails from her private server.

Notice the explicitly false details inserted into the script:

Papadopoulos Russia. Wow, are those guys smart. Do you, uh... You know Professor Mifsud? Joseph Mifsud?

Papadopoulos: Maltan. Or Maltese. Maltanese. He's from fucking Malta, but he has connections in Russia. All the way up to Putin. We've been talking for months.

Downer: In what context?

Papadopoulos: Russia's got dirt on her. Lots of embarrassing stuff. Thousands of e-mails. And they made them all available to us.

Downer: Well, how did they get them?

Papadopoulos: Hacked straight out of the DNC and the Clinton campaign.

Downer: And the Russians are making them available to you?

Papadopoulos: "We have dirt on Hillary, and we want to help." That's a quote. They said they could release it anonymously, some big data dump on the Internet timed to do maximum damage to her.

Downer: Who else knows about this, George?

Papadopoulos: That's the beauty of it. No one. God bless America.

Comey’s memoir doesn’t go into the infamous Lisa Page-Peter Strzok affair, so this next scene is all Ray’s fantasy where he imagines Page and Strzok saying a paraphrase of their actual texts:

Except, in Ray’s reimagining, Strzok spells out the context liberals wish had been in there originally to protect Strzok from charges of trying to influence the election, along with some additional crudeness.

Page: "We" as in the Bureau? You just gave me a boner.

Page: That's who you're counting on? Oh, honey.

Next up, they take down Carter Page. In August 2016, the FBI was informed by the CIA that Page was a source for them. This should have prevented the subsequent FISA warrants on Page, but an FBI lawyer falsified evidence hiding his status as a CIA asset. It’s not entirely clear when the following scene is supposed to take place, but it is sometime after the first WikiLeaks drop on July 22, 2016. I could be generous and assume this scene happened before the FBI was informed about Page’s CIA status, but something tells me the rest of the series won’t clear his name.

Comey: Okay. If Russia were going to make other contacts inside the Trump campaign, who would be their likely targets?

Priestap: Yeah, we briefed you on him in '14, when he was working at Merrill Lynch Moscow. The GRU recruited him as an asset. The guy's a dope. He was living in his car not long ago. But he was the first member of Trump's national security team.

Comey: How high up is he? Who does he report to?

Priestap: In Russia or on the campaign?

There’s also a weird side plot involving Russian spies Igor Sporyshev and Victor Podobnyy, who are shown meeting on the National Mall plotting fake Facebook posts 15 months before the election and again the night before the election toasting each other for a job “well done,” presumably referring to their work electing Donald Trump. The problem is, Sporyshev and Podobnyy are Russian spies who were charged in 2015 and had no part in any 2016 election or Facebook schemes. But, way to keep the whole "Russian Facebook memes turned the election" narrative going.

In a scene that’s not in his memoir, when Comey makes the decision to notify Congress they’re reopening the investigation into Hillary’s emails just days before the election, his wife begs him not to so their daughters won’t have to see a woman losing the presidency to Trump. In the dreamt-up scene she calls Trump one of the “bad guys” the FBI puts away, even comparing him to the Ramsey Rapist, a serial rapist who attacked Comey’s house when he was a teen and put a gun to his brother’s head.

Patrice: It's too close to the election. It's much too close. Do you want him to win?

Comey: I can't talk about this with you anymore, Treecy.

Comey: Please don't make it seem like my choices are between loving my daughters or doing my job.

Comey: But protecting the Bureau is.

Patrice: No. You went there to put bad guys away. The Ramsey Rapists of the world. Not to help them become president.

Comey: You have no idea what I'm dealing with.

Patrice: Then tell me.

Patrice: You are going to convince everyone that she is Crooked... Crooked Hillary. And then what? I'm begging you...For once in your life, don't do your duty. Just let it go. Please?

Comey: Honey, I can stand the whole world being mad at me, I really can. But not you.

Patrice: Then listen to me. Jimmy.

Poor liberals have to end “Night One” with Trump’s victory, the women in Comey’s family are devastated and the FBI team is clearly sorrowful.

Trump was barely in the first half of this series, I don’t believe they ever even showed Brendan Gleeson’s face. Expect more Russian hoax propaganda and a whole lot of Trump bashing when Gleeson finally portrays him in part two. Stay tuned.