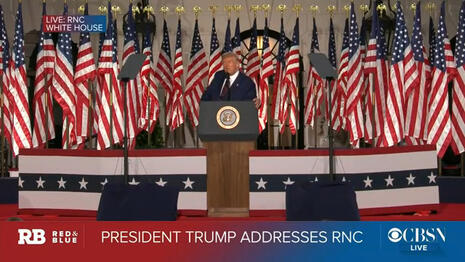 Actress Yvette Nicole Brown had plenty of nasty words for President Trump, calling him “evil” and “that vile cretin.” She added in Ivanka for good measure, saying, “She and her daddy are trash,” and mocking her as “the complicit little ‘princess’” speaking “at Dear Leader’s illegal #SouthLawn klan rally.”

She even knocked the live audience at the White House, tweeting, “There are more people on the #SouthLawn for this klan rally than attended his ‘coronation’ in 2017. And these idiots are risking it all, mask-less, during a pandemic. Racism trumps all, even their lives.” 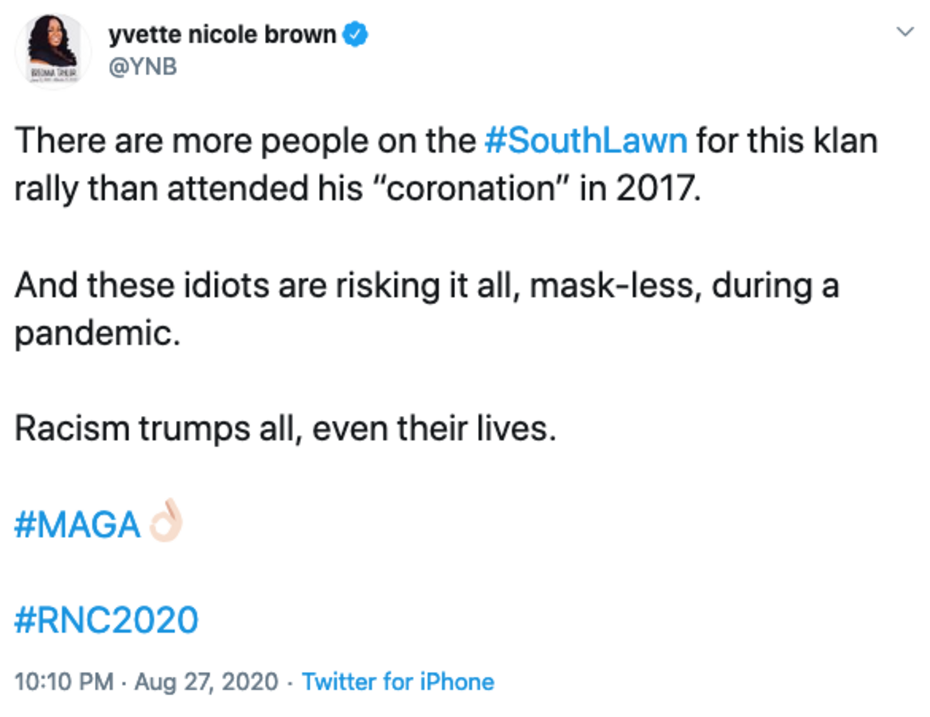 Brown was also not impressed with the massive fireworks display put on after Trump’s speech on the Washington Mall, in fact it seemed to scare her: “This narcissist just had the fireworks spell out his freaking NAME! This may be worse than we even imagine. Everyone, please vote and PLEASE #VoteBlue This mess is scary.”

Later Brown admitted, “I am no longer sane. That thing broke me tonight.” Well, at least she admits it.

Rounding up the rest of the usual suspects:

Rosie O’Donnell called Trump “the asshole” and declared him “unfit for office” saying, “he rips children away from parents puts them in cages - him the worst human living #AmericaOrTrump #RNCzombies.” Her the worst TDS sufferer living.

Sophia Bush tweeted, “Here comes the straight up racism, with all of the lies. Wow. Just wow.” Then she claimed, “He repeats a lie about abortion. There is no such thing as a ninth month abortion,” joining liberal media fact checkers in getting that wrong. 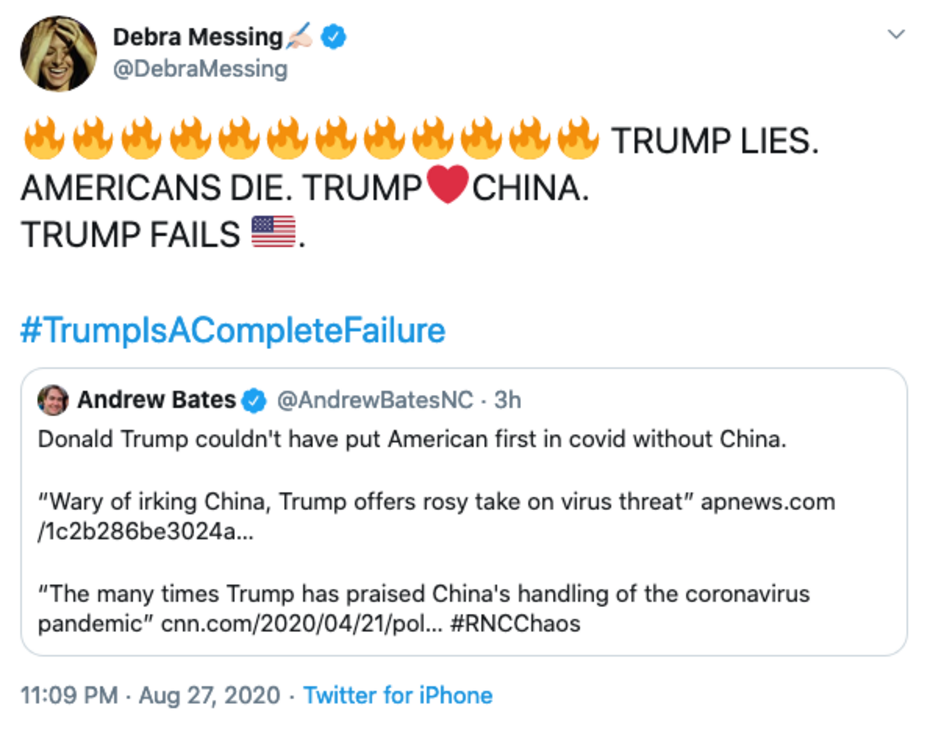 Aside from hating President Trump and his policies, the celebs bashed his performance, with Messing declaring Trump’s speech “#BORING.”

Patton Oswalt ripped Trump’s delivery, calling him “#LowEnergyTrump,” and implying that Donald Jr. was on cocaine during his speech on Monday and “shoulda saved some for senior.”

Reliable lefty Rob Reiner was relatively quiet all night, aside from retweets, only popping on to blast Trump’s speech as “Boring Bullshit.”

While many Americans watched a political convention, others saw creeping fascism and hated on Trump supporters.

Mia Farrow intoned: “Tonight st[sic] the RNC i see a dictator & his cult” and “This crowd, packed together without masks brings to mind Jonestown - the adoring cult, daring death for Jim Jones.” 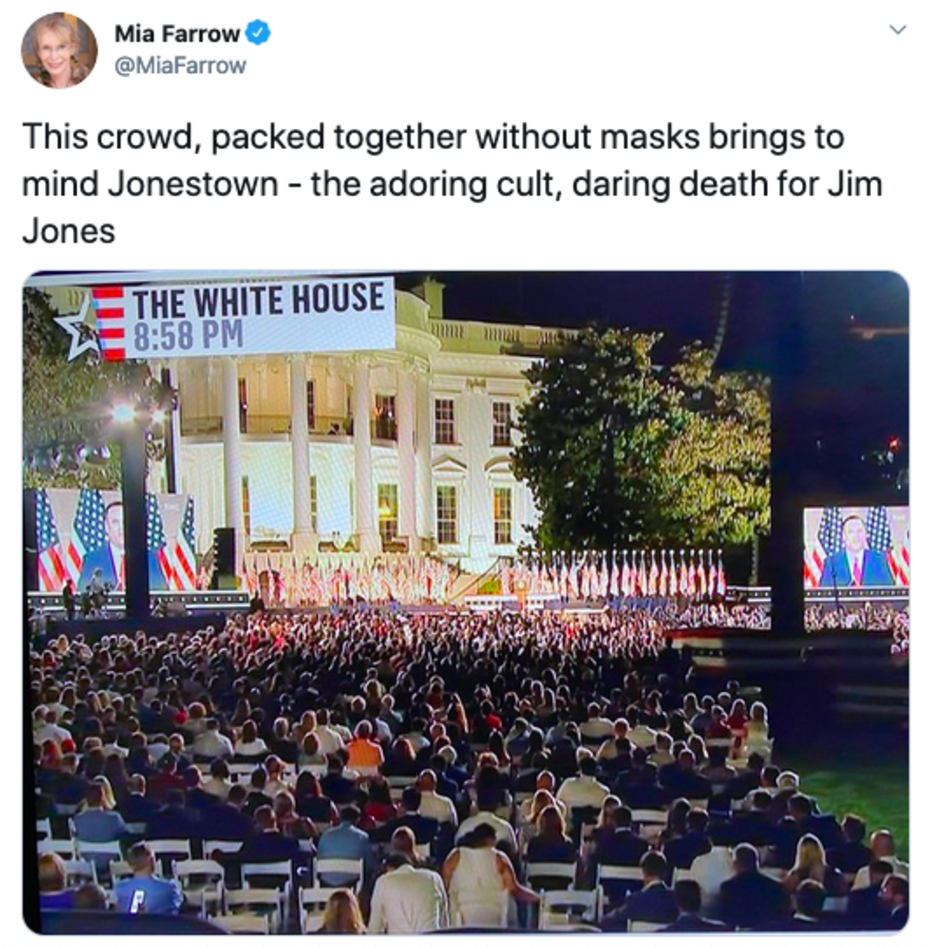 Not to be outdone, John Cusack similarly ranted, “Trump lies = death. Deathhkkkult trump is Jim Jones” and in a bizarre ramble tweeted, “Ivanka Trump standing in front of a whore -house of entrenched money & greed - Talking about elites - seriously Um - you mean the crowd of ‘ good Germans ‘ illegally on the lawn more of White House ? Putrid –”

He ominously warned, “The next step into into the fascism is mass violence People are either for democracy or for fascism - in this late hour -Finally - it’s black and white - US or him - Fuck all of His enablers - every fucking one.”

Well, then! I’ll say one thing for Hollywood, at least they never hide how they really feel!