When President Trump talked about one of the earliest premature babies ever to survive and then tied it in with late-term abortion at Tuesday's State of the Union, pro-abortion activists were aghast. There was little Ellie Schneider, born at 21 weeks and 6 days, when other unborn babies are brutally butchered in the womb, and our president had the guts to say it.

President: Our goal should be to ensure that every baby has the best chance to thrive and grow just like Ellie. That is why I'm asking congress to provide an additional $50 million to fund neonatal research for America's youngest patients. That is why I'm also calling upon members of congress here tonight to pass legislation finally banning the late-term abortion of babies. Whether we are Republican, Democrat, or independent, surely, we must all agree that every human life is a sacred gift from God...

Needless to say, there was much weeping and gnashing of teeth from the left. The LA TImes called it "beyond the pale outrageous." Refinery 29 said it was “a dangerous comparison” and continued, “The fact that promoting medical research for premature babies was used to demonize abortion in this speech poses a serious threat to women’s health care, when in reality, these two circumstances are unrelated.” Meanwhile, Slate author Christina Cauterucci fumed, “Trump Used an Actual Toddler to Stoke Fear About Abortion at State of the Union.”

Cauterucci claimed, “Banning abortion wouldn’t do anything to help premature infants survive,” and mocked the idea that “advocates for reproductive rights don’t want premature infants to survive” but, in fact, preventing premature infants from being killed in the womb literally helps them survive and abortion advocates have repeatedly voted against ensuring babies are given life-saving care in the case of a botched abortion.

I’d like to introduce Cauterucci to Gov. Ralph Northam (D-VA) who, in talking about late term abortions, described how “the infant would be delivered… and then a discussion would ensue” and abortionist Dr. Kermit Gosnell who snipped the necks of premature infants to kill them. Of course, working in a liberal bubble like Slate, she probably hasn’t even heard of what these men said and did. 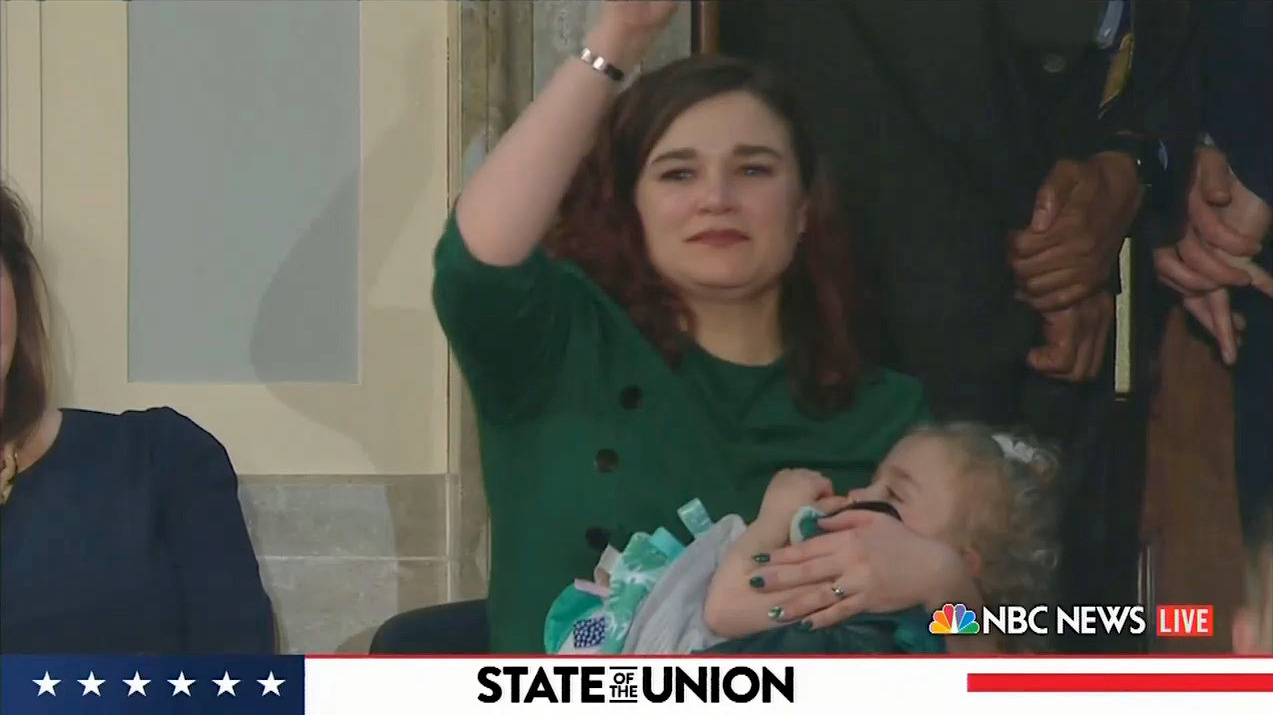 She also claimed, “By using the tale of a surely terrifying premature birth to stoke fear about abortions later in pregnancy—which are often performed under heartbreaking circumstances—Trump pointedly discounted one major part of both stories: the lives and desires of the women involved.” Except Trump didn’t discount the woman involved, Robin Schneider, Ellie’s mother, he introduced her. Obviously it was Robin’s desire that her premature baby live and she even visibly put her hand in the air (see photo, right) to signify agreement with Trump tying premature births to late term abortions.

“No one wants to give birth at 22 weeks,” Cauterucci continued. “When a baby is born that early, it’s more often a tragedy than a miracle; most of those infants do not survive. Premature childbirth is a bout of misfortune. Abortion, by contrast, is a choice.” That’s why it’s such a horrific choice, actively choosing to kill your child at the point of viability, when other parents are praying for their child’s survival. It was a powerful juxtaposition that President Trump employed and Slate’s response was weak.

Cauterucci fixated on how “Trump and the pro-lifers who love him often equate fetuses with toddlers in an attempt to portray abortion as murder.” The point wasn’t that Ellie is a toddler – she could have been born a week ago or been an adult – the point was that she is the one of the most premature surviving human beings and every day our medical technology and science advances to move that viability line earlier and earlier, pushing it deeper and deeper into the second trimester.