From ‘Bigly’ to ‘WikiLeaks,’ CMAs Work in Politics Without Being Too Political 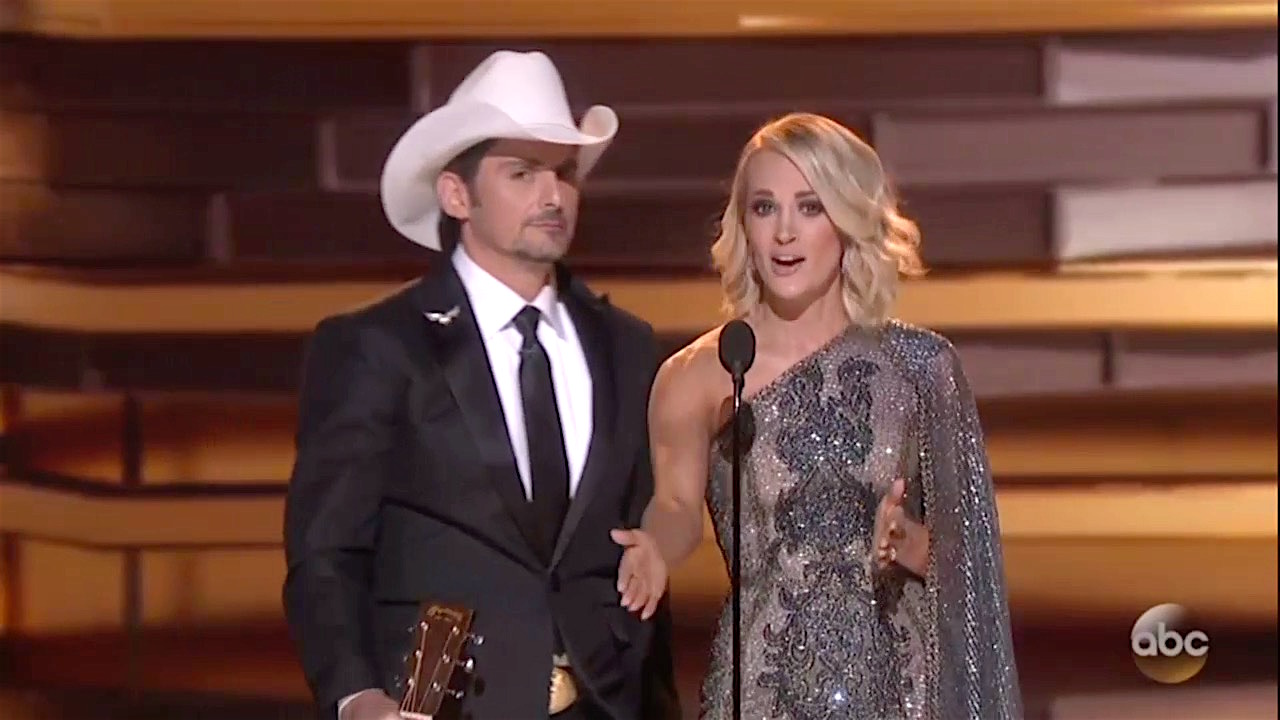 There was just one skit at the beginning that had Brad playing the part of Trump by using all of his lines. Then Carrie brought out a “basket of deplorables.” Yeah, it was as awkwardly forced as it sounds.

Carrie: We're joined by all of this year's nominees for entertainer of the year. Like our buddy, Keith Urban. [ Cheers and applause ]
Brad: Wrong.
Carrie: Also nominated, Luke Bryan and Chris Stapleton. [ Cheers and applause ]
Brad: Lies! Crooked Carrie.
Carrie: Crooked Carrie? And Mr. Yearwood, Garth Brooks.
Brad: That's true. But one more nominee for entertainer of the year. I've been standing next to this wonderful person for a long time now. I love all you guys, but #I'mwithcarrie. [ Cheers and applause ] But what I think doesn't really matter, because this show is rigged. [ Laughter ] Bigly.
Carrie: No, no, it's not, Brad. But the people need to know, will you accept tonight's results?
Brad: Yes. If I win.
Carrie: You're not even nominated!
Brad: Then no. And you're a nasty woman.
Carrie: Okay. Enough already. So much has happened in the news since we last met. Brad and Angelina broke up.
Brad: Yeah, we did. And I don't want to talk about it.
Carrie: Well, I have just the thing to cheer you up. We're all getting stuff! Tonight for our big anniversary party, you're all going home with a special gift basket. Your very own basket of deplorables!
Brad: Wow.
Carrie: Whoo!
Brad: Look at all those deplorables.
Carrie: We have camo, ammo, Miranda, it's your favorite caliber.
Brad: Beer goggles. Luke Bryan, you're going to get a lot of use out of these. Here's something tasty. Willie Nelson's potted meat.
Carrie: Have you ever tried this stuff.
Brad: Yeah, I tried it once in college. You all know the jingle.
Both: ♪♪ You'll forget your troubles every time you eat Willie Nelson's pot-ted meats ♪♪
Brad: I have the munchies now.
Carrie: You can wash your meat down with this, girl crush hard soda.
Brad: Nice. And it comes in new, refreshing Florida Georgia lime.
Carrie: Do not drink that during the show, because you're going to have to take a wiki leak.

The only other possibly political moment came when Beyoncé made a surprise appearance with the Dixie Chicks to sing her country-ish song “Daddy Lessons,” which is about growing up in Texas, guns and mentions the Second Amendment – even though Beyoncé is pro-gun control.

For a celebrity awards show, though, it was extremely bland politically, which was refreshing. Wouldn't it be nice if the rest of Hollywood would just "shut up and sing," too?