Music Blog Calls 'Am I The Only One' Singer a 'Middle Class, Right Wing Wanker'; Record Label Responds 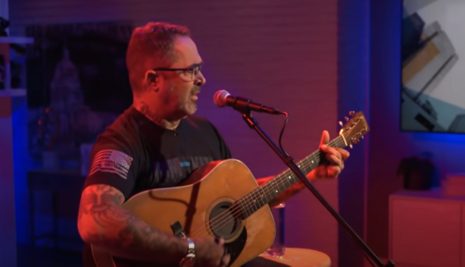 Aaron Lewis’s new country song “Am I the Only One” quickly rose to the top of Billboard’s Hot Country Songs list because of its pro-American lyrics and strong criticism at the left. The song’s popularity angered a lot of cry-baby leftists and they are now targeting the founder of Big Machine Label group for promoting Lewis.

Music blogger Bob Lefsetz wrote a blog about Lewis's song last week and called out Big Machine founder Scott Borchetta for “marketing this junk.” He also referred to the lyrics as “heinous” and wrote that

This middle class, right wing wanker has recorded a song that should have been played at CPAC, in between speeches by nitwits like Lauren Boebert saying to refuse the ‘Fauci ouchie’.

Lefsetz continued his attacks by claiming that “no one” is listening to the song. The song has 2 million hits on Youtube and 2.7 million streams on Spotify. Weird for a song no one is listening to.

Borchetta released a response to the post and noted that his job is not to tell his artists “what to sing and write about.” He further noted that his label group also represented left-wing Sheryl Crow and when she released her song “Woman in The White House.”

"Aaron Lewis and I have political disagreements. But there are also things we agree on. I think that’s the foundation for the idea of our country," Borchetta continued. "It doesn’t work if we’re so divided that we can’t reach across the aisle, have a conversation or an argument, and ultimately, shake hands. If we can’t do that, and this moment is so divisive, we may never get our country back."

The growing number of downloads for the song shows a sense of connection between the lyrics and the way that many Americans feel. But leftists hate that right-wing beliefs could ever be popular and the fact that we all have the right to free speech.

The Big Machine founder also called Lefsetz out on this, “To just ‘cancel’ (drop) Aaron is ridiculous and I’m disappointed that you would even suggest such a thing,” he wrote.

You don’t have to agree or acknowledge, but Aaron’s message is speaking to millions of people. Let it be a wake up call to reps and dems alike – be loud and be heard! It woke you up. It inspired you to make a statement. It worked. And it’s working. It’s inspiring conversation.

Lewis’s song is only a few weeks old and has already gained massive amounts of attention. Thankfully Borchetta actually has some guts and won’t bend his knee to the mob that wants to cancel all things conservative. The people running our government could learn a thing or two from him.