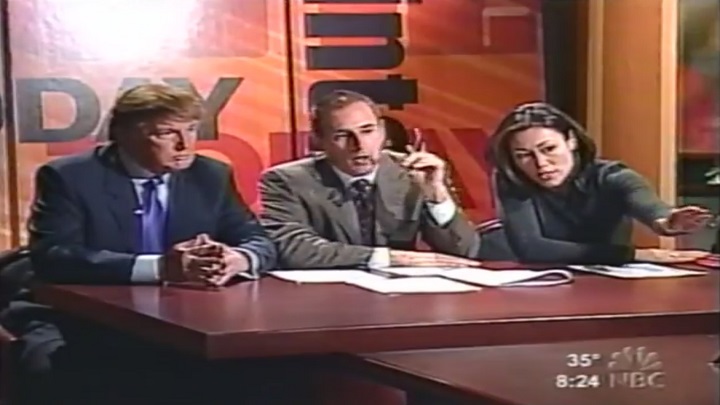 "There's really not that much of a correlation between one and the other," Greenblatt said in reference to Trump’s appearance on television and his success as a presidential candidate.

The Associated Press reported on Aug. 2, that Greenblatt was “surprised” Trump wanted to run for president. But he added that Trump had “been a prominent figure for so many years, it's probably not surprising that he would embark on this kind of journey."

Other NBC employees, however, saw a much stronger link between Trump’s rise as a candidate and his celebrity at the network. According to Paul Telegdy, the president of NBC’s Alternative and Reality Group, Trump would not have become the Republican nominee without The Apprentice. Former Tonight Show producer Dave Berg even called Trump’s many late night television appearances a “dry run” for a presidential campaign.

Variety reported on May 24, that Telegdy said The Apprentice “created a phenomenon television personality,” and emphasized the media’s culpability in creating a public persona.

“What’s going on demonstrates, if nothing else, the enormous amount of responsibility that goes with the job of putting out the version of someone that we do in a TV show,” Telegdy said.

Starting in 2004, NBC’s Today show acted as a de facto PR outlet for The Donald and gave regular interviews to him and his Apprentice contestants. Today’s promotion of Trump was apparently so intense that Trump himself remarked on April 15, 2004, “I feel we’re sort of here a lot,” before one of his interviews on the show.

NBC imprinted a mythic persona of Trump onto its broadcasts by hyping his business success, and at times, describing him with messianic language.

Access Hollywood anchor Billy Bush exalted Trump as a potential political figure, describing him as “the next president of the United States” on Election Day in 2004.

Tonight Show host Jay Leno also jokingly introduced Trump as “the next president of the United States,” in 1999, according to former Tonight Show producer Dave Berg.

“I realize I had it backward,” Berg wrote. “Trump wasn’t posing as a presidential candidate to boost his Nielsen ratings. He was actually making a campaign dry run under the guise of being a celebrity.”