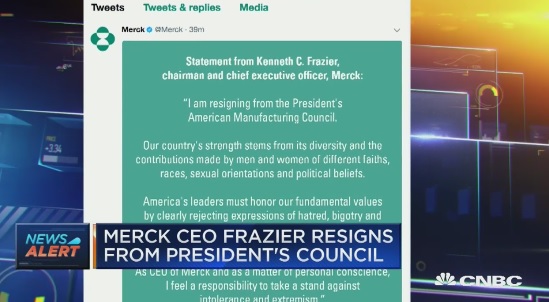 The media don’t just make the news, they frame it. Journalists did it this week, pushing business CEOs to quit President Donald Trump’s American Manufacturing Council. After one CEO resigned in response to Trump’s comments on the violence in Charlottesville, Virginia, the media urged others to follow. The fallout resulted in Trump shutting down the group entirely.

Merck CEO Ken Frazier decided to leave the council after Trump’s comments on violence between white supremacists and counter protesters which included Antifa. Antifa are “anti-fascists” who show up to protest hateful speech and shut it down and have demonstrated willingness to use violence to accomplish those goals, according to CNN.

There were at least seven times liberal journalists and media outlets chose to apply pressure on business leaders themselves. From journalism teachers, to business news anchors and columnists; liberal media activism was on full display. New York Times columnist Andrew Ross Sorkin asked if other executives would take “a stand,” while a Los Angeles Times columnist called out those still “kissing up” to Trump and others tried to shame CEOs on Twitter.

“America’s leaders must honor our fundamental values by clearly rejecting expressions of hatred, bigotry and group supremacy, which run counter to the American ideal that all people are created equal,” Frazier wrote in part of his resignation announcement.

Frazier’s decision quickly led to media activists pressuring other CEOs to quit Trump administration advisory councils too. As of Aug. 16, seven had quit including Kevin Plank of Under Armour, Brian Krzanich of Intel, Scott Paul of the Alliance for American Manufacturing, Richard Trumka of the AFL-CIO union, Inge Thulin of 3M and Denise Morrison of Campbell Soup.

However, Trump preempted continued pressure on those leaders and resignations with a tweet of his own the afternoon of Aug. 16, “Rather than putting pressure on the business people of the Manufacturing Council & Strategy & Policy Forum, I am ending both. Thank you all!”

1. Andrew Ross Sorkin: ‘Merck’s Leader Took a Stand. What About the Other C.E.O.s?’ 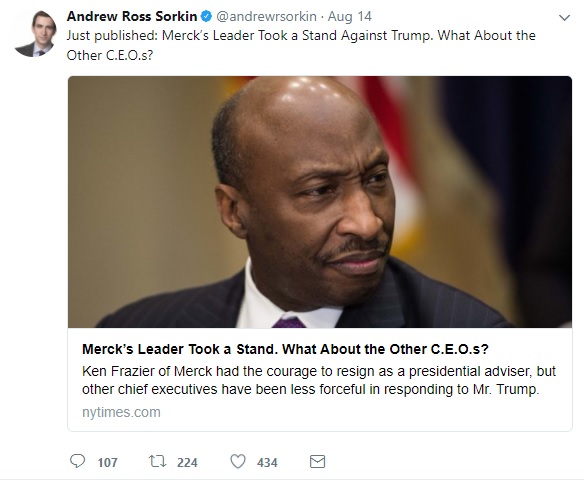 One prominent business journalist who prodded others to leave the manufacturing council was Andrew Ross Sorkin, the founder of Dealbook at The New York Times and a CNBC co-anchor. The Dealbook headline read, “Merck’s Leader Took a Stand. What about the Other C.E.O.s?”

Later it was toned down to “Outraged in Private, Many C.E.O.s Fear the Wrath of the President."

Sorkin wrote on Aug. 14, “At what point do the C.E.O.s of the largest companies in the United States tell President Trump that enough is enough? Not yet, apparently.”

Sorkin called the silence from other CEOs “remarkably conspicuous” and asked “how can so many other American business leaders and senior executives remain quiet about the president’s reaction? Where is the moral courage to stand up?”

After examining some reasons why and talking to several executives Sorkin concluded his argument essentially calling them chicken if they don’t challenge Trump: “While C.E.O.s may call out the hate, will they have the fortitude to call out the president?”

Although it appears Business Insider changed the headline after the fact to something less direct, an Aug. 15, story still appeared in Google searches and listings with the headline “CEOs should quit Trump’s manufacturing Council.”

The headline became “The CEOs on Trump’s councils are all playing themselves” by senior finance correspondent Linette Lopez.

Lopez still told the CEOs “Stop playing yourselves. Now is the time. In the past 72 hours, Trump has proved not only that he doesn’t care about the values of the American workplace, but also that he doesn’t respect your opinion about what those values should be.”

She told them to “Save the ‘But I’m helping him’ excuses for someone else,” and that if they’re there to persuade Trump to move against their rivals “It’s not worth it.” She warned them that whatever they get from Trump will not last but “photos of you looking like a sycophant wasting your shareholders’ employees’ and customers’ time” will.

3. LA Times Columnist: Blasts CEOs ‘Still Kissing Up’ to Trump After Asking Why Any Stayed

Los Angeles Times columnist Michael Hiltzik so badly wanted CEOs to abandon the manufacturing council he’d already written two columns about it by Aug. 15. The first, published Aug. 14, was headlined, “The question isn’t why Merck’s boss quite Trump’s CEO council; it’s why any other CEOs are staying.”

“Frazier’s action raised a number of questions, but one stands paramount: Why haven’t the other members of Trump’s jobs council followed his example,” Hiltzik wrote.

Notice he didn’t claim it begs the question what will the others do, but why haven’t they.

“Retaining membership in Trump’s business councils makes a company complicit in everything he represents: his punitive immigration policies, his climate change denialism, and now his embrace of white supremacist and Nazi sentiments,” Hiltzik railed. “ ... The day will come when American corporations will be asked what they did to fight back — not merely what they said. Until the companies still on Trump’s business councils abandon him, the answer will be: ‘We did nothing.’”

The very next day he had another column, “Pressure points? Here are the companies whose CEOs are still kissing up to Trump.”

It was Hiltzik and other liberal media were applying the pressure. 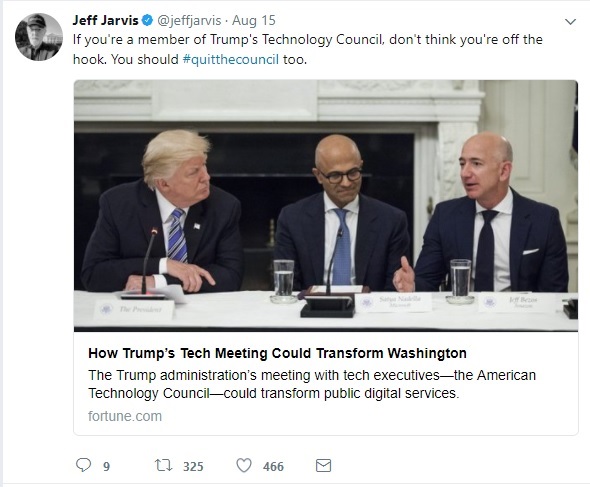 Jeff Jarvis is a journalism professor and well-known media voice, and he also openly included the hashtag #resist in his Twitter bio. So his Twitter activism will shock no one.

Like many lefties, Jarvis insisted executives were morally culpable if they didn’t resign. He tweeted on Aug. 14, “Everyone with any conscience having any role with this man should be resigning today. Anything less is complicity.”

Eventually his guilt trip turned into direct attempts to pressure company leaders, even tagging the founder of Grab Your Wallet and others to join forces and force executives to dump Trump’s advisory groups.

“I’m thinking Campbell’s Soup isn’t so mmm-mmm good after all. You?” Jarvis said in one tweet.

On Aug. 15, he Tweeted to @MichaelDell “I wish you’d quit Trump’s manufacturing council. For a greater good.”

“It you’re a member of Trump’s Technology Council, don’t think you’re off the hook. You should #quitthecouncil too,” he warned. He also called on “union folk” to tell the AFL-CIO to leave the council.

Twitter is the breeding ground for attacks and a place many journalists drop the facade of objectivity. That was certainly the case in recent days.

Chicago Sun-Times Deputy Managing Editor for news and sports Chris De Luca tweeted, “I'll say it again: What does it say about the CEOs — and their companies — who stay on Trump's jobs council? He had tweeted the same question on Aug. 14.

De Luca works for a paper which editorialized “Donald Trump, America’s bigot in chief” on Aug. 16. An editorial he also tweeted out.

He also retweeted Crooked Media founder Jon Favreau’s tweet at GE, Boeing, Walmart, Pepsi and others saying “This is who your company’s associated with” and a link to the liberal New York Times story which said “Trump gives white supremacists and unequivocal boost.”

Syndicated columnist for The Washington Post columnist Vivek Wadhwa also criticized executives for staying on advisory councils tweeting, "This was a test for other CEOs as well as for Trump--and tthey all failed. [sic]"

6. Larry Summers’ Blog at Financial Times: How Can CEOs ‘Face Their Children’?

Economist and former Obama administration Treasury Secretary Larry Summers isn’t a journalist, but he does have a media platform at Financial Times and is often interviewed by cable channels like CNBC.

He criticized the “abdication of moral responsibility on the part of business figures who have lent their reputations to Donald Trump,” congratulated Frazier for his decision and commended Sorkin of The New York Times for asking the same question.

“No advisor committed to the bipartisan American traditions of government can possibly believe he or she is being effective at this point. And all should feel ashamed for complicity in Mr. Trump’s words and deeds. I sometimes wonder how they face their children.”

Upon Plank’s resignation he added, “I applaud this decision, and hope that many other chiefs will follow suit.”

7. Slate’s Daniel Gross: CEOs ‘Running Out of Reasons Not to Bail on Trump’

Newsweek and Daily Beast editor and Slate contributor Daniel Gross wrote about the “conundrum” facing executives which “have to be careful not to publicly side with someone who is openly antagonistic to their modus operandi” but must also recognize the government’s ability to impact them through policy.

“CEOs are running out of reasons not to bail on Trump,” Gross’s headline declared.

Although the article itself didn’t strongly advocate CEOs abandon Trump, Gross said Frazier’s move puts them all in a “tough spot” and will face questions about “why they remain on the council now that its only black member has resigned.”

Gross also promoted Summers’ column arguing for all CEOs to quit the councils and applied it to the larger Trump administration. One of his tweets on Aug. 15, said, This is the question that should be posted daily to Cohn, Mnuchin, Wilbur Ross: how do you face your kids?”