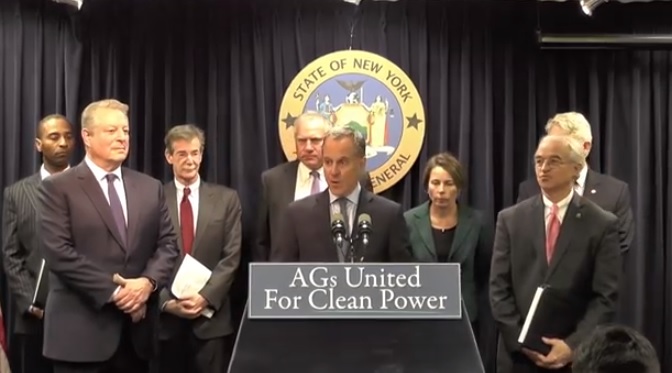 Galileo, the famous Italian astronomer and scientist, once said, “In questions of science, the authority of a thousand is not worth the humble reasoning of a single individual.”

Tell that to the UN IPCC and the news media. Presumably, Galileo would find the use of the so-called “scientific consensus” on global warming as the basis to call for prosecution of dissenters unsettling. Everyone should find it downright chilling.

The liberal media certainly haven’t. Even as multiple attorney’s general have been accused of “colluding” with green activists in an attempt to prosecute ExxonMobil, four national newspapers have barely mentioned any of the ethical problems with the attack on Exxon — from the unethical journalism, the left-wing philanthropists funding groups responsible for much of that journalism, to the secret meetings of attorneys general and environmental activists.

Particularly unsettling is the way a group of state Attorneys General appear to have been coordinating and meeting with green activists to come up with a plan to attack ExxonMobil and accuse the company of fraud or racketeering over climate change. The media have mostly reported on the investigation of Exxon, without challenging the ethics or the funding behind this concerted effort to demonize the oil company — in spite of its current view that climate change is a threat.

“It’s ironic — what they’re accusing us of is exactly what they’re doing themselves, which is trying to manipulate public opinion behind the scenes,” Exxon spokesman Alan Jeffers said, according to Politico.

The Los Angeles Times (and the Columbia University journalism fellows) crowed about how their hit pieces published in October 2015 against ExxonMobil spurred on calls for a criminal investigation. InsideClimateNews also published similar anti-Exxon stories. Green activists have run with these claims, starting an anti-Exxon campaign #ExxonKnew.

“A number of current and former U.S. senators and representatives, including Hillary Clinton, Bernie Sanders and Al Gore, have called for a criminal investigation into Exxon Mobil, based on those press reports,” the LA Times wrote Nov. 5.

The LA Times noted that New York State Attorney General Eric Schneiderman’s investigation was publicly announced after its reporting on the oil giant. Reporting it had done in partnership with Columbia University’s Energy and Environmental Reporting fellows, part of Columbia’s school of journalism.

Schneiderman claims he’s looking into whether the company “misled the public and its shareholders” about the risks of climate change.

Since November 2015, the NY AG’s office has worked hard to get other state AGs to join his fight and they held a joint press conference on March 29, featuring Al Gore and others. They called themselves AGs United for Clean Power. But there were other meetings held the same day; private meetings between the state AGs and environmental activists who have been pushing for legal action against fossil fuel companies for many years.

Emails obtained by the Energy & Environment Legal Institute showed several attorneys general planned to meet together to discuss potential litigation against Exxon, and a meeting agenda for March 29 that included presentations from environmental lawyer Matt Pawa and Union of Concerned Scientists’ Peter Frumhoff — both have argued for prosecution of the fossil fuel industry in the past. In 2007, Union of Concerned Scientists accused Exxon of financing a “disinformation campaign ... to deceive the public” on climate.

A March 30, email showed Pawa asking “What should I say if she asks if I attended?” following an inquiry from a Wall Street Journal reporter. Lem Srolovic of the New York State Attorney General’s office replied to Pawa: “My ask is if you speak to the reporter, to not confirm that you attended or otherwise discuss the event.”

Outs of dozens of news reports, editorials and op-eds about the investigation of Exxon in The New York Times, Los Angeles Times, Washington Post and USA Today in the past six months, just three articles or editorials mentioned “free speech” or a “chilling” effect. Those exceptions came in a Post column by Robert Samuelson and two NY Times articles about the investigation which found legal experts that thought Exxon’s actions would probably fall within free speech rights guaranteed by the First Amendment. Samuelson worried about the free speech implications of the attempt to litigate.

So far those papers have not covered criticism of the attorneys general gathering together and with environmental activists, as alleged on April 15 by the Energy & Environment Legal Institute based on emails they obtained through open records requests.

However, the New York Post editorial board reacted saying, “the anti-Exxon campaign is starting to look like a conspiracy in its own right — pursuing a purely political vendetta in a blatant abuse of office.” But the Post was one of very few media outlets making that argument.

The Wall Street Journal also reported that a “key meeting” in January included green activists Kenny Bruno, Bill McKibben and an agenda for the meeting included the goal “to establish in the public’s mind that Exxon is a corrupt institution that has pushed humanity (and all of creation) toward climate chaos and grave harm.”

There is a common link between the people and groups currently trying to expose or prosecute ExxonMobil: specific liberal donors including George Soros.

Both InsideClimateNews and the Columbia University reporting project that sought to expose Exxon were also both funded by the Rockefeller Family Fund and Rockefeller Brothers Fund, according to reports from CJR and Reuters.

On Oct. 9, 2015, The Los Angeles Times published a “special report” called “What Exxon Knew about the Earth’s Melting Arctic.” That initial story in a series was written by Sara Jerving, Katie Jennings, Masako Melissa Hirsch and Susanne Rust after a year of research by the Energy and Environmental Reporting Project (EERP) at Columbia University’s Graduate School of Journalism partnering with the LA Times.

When the story was first posted, it did not include any information about which groups have donated to the EERP — a list that includes Soros’ Open Society and both the Rockefeller funds among others.

Between the 2006 and 2014 election years, Schneiderman also received $185,500 in direct political donations from the Soros family. $54,500 came directly from Soros.

InsideClimateNews has additional connections to Soros too. Richard Tofel, who currently serves on the advisory board for InsideClimate, has been the president of liberal Soros-funded ProPublica for three years.

Soros is also connected to InsideClimateNews through David Sassoon, its founder, who received his masters from the Columbia Journalism School. Soros has given $9.7 million to Columbia’s School of Journalism.

Another liberal group, The Rockefeller Family Fund, also gave money specifically to InsideClimateNews to expose the fossil fuel industry, according to Reuters.

“Rockefeller Family Fund Director Lee Wasserman said Exxon was not singled out when it granted about $25,000 to InsideClimate News,” Reuters reported.

"We supported public interest journalism to better understand how the fossil fuel industry was dealing with the reality of climate science internally and publicly," Wasserman said. "No specific company was targeted in our push to drive better public understanding and better climate policy."

The Los Angeles Times’ articles, which were instigated and written by Columbia University journalism fellows, were backed by many of the same liberal donors and initially the newspaper failed to include any sort of disclosure about funding for the project.

The ethics were troubling enough that Columbia Journalism Review slapped the paper and the students on the wrist and opined about this new “gray area” of nonprofit journalism.

“[T]he Columbia Energy and Environmental Reporting Project is funded in part by a group of philanthropic organizations, at least one with a clear advocacy bent on the issue. The names of the funders were not listed on the two articles when they were published by the Los Angeles Times, though they were later added online,” CJR admitted.

Rockefeller Brothers Fund, a group ironically opposed to fossil fuels, also funded InsideClimateNews. The Rockefeller Brothers Fund announced it would start divesting from fossil fuels in September 2014, according to The New York Times. CNN reported the intention was to completely divest from fossil fuels by the end of 2017. The fund also spend years on “efforts to get it [Exxon Mobil] to moderate its stance on issues pertaining to the environment and climate change.”

Of course, Columbia School of Journalism Dean Steve Coll defended the project and reporting of the fellows. Coll (and The Los Angeles Times) claimed those groups were “hands-off” funders whose money hadn’t tainted the research.

But Coll himself had both an agenda, and his own ties to Soros money. Before becoming the journalism school dean, Coll was the head of the New America Foundation, a progressive public policy organization that has received $4.2 million from Soros since 2000.

He also wrote the book Private Empire critical of ExxonMobil in 2012, before becoming the dean of the journalism school. And one of the journalism fellows told the Diane Rehm Show that this project was unfinished business for Coll.

Susanne Rust told the talk show host, “There were things suggested to him that ExxonMobil may have known not only a lot about climate change in the 1980s and late 1970s, but may have actually incorporated climate change into their business operations.”

For its part, The Los Angeles Times was a perfect fit for the series of hit jobs against the oil and gas giant since it had already chosen sides in the climate debate.

The Los Angeles Times  publicly chose bias and censorship years ago by declaring in 2013 it would no longer publish letters from climate change “deniers.” After declaring that bias, is there any reason to think its coverage of a fossil fuel company would be fair or without an agenda?