The Supreme Court dealt a “major blow” to the Obama administration and the president’s climate agenda late on Feb. 9. NBC, the “Green is Universal” network ignored it entirely. CBS and ABC gave the ruling short shrift.

The Hill reported the high court blocked the “landmark climate rule for power plants” which would have assigned states drastic carbon dioxide reduction rules based on what energy sources they utilize. Liberal Slate called the ruling “an ominous sign.” 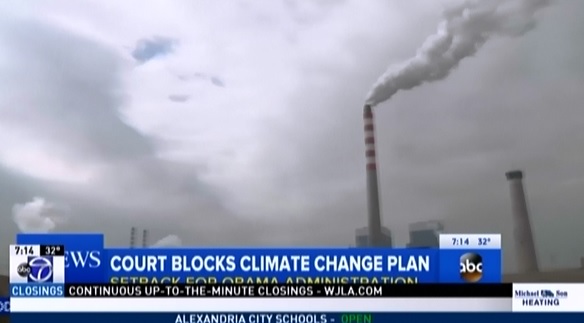 The “Clean Power Plan” rule, is a centerpiece of Obama’s climate agenda. The Supreme Court’s stay prevents the EPA from enforcing the rule until lawsuits brought by more than 20 states, and a number of companies and organizations are over.

“It’s a stunning development,” Jody Freeman, a Harvard law professor and former environmental legal counsel to the Obama administration, said in an email to The New York Times. She also told the Times “the order certainly indicates a high degree of initial judicial skepticism from five justices on the court.” During the recent Paris climate negotiations, Obama had used the power plant rule as evidence the U.S. would take action.

In spite of the significance of the decision, NBC failed to mentioned it at all during its Feb. 9, evening broadcast, or on Today the following morning. ABC and CBS paid little attention devoting less than one minute of coverage (56 seconds) combined on Evening News, This Morning and Good Morning America to the “setback for President Obama” regarding the “sweeping” regulations.

Although they were not quoted in any of the three network mentions, skeptics of global warming alarmism celebrated the decision. Climate Depot’s Marc Morano called it a “major victory for U.S. sovereignty, energy freedom, climate science and a blow to economic central planning.”

“Halting — even temporarily — the EPA regulations means we no longer have to listen to Obama officials claiming the rules — which would not even impact global CO2 levels — would somehow lessen extreme storms,” Morano said.

“We are thrilled that the Supreme Court realized the rule’s immediate impact and froze its implementation, protecting workers and saving countless dollars as our fight against its legality continues,” Attorney General of West Virginia Patrick Morrisey said, according to the Times. Morrisey led the 29-state legal challenge.

The rule would have forced hundreds of coal-fired power plants to shut down.

The American Energy Alliance President Thomas Pyle also issued a statement calling the court decision “ a strong rebuke of the Obama administration’s heavy-handed regulatory agenda. The Supreme Court should be applauded for standing up for American families after the D.C. Circuit failed to do so.”