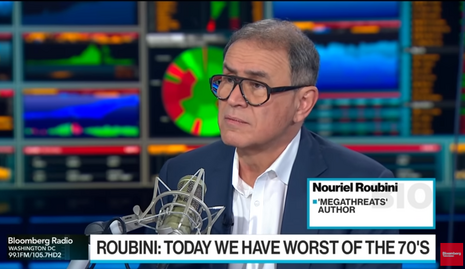 The Soros-funded Project Syndicate released a Dec. 2 column by New York University Professor Emeritus of Economics Nouriel Roubini headlined: “The Unavoidable Crash.” Roubini wrote that years of frivolous fiscal, monetary and credit policies compounded by major negative supply shocks have significantly damaged the world economy, including the U.S.: “Stagflationary pressures are now putting the squeeze on a massive mountain of public- and private-sector debt.” Roubini didn’t mince words. “The mother of all economic crises looms, and there will be little that policymakers can do about it,” he wrote. Soros’ Open Society Foundations funneled at least $1,532,105 into Project Syndicate between 2018 and 2020. [Emphasis added.]

Project Syndicate claims to be active in 158 countries, work with 508 media outlets and publish in 66 different languages.

Specifically, the inflation-rattled world economy is facing a trifecta of “economic, financial, and debt crises, following the explosion of deficits, borrowing, and leverage in recent decades,” according to Roubini. Regarding explicit debts, Roubini noted “the figures are staggering.” In the U.S., total private- and public-sector debt is “420%, which is higher than during the Great Depression and after World War II.” The state of the economy is so precarious according to Roubini that the potential forthcoming crash is projected to be worse than 2008:

Unlike in the 2008 financial crisis and the early months of COVID-19, simply bailing out private and public agents with loose macro policies would pour more gasoline on the inflationary fire.

Roubini noted that the spike in “unsustainable debt” ratios imply that borrowers were insolvent “‘zombies’ that were being propped up by low interest rates (which kept their debt-servicing costs manageable).” These borrowers include households, corporations, banks, shadow banks, governments, and even entire countries, Roubini wrote. However, sky-high inflation “– fed by the same ultra-loose fiscal, monetary, and credit policies – has ended this financial Dawn of the Dead.”

The economist concluded that the world is teetering on the verge of a stagflation crisis that could potentially eclipse the economic turmoil of the 1970s:

[T]hese developments are coinciding with the return of stagflation (high inflation alongside weak growth). The last time advanced economies experienced such conditions was in the 1970s. But at least back then, debt ratios were very low. Today, we are facing the worst aspects of the 1970s (stagflationary shocks) alongside the worst aspects of the global financial crisis. And this time, we cannot simply cut interest rates to stimulate demand.