The White House attempted to gaslight Americans by casting confusion over the meaning of a recession. But did it take its cues from a major publication funded by liberal billionaire George Soros? 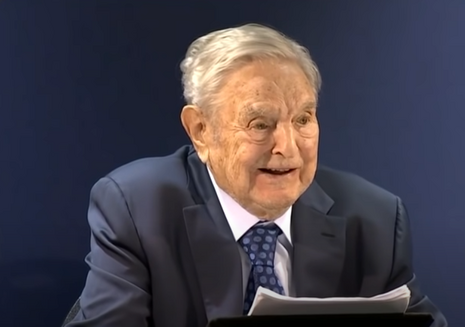 The White House Council of Economic Advisers (CEA) released propaganda July 21: “It is unlikely that the decline in GDP in the first quarter of this year—even if followed by another GDP decline in the second quarter—indicates a recession.”

Three days earlier, major liberal global publication Project Syndicate released a column by Jeffrey Frankel, a Harvard economist and research associate of the National Bureau of Economic Research, which bloviated the same talking points: “[E]ven if the [Bureau of Economic Analysis] estimate is negative, however, it does not necessarily mean that the US has entered a recession.”

Frankel even went so far as to suggest that “contrary to popular belief, first-quarter growth was not necessarily negative,” even though first-quarter GDP growth contracted 1.6 percent. The BEA is set to release second-quarter GDP numbers July 28.

Soros’ Open Society Foundations funneled at least $1,532,105 into the spin-doctor Project Syndicate just between 2018 and 2020 alone. Project Syndicate boasts about its so-called “unparalleled” global reach. It notes that it is currently active in 156 countries, works with 508 media outlets and has had its commentaries appear in 66 languages. In 2021, Project Syndicate distributed 1,385 columns and was published a total “of 20,393 times around the world.”

Like Project Syndicate, Frankel also has ties to Soros. His Harvard profile boasts that he presented at the annual conference of Soros’s Institute for New Economic Thinking in 2011. Frankel also just happened to be a co-contributor with Soros for the 2003 book Economic and Financial Crises in Emerging Market Economies, which was released by — oh look at that — the NBER. Strangely enough, Frankel and the CEA split hairs in their blogs by arguing the U.S. economy isn’t technically in a recession until the NBER that Frankel works for says so.

Their arguments were clearly engineered to trivialize the “practical definition of recession,” which is defined by two quarters of negative GDP growth.

Feels like we were all pretty clear on what recessions were before the Biden admin started trying to redefine them. Remember back in 2019 when CNN's John Harwood said even one really bad quarter of GDP contraction was enough to count?pic.twitter.com/mLfJ9RF4Of

Frankel spun that it is the Business Cycle Dating Committee of his NBER that “makes [the official recession] call, based on a variety of indicators – a role that the BEA officially recognizes.” The CEA, along similar lines, touted the NBER's Business Cycle Dating Committee as “the official recession scorekeeper.” But as The John Locke Foundation pointed out in a July 25 blog post, the NBER is, regularly, “incredibly slow in making [the recession] distinction.” The NBER announced the 2008 recession about a full year after it had started in January 2008, the blog noted.