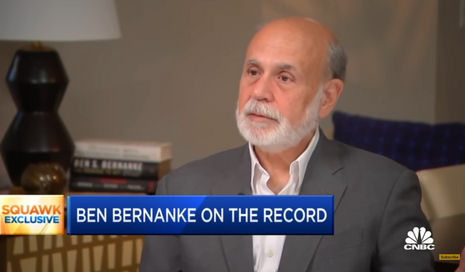 Ben Bernanke penned a ludicrous op-ed for The New York Times headlined: “Inflation Isn’t Going to Bring Back the 1970s,” after news broke that inflation skyrocketed to a 40-year high of 8.6 percent year-over-year in May. His main argument had the audacity to varnish the so-called expertise of political leaders and the Fed.  “[T]oday’s monetary policymakers understand that as we wait for supply constraints to ease, which they will eventually, the Fed can help reduce inflation by slowing growth in demand.” Bernanke tried to make it seem like Big Government learned its lesson from the terrible policies that caused the 1970s crisis: “In short, the lessons learned from America’s Great Inflation, by both the Fed and political leaders, make a repeat of that experience highly unlikely.”

In short, reading Bernanke’s column was like reading a White House press release.

But Bernanke appeared to contradict himself. He reportedly warned “that the nation is headed for a situation, much like the 1970s, where Americans were losing their jobs but still facing higher prices at the grocery store and at the pump.” Now, in his latest write-up, Bernanke did a 180-degree turn. “Are we in danger of repeating that [1970s] experience?” he wrote. “The short answer: almost certainly not.” Talk about an about-face. [Emphasis added.]

Bernanke fawned how “[t]he Fed today recognizes that it must take the leading role in controlling inflation, and it has the tools and sufficient political independence to do so.” That’s strange coming from the same person who reportedly admitted the Fed made a “mistake,” to say the least, in its failure to address rising inflation as the threat it was.

Current Chairman Jerome Powell’s leadership has tainted the Fed by painting the inflation crisis under Biden as simply “transitory.” But in Bernanke’s bizarre view, “Drawing on the lessons of the past, [the Fed] also understand[s] that by doing what is needed to get inflation under control, they can help the economy and the job market avoid much more serious instability in the future.” So, what exactly have they been doing so far, Bernanke?

But this is the same Bernanke who repeatedly cast doubt on the warnings surrounding the 2000s housing bubble that eventually led to the 2008 financial crisis. Below is a video montage of Bernanke’s dismissals of the tea leaves spelling economic doom. In one 2005 case, Bernanke railed against the idea of a housing bubble potentially bursting and causing a recession: “I guess I don't buy your premise. It's a pretty unlikely possibility.”

Bloomberg News just reported on the current inflation woes gripping America that the Fed’s “bid to contain the hottest inflation in decades will end in a recession. That’s the message the bond market is telegraphing.” [Emphasis added].

Bloomberg News also tweeted recently that Powell “probably has to push the economy into recession in order to regain control of prices.” Powell is reportedly set to hike interest rates by a massive 75 basis points, further elevating recession fears.

Fed Chair Jerome Powell is facing an increasingly grim calculus: He probably has to push the economy into recession in order to regain control of prices https://t.co/PrJD1qBrXt

Conservatives are under attack. Contact The New York Times at 1-800-698-4637 and demand it report the truth on the Bidenflation crisis.