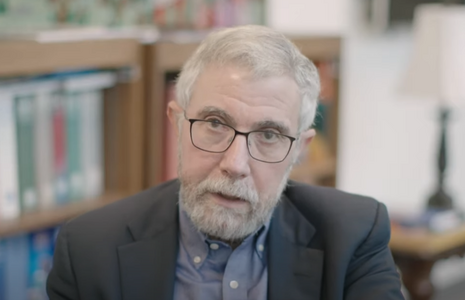 Krugman’s latest drivel harrumphed that “[v]oters don’t care about economists’ estimates of underlying inflation.” Instead, mourned Krugman, “they care about the prices they pay, especially the prices of highly salient goods they buy on a regular basis.”

Krugman pivoted off of a bad European inflation report to lecture Americans that the “lesson” was that “these are precisely the prices over which President Biden, or actually any president, has almost no control.”

When Biden used a similar line of reasoning to dodge responsibility for inflation in March, even The Associated Press fact-checked him: “Biden sidesteps reality. Government spending has been a clear factor behind rising consumer prices.”

A Rasmussen Reports survey in March revealed that "64% of Likely U.S. Voters believe the policies of Biden’s administration have increased inflation." [Emphasis added.]

Looks like the economist who admitted he was “wrong” on inflation is hopelessly content burying his head in the sand on the issue. Krugman even undercut himself later in his column by admitting that Biden and company did bear some of the blame: “Does this mean that Biden and U.S. policymakers bear no responsibility for inflation? No.”

According to Krugman, “This underlying inflation probably reflects an economy that’s running unsustainably hot, which in turn partly reflects an overlarge fiscal package at the start of Biden’s presidency and the Fed’s failure (which I shared) to recognize the problem early enough.” That’s quite an about-face from the same Krugman who once said about Biden’s gargantuan $1.9-trillion stimulus package that “Biden needs to go big and ignore the worriers.” [Emphasis added.]

Krugman even pointed out that gas prices under Biden “have more than doubled,” but proceeded to play the role of a hapless Biden lackey by excusing him of any responsibility:

In any case, as I already suggested, voters aren’t poised to punish Democrats for underlying inflation; they’re angry about gasoline and food prices, which no rational analysis would say are Biden’s fault.

But American Enterprise Institute resident scholar Benjamin Zycher punctured that narrative by explaining that Biden’s war against fossil fuels contributed to reduced output and higher prices. “Look no further than the Biden administration’s policies for the answer” as to why gas prices are increasing, Zycher wrote in an op-ed for National Review. “The ‘net-zero’ crusade against fossil fuels is an obvious attempt to force a sharp decline in current and future production.”

Krugman’s op-ed was so ridiculous that it even sported a factual error in its beginning paragraph. He originally stated that, “On Monday, Eurostat, the European statistical agency, released a preliminary estimate of euro area inflation for March.” His column was later slapped with a “correction” because the Eurostat report he used to defend Biden was actually for May, not March.

Conservatives are under attack. Contact The New York Times at 1-800-698-4637 and demand it distance itself from Krugman’s pro-Biden spin on inflation.