New York Times economist Paul Krugman appears to have finally admitted defeat on the issue of inflation, adding another notch to his belt of being consistently wrong on economic issues. 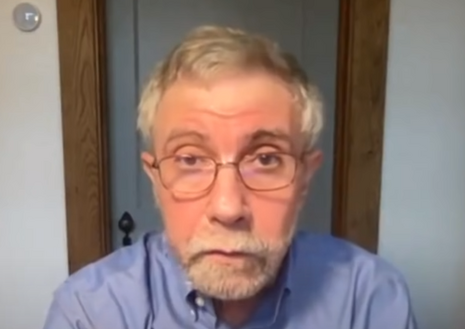 In a shocking tweet, Krugman conceded: “I got inflation wrong; I didn't see the current surge coming. But why? I didn't think the fiscal stimulus early this year would boost demand as much as [economist Larry Summers] et al predicted.”

But in a desperate attempt of self-exaltation, Krugman still tried to hedge his concession by saying demand hasn’t boosted as much as Summers had been warning about. “[I]n fact, so far it hasn't,” he said, as if that was any consolation to him being wrong. He claimed, “Real final demand (excluding inventories) is up 2.6% over the past two years. That's well short of normal growth in potential output.”

However, he tried to use a chart of Gross Domestic Product to support his argument. As Manhattan Institute Adjunct Fellow Noah Williams pointed out: “Surprised [Krugman] can identify demand by looking at a graph of GDP.” Poor Krugman. He just got through writing a pitiful op-ed Nov. 11, pleading to readers: “History Says Don’t Panic About Inflation.”

Trying to clarify my own thoughts on inflation. I got inflation wrong; I didn't see the current surge coming. But why? I didn't think the fiscal stimulus early this year would boost demand as much as Summers et al predicted ... and, in fact, so far it hasn't 1/

Krugman placed the blame for again missing the mark on “supply-chain issues in meeting huge demand for durable goods and withdrawal of workers from the labor force, i.e. Great Resignation.” However, Krugman didn’t pinpoint the root cause of these problems. The Wall Street Journal suggested two specific sources for what has been causing the worker shortage in particular. The sources it mentioned were: “government and employer vaccine mandates that set ultimatums for workers” and Democratic Party policies making “quitting an easier economic option” through a litany of federal unemployment benefits. So much for Krugman’s premature celebration in July of so-called “Morning in Joe Biden’s America.”

Surprised he can identify demand by looking at a graph of GDP https://t.co/QBUsGGkuFE

In addition, The Journal editorial board noted how President Joe Biden and the Federal Reserve “squeezed the supply side with incentives not to work, restrictive mandates, and the promise of more regulation and higher taxes. The result is 5% inflation and supply-chain disruptions that CEOs say will stretch well into 2022 and maybe beyond.” Krugman seems hell-bent on protecting his “very strong” case for “Bidenomics.” He recently tried to insulate Biden by embarrassingly claiming the president had “no control” over the spike in gas prices.

Krugman did suggest that his hedging “doesn't say that the inflation will necessarily be transitory, although I think that's still the best bet. But it is important to realize that the story is more complicated than excessive stimulus.” Even his quasi-admission that inflation may or may not be “transitory” is still quite a hedge from his Sept. 10 op-ed, in which he stated definitively in his headline: “Wonking Out: I’m Still on Team Transitory.”

Take the “L” and move on, Krugman.