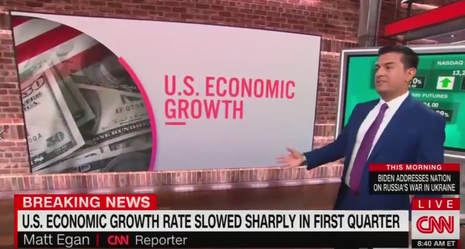 CNN’s Matt Egan spun himself into a whirlpool of insanity trying to downplay bad economic growth.

The Bureau of Economic Analysis (BEA) reported that Gross Domestic Product contracted 1.4 percent in Q1, which was the complete opposite of economists who estimated a 1 percent increase, a 2.4 percentage point miss. U.S. GDP taking a nosedive was worsened by the 40-year-high inflation currently plaguing the economy and drilling holes in Americans’ wallets.

Janney Chief Fixed Income Strategist Guy LeBas summed up the significance of the GDP falling into the negative against expectations of growth: “Nasty miss.” Egan tried to minimize the political damage on the April 28 edition of CNN’s New Day: “We shouldn’t panic about these numbers.”

Egan, who was mocked last year for saying Biden wasn’t responsible for high gas prices, dismissed the contraction:“During COVID, we’ve had a lot of weird economic numbers and we just got another one.” The chyron for the segment was extremely misleading: “U.S. Economic Growth Rate Slowed Sharply in First Quarter.”

That’s an interesting way of glossing over the fact that negative growth isn’t really growth at all. “We shouldn’t panic about these numbers because the weakness has been driven by some quirky components here,” Egan propagandized. He blamed everything from “Omicron,” to a “lapsing in some of the pandemic assistance,” and to “the trade deficit” for the horrible GDP numbers, rather than Biden’s policies. So the economy contracted in part because the government turned the free money spigots off?

Aside from the stupidity of blaming “Omicron” for lackluster growth, the “trade deficit” argument is misleading in and of itself.

EconoFact noted in 2017 that blaming slower GDP growth on the trade deficit is misguided:

Not only is the idea that trade deficits cause slow growth wrong in theory, it is also wrong in practice. While the U.S. economy experienced strong growth between 2002 and 2005, the trade deficit went further in the red: from a little over -4% of GDP to close to -6% of GDP (see chart). In contrast the trade deficit shrank sharply during the darkest days of the Great Recession from 2008 to 2009 (the period between the orange and brown lines).

But Egan was desperate to reassure that all was well in Biden’s paradise. He urged viewers to look at the GDP contraction through another lens. “The real driver of the economy is consumer spending, and that actually grew — 2.7 percent pace,” he said. “That is solid. It’s actually a fast pace than the final three months of last year. That is a good sign.”

Egan continued his spin by making it seem like the contraction should only be viewed in hindsight. “This is a rear-view-looking number,” Egan said. “This was stuff that happened a few months ago. Uh, the market, economists, the Fed — they’re all focused on what’s happening in the spring and the summer —  how the economy is also holding up with inflation and also these Fed rate hikes.”

As I've been warning Q1 #GDP just revealed a U.S. economy that's half way to an official recession.

As I've been warning Q1 #GDP just revealed a U.S. economy that's half way to an official recession. Q1 GDP was negative 1.4% verses expectations of a 1.1% rise. If the economy is this week with interest rates this low the next few rate hikes will push the economy into #recession!

Conservatives are under attack. Contact CNN at (404) 827-1500 and demand the outlet tell the truth about the shaky state of the economy..