New York Times economist Paul Krugman must be a glutton for punishment. He’s gone from spending months downplaying the surging inflation threat, to admitting he was wrong on inflation, to now dismissing it altogether as a crisis. 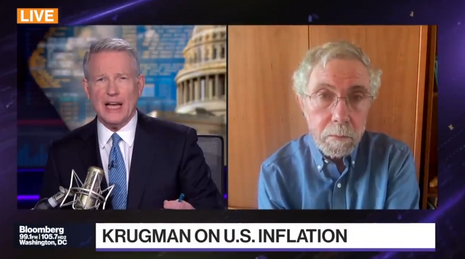 Krugman appeared on the Feb. 11 edition of Bloomberg TV’s Balance of Power to discuss how the Federal Reserve shouldn’t use “shock therapy” when it comes to finally raising interest rates from zero. After conceding that there was “underlying overheating” in the economy that demands the Fed consistently raise rates to fight off inflation, Krugman then spiraled into spewing utter nonsense: “It’s not a crisis.”

That’s an asinine way to characterize inflation hitting the highest level in 40 years (7.5 percent). But Krugman didn’t stop there: “I don’t see any sign yet that inflation has gotten entrenched in the economy.”

This is the same Krugman who admitted Nov. 14 that he “got inflation wrong” after selling the false “Team Transitory” narrative for months. National Review senior political correspondent Jim Geraghty documented at least six times throughout 2021 where Krugman tried to downplay or dismiss the threat of spiking inflation. Now, Krugman’s new tactic appears to be attempting to redefine the word “transitory.” “[B]oth investors and consumers, and presumably people actually setting wages and prices, um, currently believe in what — uh — some people are calling ‘elongated transitory.’” “Elongated transitory” is an oxymoron, Krugman.

Krugman babbled as he tried to explain the contradictory notion of “elongated transitory”: “That is, they think inflation will remain elevated for a fairly long time through a lot of this year but not beyond that.”  The CEO of the “world’s largest sovereign wealth fund,” —  Nicolai Tangen — recently told The Financial Times that he expected the spiking inflation ransacking economies on a global scale (including the U.S.) to be “permanent.” Tangen reportedly emphasized his adamant position on the matter: “[I’m] the team leader for team permanent.”

Krugman conceded in December that “warnings about inflation have proved right, while Team Transitory’s predictions that inflation would quickly fade have been wrong.” But the consistently wrong Times economist can’t stop trying to find some backdoor method to resurrect a seemingly dead “transitory” inflation argument that has not panned out, which is ironic given that he’s the author of the anti-capitalism book “Arguing with Zombies.”

Conservatives are under attack. Contact The New York Times at 1 (800) 698-4637 and demand it distance itself from Krugman’s economic nonsense.