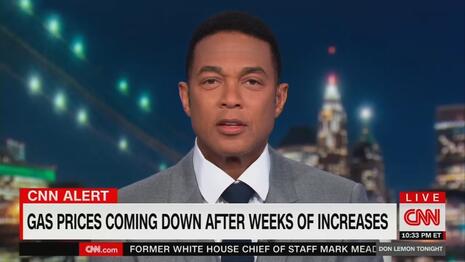 CNN has gone above and beyond the call of propaganda to spin economic coverage to benefit President Joe Biden’s White House and a new poll it released shows that effort has floundered.

CNN’s new poll of registered voters found that Americans gift-wrapped Biden with the “lowest net economic rating of any president at this point through their first term since at least Jimmy Carter in 1977.” Fifty-five percent of voters disapprove of Biden in comparison to 44 percent who approve. The average of all polls taken in December has Biden at -13 points on the economy, according to CNN.  That's “18 points worse than” the “average president at this point in the last 44 years.”

Apparently, CNN’s efforts to change the game in Biden’s favor aren't working. CNN’s coverage of oil and gas prices shifted from 77 percent negative to 79 percent positive, according to a NewsBusters analysis of two weeks’ coverage. If that wasn’t bad enough, the network also referred to inflation spiking at the fastest rate in nearly 40 years (6.8 percent) as a “sign of a really strong economy.”

CNN’s efforts follow its own reporting from its December 6 Reliable Sources newsletter that the “The White House, not happy with the news media's coverage of the supply chain and economy, has been working behind the scenes trying to reshape coverage in its favor.”

Talk about an epic fail.

But CNN didn’t even need the White House to tell it to whitewash Biden’s economic failures. In fact, CNN already was doing that throughout his first year in office. In May, CNN published a story headlined: “The economy is finally booming, but millions of Americans can't feel it -- yet.”

The network tried to get in front of the December jobs report, which would show anemic growth against expectations. But in the hours before the Bureau of Labor Statistics report dropped at 8:30 a.m. Dec. 3, CNN celebrated that “[t]he US jobs recovery has picked up steam again in the final months of the year, bringing some good news in the face of persistently rising prices and a new Covid variant.”

It praised how economists polled by financial market data provider Refinitiv expected “another sizable jobs gain in Friday's November employment report — 550,000 positions.” But then reality hit: The BLS released its report hours later showing that the economy only added 210,000 jobs, 340,000 fewer than expected.

On Dec. 1, CNN had the gall to portray inflation as a blessing in a story headlined, “Why inflation can actually be good for everyday Americans and bad for rich people.” But that’s not all. In September, CNN reporter Matt Egan wrote a propaganda piece in an apparent attempt to protect Biden’s poor economic policies.

The Sept. 17 piece masqueraded as news, and donned the headline: “Forget inflation. This billionaire investor worries about democracy.” In other words, nothing to see here, folks! The story babbled how Carlyle Group co-founder David Rubenstein was “shrugging off fears of runaway inflation and concerns about looming tax hikes” because he was “far more worried these days about the state of American democracy.”

Conservatives are under attack. Contact CNN at (404) 827-1500 and demand it report fairly on the disastrous consequences Biden’s economic agenda has brought on the economy.