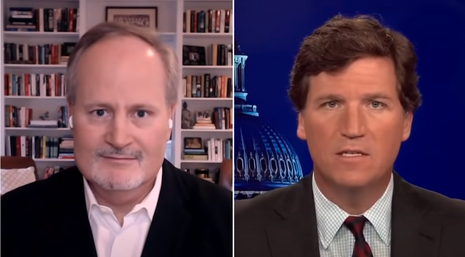 Timothy O’Brien’s anti-Carlson rant was headlined, “Fox News Thinks Tucker Carlson Is Still Good for Business.” O’Brien propagandized Anti-Defamation League (ADL) CEO Jonathan Greenblatt’s recent crusade to ask “advertisers gathered Tuesday for Global Marketer Week to press Fox Corp. to fire” Carlson. He then took a nosedive into absurd leftist bluster: “Carlson has been trafficking in white supremacist myths recently on Fox News and his broadcasts, Greenblatt said offer an ‘example of how hatred is being mainstreamed in America 2021.’” O’Brien didn’t let up with his nonsense and complained that Carlson was a “deft propagandist and performance artist who steeps himself and his audience in bigotry, racism and ‘cancel culture’ antics to keep the world at bay.”

It was brazenly hypocritical for O’Brien to accuse Carlson of being a “deft propagandist.” Bloomberg News announced in November 2019 that it would not investigate its owner Michael Bloomberg when he entered the 2020 presidential race. In fact, O’Brien took a leave of absence at Bloomberg Opinion to join Bloomberg’s campaign. O’Brien’s personal website biography made no mention of his involvement in the Bloomberg campaign.

Murdoch reportedly said Greenblatt “somehow misinterpreted Carlson’s advocacy for the voting rights of white people, and his invocation of the Great Replacement Theory, as bigotry,” according to O’Brien’s summarization. O’Brien then hyperlinked out to a flurry of liberal attack pieces on Carlson to rebut Murdoch. O’Brien specifically included a Rolling Stone piece that accused Carlson of using the language of — wait for it — “white supremacist murderers.” O’Brien wrote: “Aha. Carlson, however, has been taking deep dives into this sort of muck for some time. So has his network.”

It was also convenient that O’Brien ignored an April 15 report by The Hill showing that 1,500 rabbis signed a letter “supporting Tucker Carlson in response to the [ADL’s] demand to have the Fox News host fired.” The letter, sponsored by the Coalition for Jewish Values (CJV), condemned Greenblatt’s vendetta against Carlson:

‘The Coalition for Jewish Values, which represents over 1,500 traditional, observant rabbis in American public policy, is distressed by grossly misplaced charges of antisemitism made by your organization … Your recent attack on Tucker Carlson of Fox News, calling it ‘white supremacist’ to question whether particular policy choices enable illegal immigrants to nullify the votes of American citizens, is merely one example.'