Fox News host Tucker Carlson said his show was being targeted by groups funded by some of America’s most notorious liberal billionaires. 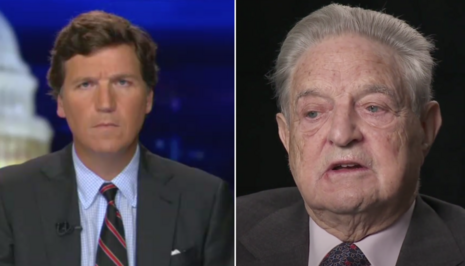 Carlson said that within the past 24 hours and recent weeks, “the call to take this show off the air by groups funded — for real — by the Ford Foundation or by George Soros, by Michael Bloomberg, by Jeff Bezos has become deafening.”

Carlson argued on Thursday's Tucker Carlson Tonight that this hornet’s nest of billionaire-backed groups was going after the show’s “advertisers” and the “companies that carry” its signal into viewers’ homes. Carlson asked his guest, Federalist co-founder Sean Davis, what the left’s censorship gambit was about. Davis summarized the threat through a chilling quote from George Orwell’s “1984”: “‘The Revolution will be complete when the language is perfect.’”

Davis explained that the left has shifted from an authoritarian bent to outright totalitarianism:

Carlson expressed his disbelief at the “cowardice and the complicity of the entire media class in all of this. At some point the revolution is going to end.” Carlson continued: “[T]he kids at Politico and The Daily Beast and CNN and NBC are going to be standing there, and someone’s going to ask them, you know, ‘Why didn’t you say something as they hurt people for saying what they thought was true?’ And what are they going to say, do you think?”

The answer Davis gave was short and to the point: “Oh, they’ll pretend it was somebody else’s fault. This is what they all do.”