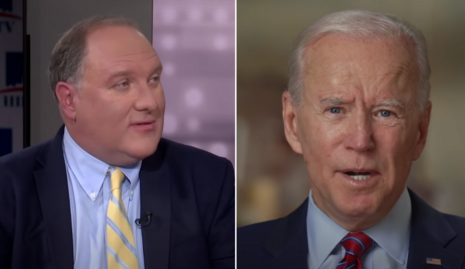 As Solomon put it, new financial disclosure reports with the Office of Government Ethics revealed that Biden “and his closest advisers personally fared extremely well during the Trump years, with some raking in millions each.”

Specifically, Biden himself “saw an historic rise in income and net worth, scoring at least $16.7 millions in income since Trump took office in 2017, or about three times what he and his wife Jill had made in the prior 20 years combined.” But that wasn’t all. Solomon also wrote that “[t]he former vice president also picked up a nifty second house, a beach estate in Rehoboth, Del., worth more than $2 million.” [Emphasis added.]

Biden had panned the Trump economy as having rewarded only “wealth over work,” according to Solomon. Solomon said Biden has repeatedly ripped the Trump economy along these lines, “even though before the pandemic [Trump’s economy] had achieved record-low unemployment, large job growth for minorities, a robust stock market, low interest rates and historic reductions in poverty.”

So much for that “Joe from Scranton” imagery that the media had peddled on Biden’s behalf throughout the election cycle.

But Solomon wasn’t finished, and proceeded to expose other members of Biden’s team for brazen hypocrisy. He pinpointed “Janet Yellen, the former Federal Reserve chair chosen [by Biden] to be Treasury Secretary.” Yellen had reported last week that “she collected more than $7 million in speaking fees alone in 2019 and 2020 from major financial firms such as Citi and Goldman Sachs and tech giants including Google.”

Solomon alluded that her amassed wealth could present potential conflicts of interest in her new role. He summarized:

[Yellen] had so much of Wall Street throwing her money that her proposed recusal statement identifying companies she will avoid entirely in policy decisions or that would require ethics waivers as Treasury boss runs five pages long.

Others caught in Solomon’s net included former Deputy Secretary of State Antony Blinken, Biden’s choice to be Secretary of State. Solomon reported that Blinken’s “consulting and business [after leaving the State Department in 2017] ranged from nearly $1.2 million in payments and between $1.75 million and $6.5 million in equity of distributions from his consulting firm called West Exec Advisors LLC.” In addition, “Blinken also reported taking out a mortgage for a home valued at between $1 million and $5 million in 2018 with a Trump-era interest rate of just 3.5 percent,” noted Solomon.

Lastly, Solomon named Biden pick for Director of National Intelligence Avril Haines. Haines disclosed that “she had seven separate sources of income over $5,000 each after leaving the Obama administration which landed her about $1 million since 2017,” according to Solomon. To put that into perspective, said Solomon, “the median household income in America reported by the Census Bureau in September was $65,712.”