It took Election Day being over for CNN to slam Democratic hypocrisy on the use of dark money.

CNN took aim at the Democrats in a November 27 story: “Democrats have denounced anonymous money in politics for years, but 2020 brought a tidal wave of it into the election to benefit their party.” In total, more than a jaw-dropping $320 million of “so-called ‘dark money’ helped boost Democrats in the White House and congressional races,” CNN noted. But here’s the kicker: the amount was “more than double the anonymous dollars that aided Republicans in this year's federal elections, a new analysis shows.” The George Soros-funded Sixteen Thirty Fund — a left-wing group CNN noted as responsible for about a third of the “dark money” that helped fuel Democratic candidates this cycle — had given $52 million to other “groups active in the 2020 elections.” CNN ignored mentioning that the group was connected to Soros. [Emphasis added.] 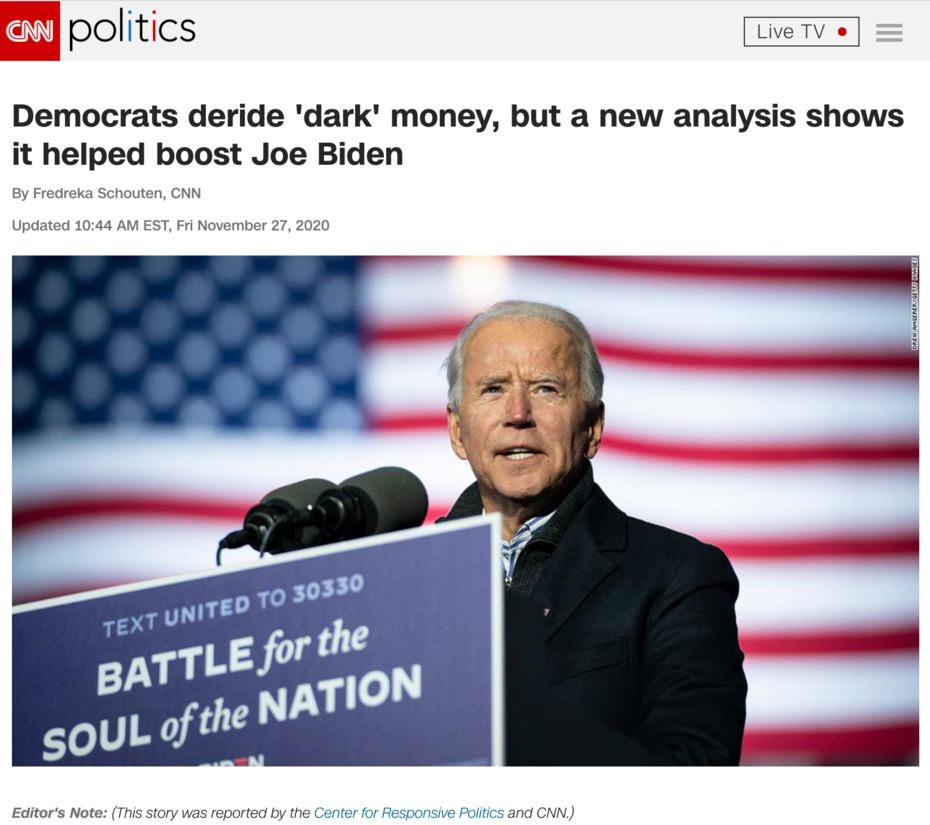 “In recent years, the Sixteen Thirty Fund has emerged as a hub for groups on the left, providing administrative, legal and accounting services for liberal projects,” CNN said. “Groups operating as arms of the Fund include [the Soros-funded] Demand Justice, which has opposed President Donald Trump's judicial nominees.” Demand Justice has also been funded by more than $2.5 million from the Soros group Open Society Policy Center between April and June 2018 alone, according to Influence Watch.

CNN summarized why this news is so significant:

The trend toward Democrats is a stark reversal from previous presidential election cycles in which dark money overwhelmingly boosted Republicans.

Apparently, the multimillion “dark money” operations are likely to be continuing well into the Georgia runoff races in January. The races will ultimately decide which party will be in control of the U.S. Senate. According to CNN,

The new figures come as candidates, political parties and outside groups, including those funded by nonprofits that conceal their donors — unleash a fresh wave of spending in Georgia to influence two US Senate runoffs that will determine which party controls the chamber. More than $287 million already had been booked on television ad buys in the state through Wednesday.

Conservatives are under attack. Contact CNN at 1-(404)-827-1500 and demand they report fairly on leftist dark money operations looking to influence the Georgia runoff races in January.