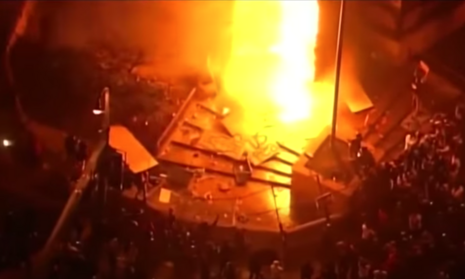 The Times admitted shockingly in a new report: “Some activists have downplayed the damage to businesses from looting and arson in racial justice protests around the country. But some small entrepreneurs are struggling.” The Times even cited Philadelphia Inquirer architecture critic Inga Saffron’s June 1 piece “Buildings Matter, Too,” where she wrote: “‘People over property’ is great as a rhetorical slogan. But as a practical matter, the destruction of downtown buildings in Philadelphia — and in Minneapolis, Los Angeles, and a dozen other American cities — is devastating for the future of cities.”

Even more revealing was a buried critique of the economic devastation the George Floyd “protests” had inflicted in the fourth paragraph: “Mr. Floyd’s death was the start of months of protests for racial justice led by the Black Lives Matter movement that have left long-term economic damage, especially in lower-income business districts.” [Emphasis added.]

Of course, this is a much different tune compared to what The Times was singing about the rioting in a July story headlined: “Peaceful Protesters With ‘Room for Rage’ Sympathize With Aggressive Tactics.” In that story, The Times characterized the violence in Portland, Oregon in pure propagandized fashion:

[T]he nightly assault on the federal courthouse has been part of a much wider peaceful resistance — high school students, military veterans, off-duty lawyers, lines of mothers who call themselves the 'Wall of Moms' — that began assembling nearly two months ago in the wake of George Floyd’s death at the hands of the Minneapolis police.

But, to be fair, The Times tech and internet culture reporter Nellie Bowles, who wrote the latest documentation of damage done to American businesses, has been a bit more forthcoming than her employer. This past year, Bowles had “managed to provide close-up pictures of the real-time, real-world consequences of the often violent, destructive, anti-American ‘protests’ taking place in Northwest U.S. cities.”

Bowles, in her latest piece, decided to give the apologists of the violence a hard dose of reality. Concerning the shooting of Jacob Blake, Bowles wrote:

It is unclear if the looters and rioters in this town [Kenosha, Wisconsin] — or the ones that tore through the commercial districts of Minneapolis, Los Angeles and Chicago — were genuinely committed to the Black Lives Matter movement or just taking advantage of a chaotic situation after the police shooting of Mr. Blake, which is now being investigated by the U.S. Department of Justice.

Focusing specifically on the city of Kenosha, Wisconsin, Bowles estimated that “more than 35 small businesses were completely destroyed.” She continued: “[A]round 80 [businesses] have been damaged, according to the city’s business association. Almost all are locally owned and many are underinsured or struggling to manage.” [Emphasis added.]

Bowles also took away a key talking point from leftists that what’s destroyed in property could be replaced:

Within the argument that looting is a minor issue is the assumption that property owners can easily replace what was lost. But many of the small businesses in Kenosha’s lower- and middle-income Uptown neighborhood will not receive enough in insurance proceeds to fully replace destroyed property. And many business owners across Kenosha describe the losses in more personal ways.

Conservatives are under attack. Contact The New York Times at 800-698-4637 and hold it to account for propagandizing on behalf of the Marxist riots.