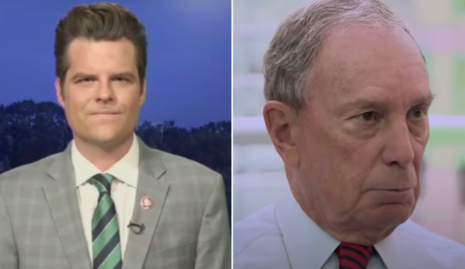 During the September 23 edition of Mornings with Maria on Fox Business, anchor Maria Bartiromo addressed Bloomberg raising $16 million in donations to pay the court fines and fees of Black and Hispanic convicted felons in Florida so they could vote in the November elections. Bartiromo told Gaetz, who also happens to be an attorney: “You’re calling for a probe into bribery for Michael Bloomberg to spend all that money in Florida alone. Tell us about it.”

Gaetz responded: “I’m the former criminal justice chairman of the Florida House of Representatives. I know this area of law well. I spoke to the Florida attorney general last night, and a criminal probe may already be underway in Florida.” He continued: “Chapter 104, Florida statute says that it is a felony for someone to either directly or indirectly offer something of value to impact whether or not someone votes.”

Watch the interview below:

Gaetz proceeded to lay out his case, and pointed to the existence of a Bloomberg memo, reported by the Washington Post, as evidence: “We have a confession document. The memo that the Bloomberg team used to go and get other people to contribute to this effort literally says: ‘We are doing this to impact whether or not these people vote.'”

The memo itself, cited by The Post, lends credence to that characterization: “‘We know to win Florida we will need to persuade, motivate and add new votes to the Biden column ... This means we need to explore all avenues for finding the needed votes when so many votes are already determined.'”

Gaetz also pointed out how the effort is “specifically targeting African Americans, because they believe in Florida, African Americans will vote 90 to 95 percent for Joe Biden.” The effort is also targeting convicted felons who are Hispanic. The Post said Bloomberg’s effort “focused only on Black and Hispanic voters who are already registered to vote and whose debts are less than $1,500.” This is a crucial bit of information. [Emphasis added.]

George Washington University Law Professor Jonathan Turley, who had disagreements on some elements of Gaetz’s interpretation of Florida law, conceded that “the racial exclusion of other votes and the [Bloomberg] memo could justify a criminal investigation shortly before the election.” [Emphasis added.]

Gaetz concluded that he believed the Florida attorney general “has jurisdiction and is currently evaluating options for a criminal investigation. One final point: We also have a RICO statute in Florida, so that this web of Bloomberg associated entities could all be brought under the same criminal prosecution.”

Recent reporting from Outkick shows that Bloomberg is not the only one doing this.  NBA star LeBron James, along with the Florida Rights Restoration Coalition, is also “offering to pay fines and fees so felons can vote in the upcoming presidential election (for Joe Biden),” Outkick reported.

Bartiromo expressed her unbelief at the $100 million Bloomberg pledged to spend to put Florida in the Biden column:

It’s pretty extraordinary that one person can spend 100 million dollars to get somebody elected. I mean, I think if that were on the Republican side, the Democrats would be going insane.

Conservatives are under attack. Contact Bloomberg News at letters@bloomberg.net and demand it distance itself away from its owner's leftist political activities.