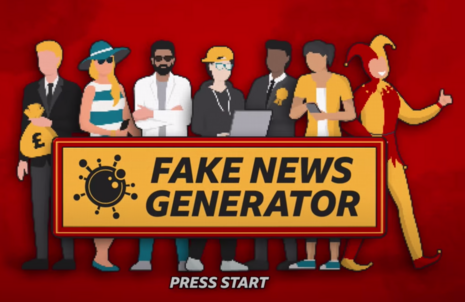 It turns out the news media can’t even report bad news without making it worse. Multiple outlets pushed a false statistic that U.S. GDP fell 32.9 percent in the second quarter.

Fact: It fell 9.5 percent. Not 32.9 percent. The 32.9 percent figure is more than three times higher than what actually happened. The 32.9% figure is the “annual rate” of decline in GDP. But just don’t expect that to be reported properly by CNN, some of the breaking news headlines, or journalists and news outlets firing off wild tweets on Twitter.

The “annual” rate was less than the reported “34.7” percent decline economists were expecting.

Addressing misreporting by CNBC specifically, former NewsBusters contributing editor Thomas Blumer broke down on Facebook how the idea that U.S. GDP contracted by more than one-third is fake news. He wrote: “Second-quarter GDP did NOT ‘plunge by 32.9 percent.’ The government's tables, excerpted below, tell us that annualized GDP fell from $19.0 trillion to $17.2 trillion. That's a very serious decline, but it works out to -9.5% (most analysts effectively expected 10% or more), NOT -32.9%.” 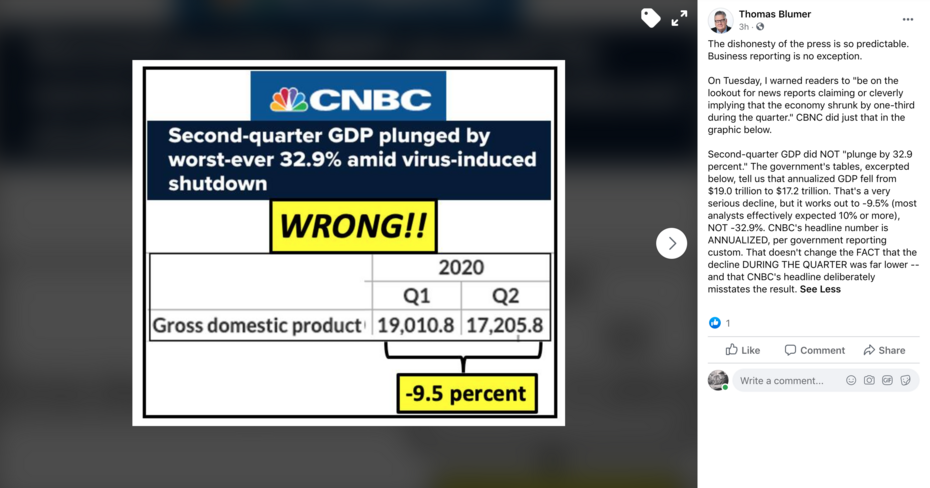 Other outlets and journalists were guilty of the same offense.

CNN Newsroom anchors Poppy Harlow and Jim Sciutto repeatedly ran a slide pushing fake news that GDP shrank 32.9 percent in the second quarter. That segment lasted for 264 seconds without any clarification that the figure represented the annualized rate. In fact, the factual 9.5 percent decrease wasn’t even mentioned in the segment.

CNN political correspondent Abby D. Phillip also pushed the fake news on Twitter. She tweeted: “BREAKING: America's economy just had its worst quarter on record. The US economy contracted by 32.9% between April and June, its worst drop on record, the Bureau of Economic Analysis said Thursday.” 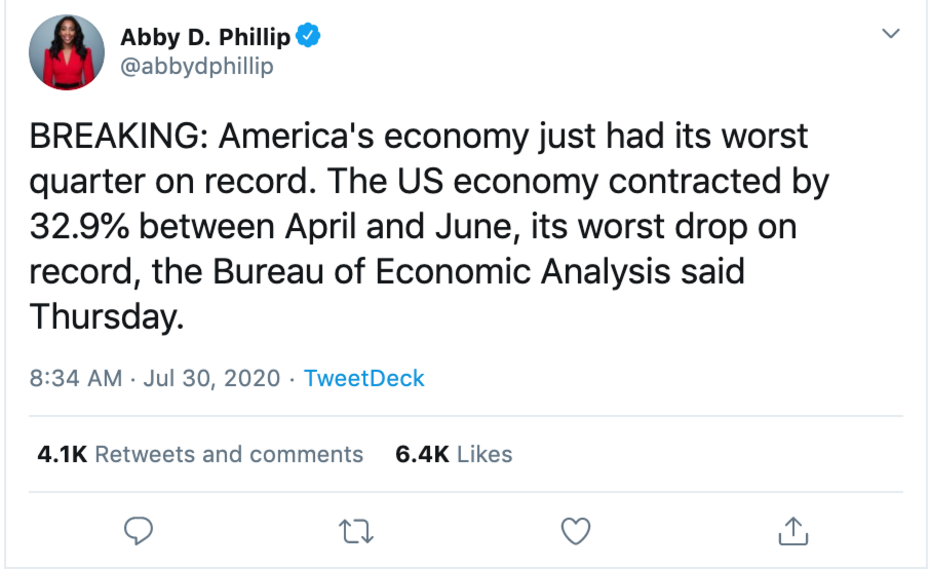 CNBC’s story on the news was headlined, “Second-quarter GDP plunged by worst-ever 32.9% amid virus-induced shutdown.” The first bullet-point reiterated the false statistic that “the U.S. economy suffered its worst period ever in the second quarter, with GDP falling a historic 32.9%.” It’s not until the second paragraph that CNBC gives the context that “[g]ross domestic product from April to June plunged 32.9% on an annualized basis.” [Emphasis added.]

Fortune magazine was guilty of the same act of journalist malfeasance in its reporting. The headline read, “U.S. GDP falls by a historic 32.9% as the pandemic ravages businesses and forces millions out of work.” [Emphasis added.] The Fortune report said “the U.S. Bureau of Economic Analysis announced that second quarter real GDP—from April to June—declined by 32.9% from the same period a year ago. It's the largest single quarterly decline on record for data going back to 1947 and represents more than $1 trillion in economic output wiped out by the coronavirus pandemic.”

This again is a misleading way of saying that the “32.9%” figure is the annualized rate without saying directly that it was the annualized rate. In fact, Fortune doesn’t even mention in its reporting that the actual GDP decline was 9.5 percent, and made it appear that the actual “quarterly decline” was 32.9 percent. The graph it uses for illustration is even headlined, “U.S. GDP falls by a historic 32.9% in the second quarter. 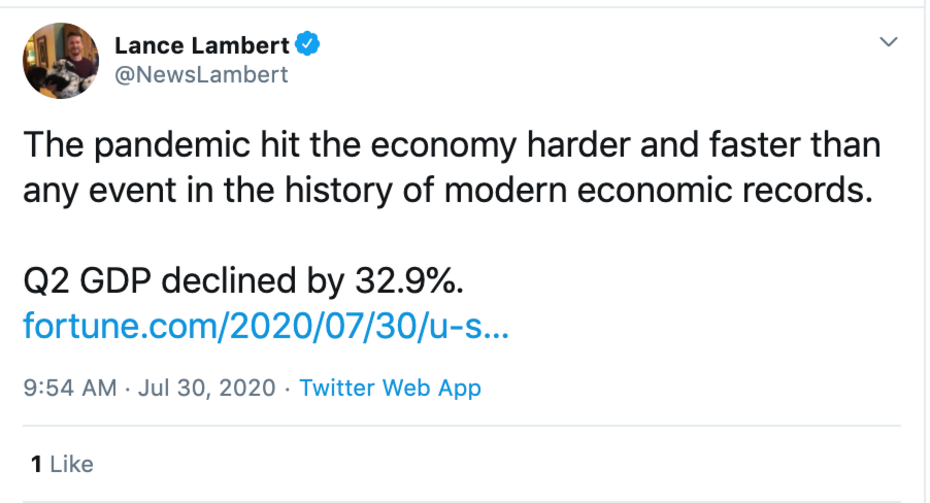 NBC News spread that false statistic on Twitter, saying “BREAKING: US GDP falls by a record 32.9% in 2nd quarter[.]” 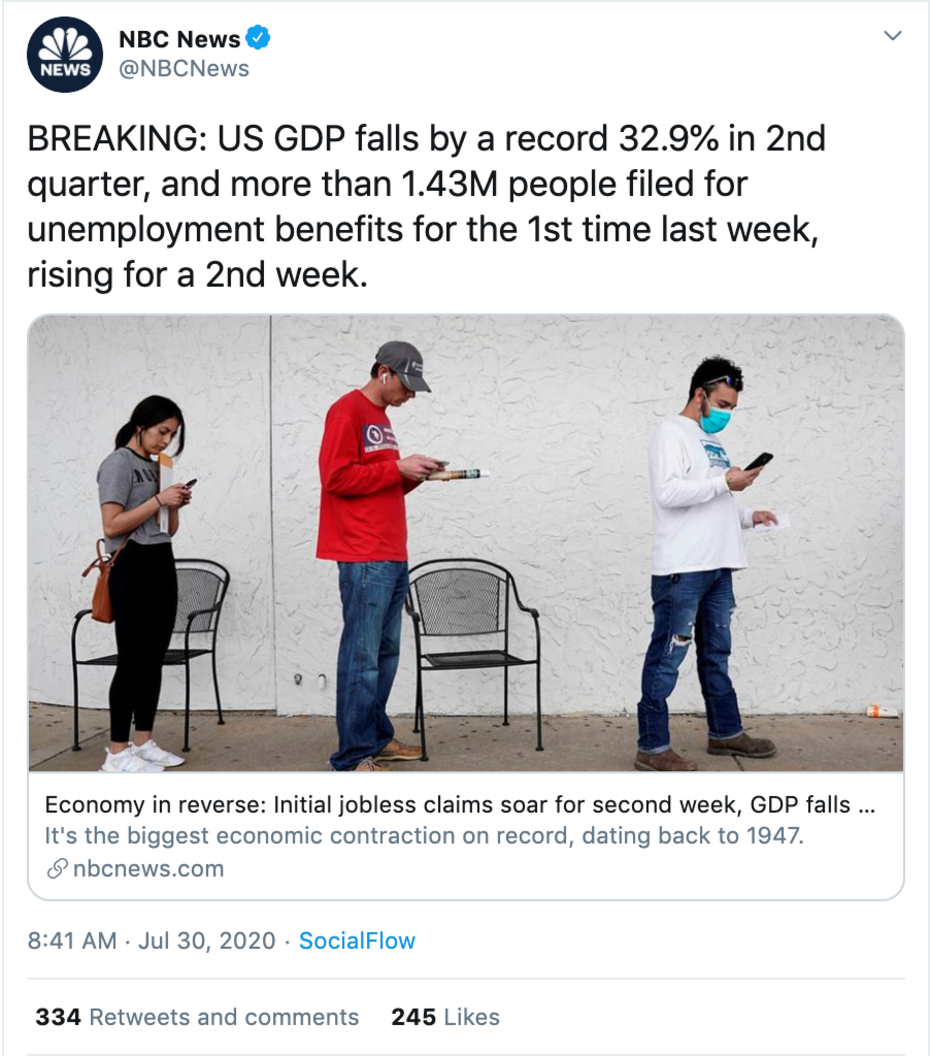 The NBC News headline on the report was just as misleading: “Economy in reverse: Initial jobless claims rise for second week, GDP falls by record 33 percent.” You wouldn’t know the “33 percent” figure was the “annualized” rate of decline until the second paragraph.

NBC News managing editor of politics Dafna Linzer thought she got in a zinger at President Donald Trump by pushing the same false statistic on Twitter. 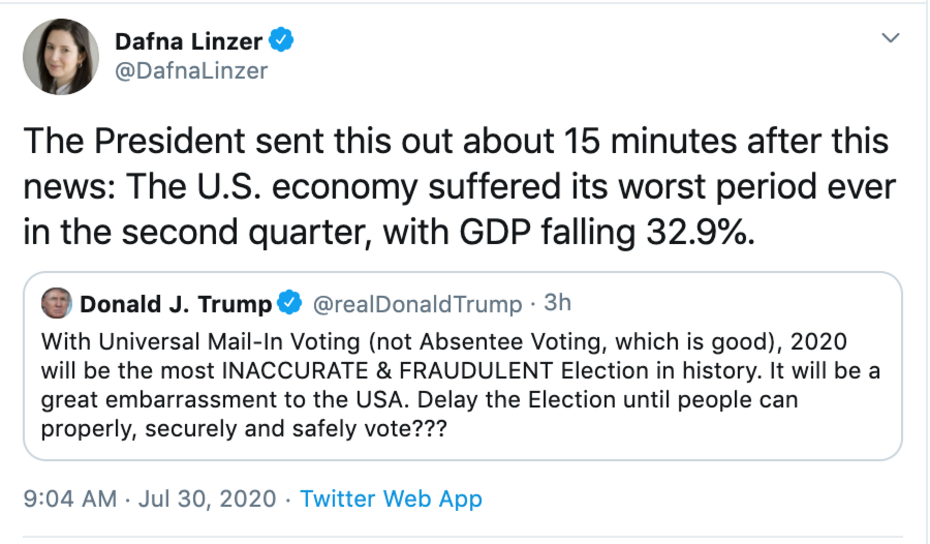