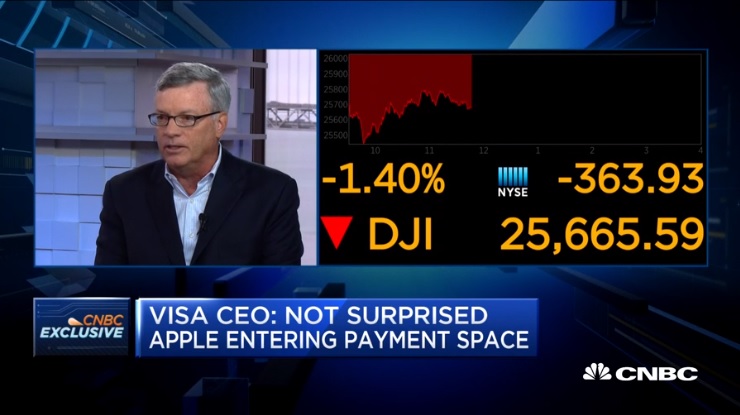 Kelly condemned the shootings and called for legislative action on gun control, but defended his company’s processing of gun sales on CNBC’s Squawk Alley August 7.

CNBC technology reporter Deirdre Bosa asked him if his views had evolved over the past year. She cited other payment platforms like Apple, whose CEO Tim Cook slammed U.S. lawmakers’ “insanity” on the issue.

Visa will continue to “follow the laws of the land,” Kelly said. “We are guided by the federal laws in a country, and our job is to create and to facilitate fair and secure commerce.”

As for gun control, Kelly said lawmakers “need to do their job” to help prevent shootings like the ones in El Paso and Dayton from happening.

Bosa asked, “Even as you see some of the other payment processors make that decision, your stance hasn’t changed at all?” She cited PayPal and Square's policies prohibiting gun purchases.

“If we start to get in the mode of being legislators Dierdre, it’s a very slippery slope. We shouldn’t be determining what’s right or wrong with people’s purchases,” Kelly said.

He called on lawmakers to “get busy on some common sense changes” by looking at “mental health, the size of these magazines, the type of weapons.”

The CNBC.com story reported that Mastercard CEO Ajay Banga had similar views about not blocking gun purchases. Banga told Bloomberg three months earlier it was not “his company’s place to put limits on firearm sales.”