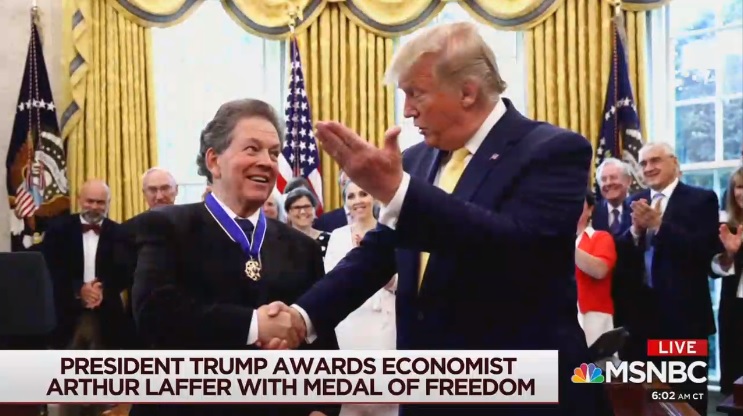 The left’s reaction was predictably vicious. An MSNBC analyst called Laffer one of the most “destructive forces” in economics since Herbert Hoover. New York Magazine writer Jonathan Chait minced no words about his anger over Laffer’s award ceremony, calling him a “kook” elevated to “metaphysical status” within the Republican Party. He ridiculed Laffer’s theory as “provably untrue” and based on a “fake curve.”

Laffer was an economic adviser for President Ronald Reagan in the 1980s and developed his namesake Laffer Curve in 1974 describing the relationship between tax rates and total tax revenue. Laffer has been a proponent of tax cuts to stimulate the economy and advised Trump to pass the Tax Cuts and Jobs Act of 2017. He’s also co-author of the book Trumponomics with fellow free-market economist Stephen Moore.

“Economists do not take Laffer’s claims seriously,” Chait sneered for NY Mag. Conservative economists would disagree with that claim, but the liberal media rarely give them the opportunity.

Trying to argue that 100 percent taxes do not discourage work, Chait absurdly cited the communist Soviet Union as an example of government that “imposed 100 percent tax rates” and collected “a great deal of revenue.” He failed to acknowledge the authoritarianism of the USSR or that it was an economic disaster which eventually collapsed.

Daily Mail contributor William Cole was also displeased and labeled Laffer “controversial” for his association with the “low-tax strain of economic thought” of free-market advocates such as Steve Forbes and Larry Kudlow.

Cole cited Jared Bernstein of the left-wing think tank Center on Budget and Policy Priorities, who attacked Laffer for advocating “tax cuts for the wealthy” and dismissed the thought that his proposals contributed to “significant growth” within the economy. Bernstein had earlier served as chief economist and economic adviser to former Vice President Joe Biden.

MSNBC Morning Joe’s liberal economic analyst Steve Rattner smeared Laffer as “one of the most destructive forces in economic policy” since Herbert Hoover on June 20. He blamed Reagan’s tax cuts for making Americans “inured” to greater budget deficits, without considering how increased federal spending or higher interest rates could’ve been a factor.

“You got to blame Laffer more than anybody else for creating within the Republican Party an excuse to cut taxes and never ever try to replace that revenue,” Scarborough said.

Never mind the fact that after Reagan cut taxes, federal tax revenues actually increased from $517 billion in 1980 to $909 billion in 1988, according to Investopedia.

Commentary Magazine associate editor Noah Rothman offered a more qualified response on Morning Joe. While arguing that the Laffer Curve had “a lot against it over the years,” he cautioned about “ballooning entitlement programs” and disagreed with the idea to “just tax and continue to increase the entitlement state.”

“There is a lot to be said for the fact that growth is a better driver of revenue, tax revenue, than taxation because at a certain point it yields diminishing returns,” Rothman said.