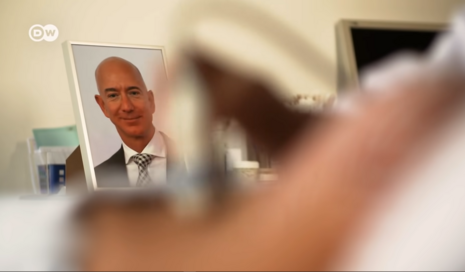 The Amazon employees called on leadership to allow “employees of all genders the space and time to grieve, express their frustrations, and protest against” last week’s Dobbs v. Jackson Women’s Health Organization decision, Business Insider reported.

The employees also reportedly urged the company to “publicly and unequivocally denounce this decision” and even organize “company-sponsored protests in support of Amazon employees.”

LibsOfTikTok shared a purported screenshot of the petition, which read:  “We, the undersigned, come to you today to request immediate and decisive action against the threat to our basic human rights with the overturning of Roe v. Wade.

As part of Amazon’s wide-reaching efforts toward a more inclusive and diverse workforce, we believe that Amazon cannot let this recent decision go unanswered. We ask Amazon, the world’s best employer, to actively defend against this assault on our liberty.”

The other “proposed ideas” for how Amazon should use its “considerable influence” and “responsibility” to help the U.S. “correct its course” were just as extreme. The signees wrote that Amazon should censor pro-life vendors who access its marketplace, according to LibsOfTikTok: “Audit and remove product offerings that misrepresent the facts on abortion or encourage hate speech or violence toward abortion seekers.”

But what about pro-abortion “hate speech or violence”? A wave of radical, pro-abortion terror attacks swept across the country during the past two months. Jane’s Revenge has taken credit for many of the attacks against pro-lifers. (Almost all the major news networks refused to name the group on air, NewsBusters found).

Amazon employees, however, seemed more concerned about asking their company to “expand remote work options” as well as supposed “attacks on our democracy” than about the very real and destructive recent domestic terror attacks on pro-life organizations.

Another proposal pressured Amazon to “Cease operations in states that enact laws that threaten the lives and liberty of abortion seekers, either by denying them healthcare in life threatening circumstances or by criminalizing abortion seekers and providers,” reported the New York Post.

The pro-abortion Guttmacher Institute claimed that 26 states “are certain or likely to ban abortion without federal protections under Roe” in a 2021 report. Texas, Arkansas, Alabama and other states have already moved to ban or severely restrict abortion following the June 24 Dobbs decision.

Amazon employees also reportedly asked their leaders to entitle them “the option to relocate to states that choose to preserve their basic human rights.” Amazon already offers up to $4,000 in travel expenses annually for women seeking abortions.

Amazon did not respond to a request for comment at time of publication.