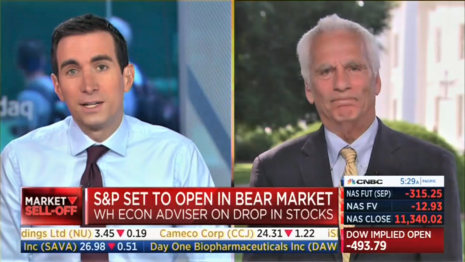 White House Council of Economic Advisers member Jared Bernstein made excuses for the inflation crisis on the June 13 edition of Squawk Box: “First of all, we’re having an inflationary story in every advanced economy in the globe, and in fact, inflation is historically elevated everywhere. So, it’s certainly not just one country’s fiscal or monetary policy.” Ah, so blame everyone else, right? CNBC host Andrew Sorkin, however, pushed him to take responsibility for the crisis: “What did the White House miss?” Bernstein answered that he and his team were “highly competent” at handling soaring inflation. “I don’t think the White House missed much at all” on inflation, he said.

He added that Biden is “as focused, laser-focused, as ever” on inflation but whined about America’s “very strong economic backdrop that sometimes gets lost in the mix in these discussions.”

Inflation spiked to 8.6 percent in June, with egg prices alone surging by 32.2 percent and fuel skyrocketing a massive 106.7 percent year-over-year. On an unadjusted basis, gas prices also hit $5 on average nationwide for the first time ever on June 11.

Bernstein referenced the president and claimed that the economy will “settle from a breakneck pace of growth to one that’s more steady and stable.”

Biden used some of the same wording in his widely panned May 30 commentary on inflation: “With the right policies, the U.S. can transition from recovery to stable, steady growth and bring down inflation without giving up all these historic gains.” [Emphasis added].

Bernstein repeatedly refused to accept blame for record high inflation: “The fact that we have a highly competent group here working to do this is extremely different than just trying to spin things and say who got right what at what time.”

When asked about predictions that the S&P 500 would “open in bear market,” Bernstein responded that “we don’t really, uh, pay too much attention to daily wiggles.”

Unfortunately, those predictions turned out to be more than just “daily wiggles.” The S&P 500 plummeted on June 13 to a new low for this year, “closing in bear market territory,” according to CNBC. And that was not even a full year after Biden congratulated himself on the stock market: “There have been so many records the stock market has hit under my presidency. Imagine if the other guy was here. ‘We’re doing great. It’s wonderful. The stock market is surging. It’s gone up higher under me than anybody.’”

.@POTUS: "There have been so many records the stock market has hit under my presidency. Imagine if the other guy was here. 'We're doing great... The stock market is surging. It's gone up higher under me than anybody.' But that doesn't mean that it's the best for the economy." pic.twitter.com/BSuZo1d2uM