President Joe Biden released his “plan for fighting inflation” in a recent op-ed for The Wall Street Journal. Spoiler alert: The villains behind high inflation are everywhere but the White House, according to Biden.

But some confronted the president for his blatant spin on the economy. 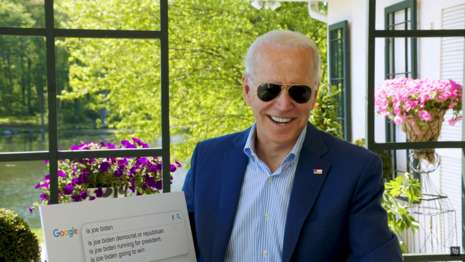 Senator Kevin Cramer (R-ND) threw the book at Biden on Tuesday during Mornings with Maria. Fox Business Network host Maria Bartiromo also called out the president for saying the economy was strong when the government itself recently reported the worst economic contraction since the beginning of the pandemic.

But Biden pointed the finger at Russian President Vladimir Putin, tumbling energy markets, chaotic supply chains and even the Trump administration, in a May 30 op-ed.

But none of those excuses stopped Biden from portraying the economy as robust. “In January 2021, when I took office, the recovery had stalled and Covid was out of control. In less than a year and a half, my administration’s economic and vaccination plans helped achieve the most robust recovery in modern history.”

But Bartiromo wasn’t having any of it. She blasted Biden for claiming that the economy was “robust” in a May 31 interview with Cramer.

“I don’t know how you come up with those words given the fact that we just saw the economy shrink,” Bartiromo said. “We had a contraction in the first quarter. If we have another contraction in the second quarter, we’re officially in recession. And this morning, oil prices are surging again.”

The good news for Biden is that the liberal media has a history of ignoring his economic failures. And that trend continues apace.

The federal government reported on May 26 that U.S. gross domestic product (GDP) dropped 1.5 percent over the past year, which was worse than expected. It was the “worst quarter” since the early pandemic, when lockdown measures took effect across much of the country.

Each of the Big Three morning news shows completely ignored the news on their May 26 broadcasts. Instead, viewers learned about eco-friendly vegan cakes and watched interviews with stars of the medical drama, Grey’s Anatomy.

Like Bartiromo, Cramer also pushed back on Biden’s absurd arguments that he inherited a “very bad economy” from former President Donald Trump.

“The reality is that [Biden] inherited a robust economy built on a strong foundation, built on lower regulations, lower taxes,” Cramer said. “The reason we were able to come back so quickly after COVID was because of the foundation that was built by the Trump administration and Republicans in Congress prior to the pandemic.”