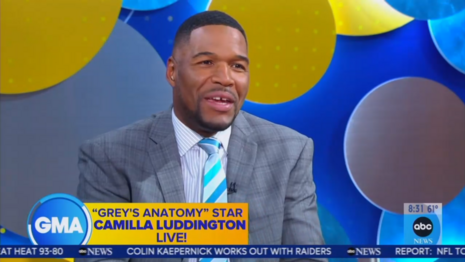 The Bureau of Economic Analysis reported on May 26 that gross domestic product (GDP) contracted by 1.5 percent over the past year, worse than the Dow Jones estimate of a 1.3 percent tightening.

The result even beat the U.S. government’s own estimate of a 1.4 percent drop in GDP released last month. CNBC said the GDP pullback represented  “the worst quarter since the pandemic-scarred Q2 of 2020 in which the U.S. fell into a recession spurred by a government-imposed economic shutdown to battle Covid-19.”

This was critical news for Americans who have already suffered from worsening inflation, an energy crisis and a crippling baby formula shortage. But ABC’s Good Morning America, CBS Mornings, and NBC’s Today and 3rd Hour of Today gave the GDP news zero coverage on their May 26 broadcasts.

Instead, the shows treated viewers to a barrage of fluffy content. GMA spent precious seconds on an interview with British actress Camilla Luddington to celebrate the 400th episode of the medical drama Grey’s Anatomy. CBS had time for an interview with another star of Grey’s Anatomy fame, Jesse Williams. Over at NBC, Today gave a lengthy goodbye to talk show host and fellow liberal Ellen DeGeneres and 3rd Hour of Today taste-tested an eco-friendly vegan cake.

GMA gave the GDP news zilch coverage on its May 26 broadcast. GDP, in fact, was not mentioned once — not even in the network’s moving news chyron. Luddington instead described her “dream scenario” for the ending of Grey’s Anatomy. “Can we be on a beach? I just feel like there have been so many, like, huge disasters. Can we just all survive and like, with a cocktail. That’s what I want, a cocktail on the beach. That’s what I’ll pitch next,” Luddington cheerfully said. “You are a delight,” host Robin Roberts crowed back.

CBS Mornings also neglected reporting on serious economic news to gush over Jesse Williams, another actor on Grey’s Anatomy. CBS Mornings anchors celebrated Williams for his debut role in the Broadway play “Take Me Out,” where the actor plays a baseball player who comes out as gay to his teammates. The CBS Mornings segment was a whopping 456 seconds long.

NBC’s Today and 3rd Hour of Today were no better. NBC’s Today spent roughly 150 seconds bidding farewell to DeGeneres and her talk show, “The Ellen DeGeneres Show.” NBC News correspondent Joe Fryer described the cultural importance of DeGeneres: “Many fans first met Ellen in the 90s on her sitcom where she uttered those two famous words, ‘I’m gay,’” DeGeneres said. The clip was from the 90s sitcom, “Ellen.”

NBC’s 3rd Hour of Today showed off the “Climate Hero Super Cake.” The cake was “made with an animal-free whey protein, meaning it's vegan and bioidentical to dairy.”