UP, UP, UP: Former White House Economist Says ‘No Signs’ Inflation ‘Slowing Down’ 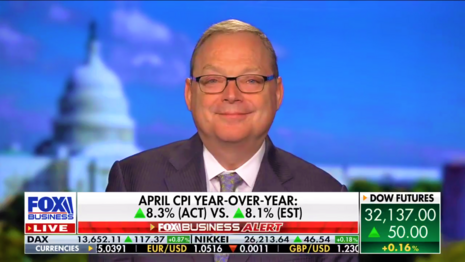 A former White House economist took the Federal Reserve to task for failing to curb inflation while media leftists rushed to excuse Biden for worsening gas and food prices.Kevin Hassett, who served as chairman of the White House Council of Economic Advisers under former President Donald Trump, appeared on the May 11 edition of Fox News host Maria Bartiromo’s show Mornings with Maria to slam the Fed.

Hassett’s comments followed a May 11 government report that revealed that inflation was worse than expected at 8.3 percent year-over-year. “There is no sign that the Fed’s policies are having any effect at all right now,” Hassett told Bartiromo. The former White House economist even went so far as to predict an unprecedented “rout in markets”  as pressure mounts on the Fed to cool down raging inflation.

Hassett also directly criticized the Biden administration for exacerbating inflation and supply chain issues. “[T]hey’re attacking supply when they should be feeding supply,” he said. “If they fed supply, they would help the Fed out and we wouldn't have to go to these really, really major interest rate hikes to fix the problem.” Hassett continued: “If [they] don’t get fiscal policy help, then the Fed is going to have to take pretty extreme actions.” Federal Reserve Chairman Jerome Powell announced a historic hike in interest rates to the highest level in more than 20 years during a May 4 press conference.

Liberal Harvard University economist and former Obama administration economic advisor Jason Furman noted a similar conclusion as Hassett in a Twitter thread following the terrible inflation news. “The 12-month change in inflation peaked,” Furman tweeted. “Core inflation at 7.0% annual rate in April was faster than the 6.5% annual rate in the previous twelve months. Not a lot of comfort in that number.”

Core inflation is a way to calculate inflation without volatile inputs like food and energy inflation, according to Investopedia.