The new inflation numbers are out, and CNN Newsroom anchor Jim Sciutto spun himself in circles trying to present the bad news as a win for President Joe Biden. Whatever happened to “build back better”? 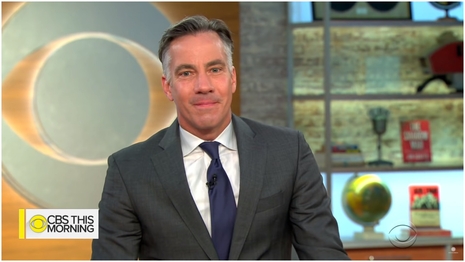 Annual inflation was worse than expected at 8.3 percent year-over-year, according to a March 11 report by the Bureau of Labor Statistics. This was a slight drop from 8.5 percent inflation reported in March. But that didn’t stop Sciutto from fixating on the apparent drop to avoid reality: Inflation was still red-hot in April at over 8 percent. CNN’s resident talking head portrayed the news as positive on Twitter and in the press — “New: US inflation took a breather last month for first time since August,” Sciutto tweeted. “Prices still increased, but at a slower pace than in previous months.” [Emphasis added].

Earth to Sciutto: Gas prices shot up 44 percent, airfare increased 33 percent, and eggs, used cars and hotels all ratcheted up by 23 percent compared to the same time last year. The food index also skyrocketed up by a startling 9.4 percent, the largest 12-month increase since 1981. Does that sound like inflation “took a breather”?

New: US inflation took a breather last month for first time since August. Prices still increased, but at a slower pace than in previous months. CPI was up 8.3% in 12 mos ending in April - a decrease from the 8.5% recorded in March,

Others had a more realistic take on what the inflation numbers might mean for Americans. Even leftist MSNBC host Joe Scarborough cast doubt on the idea that the minor drop in inflation was good news for Americans on Twitter. “When inflation ‘drops’ to 8.3%, working Americans are hurting big time.”

Liberal Harvard economics professor Jason Furman explained that the inflation number that most of the liberal media latched onto was not the most important figure. “Core inflation (excluding food and energy) ran very hot in April, above it’s [sic] pace over the last year,” Furman tweeted. “That’s the big news in the new CPI release--even as the headline CPI fell.”

Furman concluded in another tweet: “Yes, the 12-month change in inflation peaked. But core inflation at 7.0% annual rate in April was faster than the 6.5% annual rate in the previous twelve months. Not a lot of comfort in that number.”[Emphasis added].

Core inflation (excluding food and energy) ran very hot in April, above it's pace over the last year. That's the big news in the new CPI release--even as the headline CPI fell.

Sciutto wasn’t the only journalist who tried to paint over the horrible inflation figures with sunshine and rainbows.

The New York Times claimed that inflation “moderated slightly” on Twitter and said that inflation “cooled” because of a “statistical quirk” in a story headlined: “Consumer prices are still climbing rapidly.” Yes, The Times tried to explain away a slight drop in inflation as the result of a “statistical quirk.” But even The Times conceded: “The pressures that have kept inflation elevated for months remain strong, fresh data released Wednesday showed, a challenge for households that are trying to shoulder rising expenses and for the White House and Federal Reserve as they try to put the economy on a steadier path.”

Economist Peter Schiff tweeted, “April #CPI rose a more than expected .3%, with the core spiking .6%. Stocks and bonds are selling off as investors realize the #Fed must fight harder to defeat #inflation. What they don't realize is that inflation has already won and the Fed will soon stop pretending to fight it.”

Conservatives are under attack. Contact ABC News at (818) 460-7477, CBS News at (212) 975-3247 and NBC News at (212) 664-6192 and demand they report on the terrible inflation report to the American people and stop putting a dishonest spin on the inflation numbers to protect bad Biden administration policies.