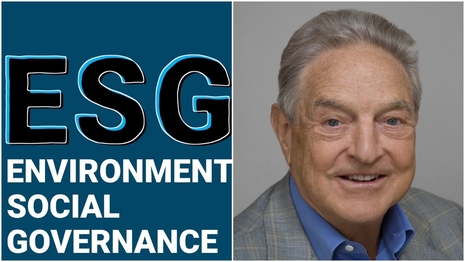 Bloomberg News tried to take the heat off of Soros’s green extremism in an April 26 article headlined, “Soros Fund’s Climate Plan Shows Messiness of Financed Emissions.” But an MRC Business search into Soros Fund Management (SFM) revealed a “Climate Action Strategy” (CAS) and an ambitious plan to eliminate fossil fuel production through use of environmental, social and governance (ESG) standards. SFM’s March 22 CAS report claimed, “We strongly believe that global climate action will make most fossil fuel production unpopular and unprofitable over the long-term, while fundamentally reshaping the business models of companies and projects across a wide range of carbon-intensive sectors.” [Emphasis added].

Utah Treasurer Marlo Oaks (R-U.T.) outlined the dangers of major funds like SFM pushing ESG standards in an exclusive interview with MRC Business, edited for clarity: “These are obviously special interests that are not in the interest of any American. I don't care what political party you are. If you care about the United States, if you care about our form of government, if you care about free markets, [and] maybe you don’t believe in capitalism, but even then” this sort of ESG investing “will lead to the undermining of our national security” and “inflation."

SFM also promised to end “all investments in new fossil fuel companies by no later than 2025,” accelerate the climate transition and reach net zero emissions by 2040. And those words carry some weight, considering that SFM controls a whopping $28 billion in funds mainly on behalf of the radical leftist group Open Society Foundations, according to Bloomberg News.

SFM seems to view itself as a leader in the charge to remake the economy through radical climate policies. “SFM can be a powerful force to help drive the transition to a low-carbon, climate-resilient global economy,” it lauded. Sounds like Soros is fulfilling his leftist goal to “bend the arc of history” in “the right direction” through exploiting ESGs.