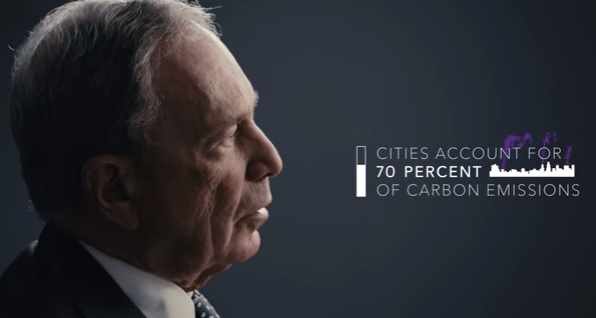 In case there’s any doubt left about the political leanings of billionaire media mogul Michael Bloomberg. The former Republican, turned “Independent” announced he will spend $80 million supporting Democrats in the 2018 midterm elections.

The New York Times reported June 20, that Bloomberg released a statement saying his goal is to oust Republican members of Congress who he thinks “have done little to reach across the aisle to craft bipartisan solutions.”

Ironically, the Times called this “new alliance” with congressional Democrats “a fresh stage in the former mayer’s political evolution,” even after admitting Bloomberg has “championed left-of-center policies on gun control, immigration and the environment” for years.

Bloomberg claimed to only want to support candidates who share his “moderate political orientation” and has called the desire for Trump’s impeachment through the midterm elections “irresponsible.” However, despite often being described as an “independent,” Bloomberg holds left-leaning views on gun control, immigration, and abortion. He supported Hillary Clinton in the 2016 election and spent $80 million on efforts to shut down the coal industry in his efforts against climate change.

His advisers told the Times, although he may donate to select Republicans running for governor positions, they expect he’ll “spend little or nothing on Republicans at the federal level.”

The media mogul must be gunning for highest individual contributor spot Tom Steyer has held on to for two election cycles (2014, 2016), according to Open Secrets. He became the latest big liberal pender to announce midterm plans.

Liberal billionaire George Soros denounced Trump in a recent Washington Post interview and said he would spend at least $15 million helping the left this election cycle. Steyer is also throwing millions into efforts to impeach Trump, by getting Democrats elected in the midterms. He has committed between $50 million and $70 million, Bloomberg News reported.

But money isn’t the only way Bloomberg exerts influence. He also has an entire media conglomerate at his disposal, as president, CEO, and owner of the Bloomberg L.P, which boasts “more than 2,430 news and multimedia professionals at 146 bureaus in 73 countries.”

Bloomberg media constantly parrots Bloomberg’s attitudes on politics (especially gun control and climate change) and Bloomberg L.P.’s board members have donated nearly three times more money to Democrats than to Republicans. It begs the question whether there is any way to maintain news coverage of the midterms in an unbiased way with Bloomberg himself spending millions on those races.

Will Bloomberg media's political stories carry disclosures about the CEO’s spending whenever they report on a race he’s donated to? Journalism ethics guidelines advise journalists to “avoid conflicts of interest, real or perceived. Disclose unavoidable conflicts.”