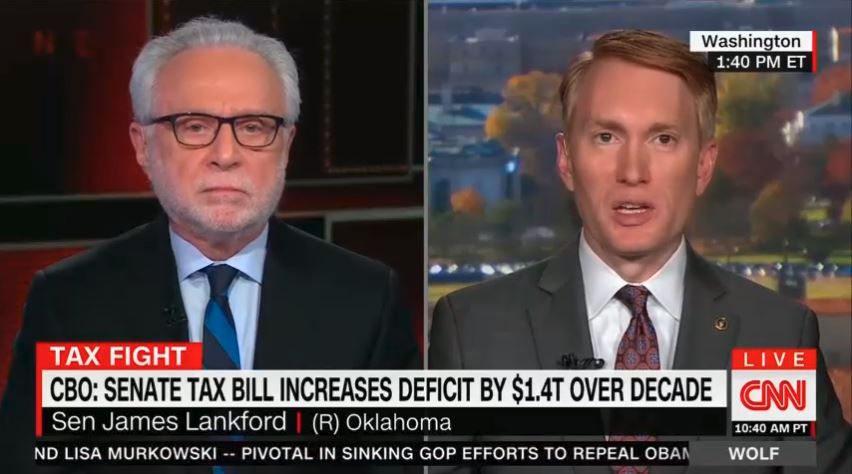 One of the liberal media’s tactics for criticizing tax cuts is to complain about increased deficits.

That was the tack CNN lead political anchor Wolf Blitzer used on Nov. 27, while interviewing Republican Sen. James Lankford of Oklahoma about the GOP tax plan.

Blitzer brought up the Congressional Budget Office’s latest cost estimate for the plan, and praised the CBO’s “pretty good track record” when Lankford disputed the estimate. But in reality, the CBO’s track record is not good, especially on Obamacare.

Lankford is a supporter of the current tax reform plan. During the CNN interview, Blitzer cited CBO claims that the plan would add $1.4 trillion to the deficit over the next 10 years (Blitzer incorrectly used the term “debt” rather than deficit).

He defended the$1.4 trillion figure, implying it would be reliable because both the CBO and the Joint Committee on Taxation (which produced a similar prediction in early November) had a “pretty good track record.”

Later in the interview, Lankford called out the CBO for using “static scoring,” which ignores an economy’s response to tax cuts.

“They [the CBO] assume if you cut taxes, nothing happens in the economy. No one really believes that,” Lankford said. The scoring system is “simple” and “straightforward,” he continued, “but the problem is, that’s not real” because tax cuts have historically lead to economic growth.

Prior to Obamacare’s passage, the CBO estimated 23 million people would sign up through the health care exchanges by 2017. Enrollment was less than half that — just over 9 million enrolled in that time period — AEI visiting fellow Ramesh Ponnuru revealed in March 2017.

A Forbes chart visually depicted just how inaccurate the CBO projection (and revisions) were.

The Washington Post criticized the CBO from the left in 2014 because the agency’s scoring made it “impossible” to pass “anything remotely resembling a long-term investment bill.”