EDITOR'S NOTE: This column was sent to Creators Syndicate hours before the announcement of the Williams suspension.

Brian Williams has ruled the roost at NBC Nightly News for more than ten years. Right before he took over, he saw Dan Rather’s career go up in flames at CBS over phony National Guard documents marshaled against President Bush.

The anchorman's career has imploded for another reason. He seemingly can't stop telling falsehoods about himself.

He was in Iraq reporting during the war and certainly had powerful copy, with visuals, to present -- but it wasn't enough. He had to embellish, from one audience to the next. 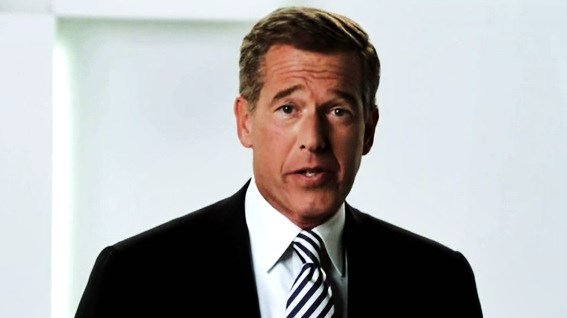 By the time he arrived at the Letterman show in 2013, it was mythology on steroids. His helicopter somehow managed to go further north than the northern-most coalition forces, thus placing him behind enemy lines. His craft took small arms fire. They were hit by an RPG. Their pilot was wounded behind the ear and subsequently was awarded a Purple Heart. They were forced to make a hard landing in the desert, where they sat out a two-day sandstorm.  It was “like ‘Black Hawk Down’ meets ‘Saving Private Ryan,’” he declared on MSNBC in 2003.

The sandstorm was real. Everything else was fabricated.

As in Rather’s demise, New Media thumped Old Media. Soldiers complaining on Facebook led to an article in Stars and Stripes newspaper, where those brave men who escorted Williams said all his stories were junk. It led bloggers on the Internet to do research any network could have undertaken, and NBC certainly should have conducted. Williams was forced to confront the firestorm and did so publicly on his newscast -- only to make matters worse. Among other things, in his apology he declared he'd "misremembered" events. (How Clintonian!) No, it wasn't his chopper that was hit, it was the one they were following.

How in the world does one "misremember" something like that? Truth is, he wasn't telling the truth again. Those who were with him have come forward with devastating information. He wasn't hit. The chopper in front of his wasn't hit.

Chris Simeone wrote a first-person account in the New York Post. That part about the wounded, decorated pilot?  "I was the pilot in command of the aircraft carrying Brian Williams. I do not have a Purple Heart, and my ears are just fine.”

On an NBC prime time special a year after Katrina in 2006, Williams treated New Orleans as the most dangerous town on Earth, complete with weird boasts like “I carried a case of Vienna sausage...as collateral in case we had a smash-and-grab carjacking. I was going to offer it to someone in exchange for my life.” Williams claimed he was so starving for food that “I remember seeing a box of Slim Jims and thinking, ‘That's better than any restaurant meal right now. That's the greatest thing I've ever seen.’”

The section of the French Quarter from which Williams was reporting suffered minimal flooding, and in some parts, no flooding. There were no bodies floating. The city's former health director has declared that no one in the city was treated for dysentery, even a month after the flooding. (Besides, how does one "accidentally" drink flood waters, as he claims?) The manager of the Ritz-Carlton (where he stayed) actually won an award for keeping the place safe from roving gangs with a cadre of police.

Most damning of all: Williams wrote a daily blog on NBC.com during this time. Nowhere did he report floating bodies, dysentery or gangs.

Now it's Israel, with him telling tall tales of Hezbollah rockets coming within 1,500 feet of his helicopter (again) when it was actually six miles the day he reported the incident.

As these episodes keep tumbling out, it begins to sound like the Jon Lovitz character on “Saturday Night Live” who couldn’t stop lying that he was married to Morgan Fairchild., saying “Yeah, that’s the ticket.”

The credibility of this man is shot – and to whatever degree NBC News continues to use him, its credibility is shot as well.