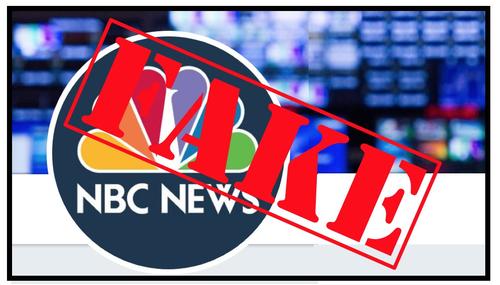 Tom Blumer
December 31st, 2017 4:39 PM
NBC News has given us yet another fake establishment press story to cap off a year of media sloppiness unlike any other. On Friday, the network breathlessly tweeted out a copy of a search warrant "made public today," directed at "an e-mail address associated with Trump surrogate and former Milwaukee County Sheriff David A. Clarke Jr." That the warrant itself was dated March 7 apparently didn't… 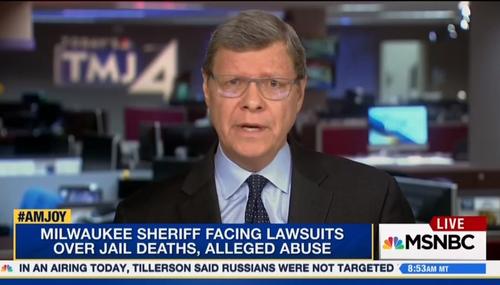 Brad Wilmouth
April 9th, 2017 9:45 PM
On Sunday's AM Joy, it was another case of MSNBC including an alleged conservative guest for the purpose of having him bolster the views of the liberal host rather than provide a contrarian point of view. MSNBC contributor and right-leaning talk radio host Charlie Sykes joined in host Joy Reid's derision of Sheriff David Clarke as he complained that the Milwaukee County sheriff has been "awol"… 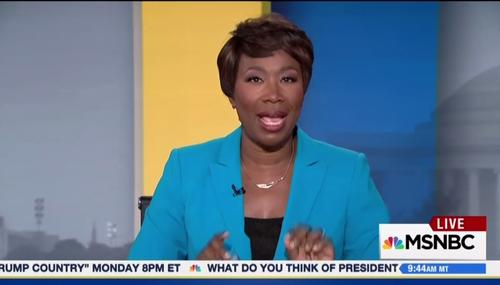 Brad Wilmouth
March 12th, 2017 10:11 PM
On Sunday's AM Joy, MSNBC host Joy Reid spent a couple of minutes fretting over the results of a recent Democratic mayoral primary in black-majority St. Louis in which a white Democrat endorsed by the local police union managed to win the primary because black voters were divided amongst several black candidates.

Cal Thomas
August 19th, 2016 1:57 PM
Growing up, I watched a lot of Westerns. In addition to the cowboy hero, the town sheriff was almost always a model of integrity. He stood for law and order against bank robbers, cattle rustlers and horse thieves all trying to disrupt the peace. A contemporary and real-life version of those fictional characters is Sheriff David Clarke of Milwaukee County, Wisconsin. 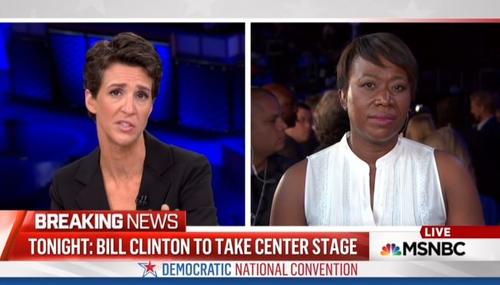 Curtis Houck
July 26th, 2016 10:10 PM
Right on cue, Tuesday night’s MSNBC coverage of the Democratic National Convention (DNC) heaped effusive praise on a team of Black Lives Matter mothers whose sons died in police-involved shootings as a “profound experience” for those in attendance just eight days after they trashed Patricia Smith over a speech about her son’s death in the 2012 Benghazi terror attack. 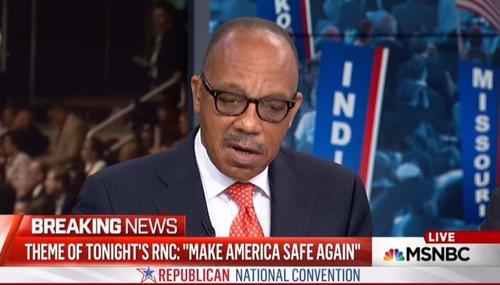 Curtis Houck
July 18th, 2016 10:51 PM
After spending the previous hour on Monday smearing Pat Smith’s speech about her son’s murder in Benghazi as having “ruined” the night, an MSNBC panelist questioned why Republicans turn to “fiery, committed” African-Americans at Republican National Conventions (RNC) “to make [their] case” and another compared the Black Lives Matter movement to the Boston Tea Party. 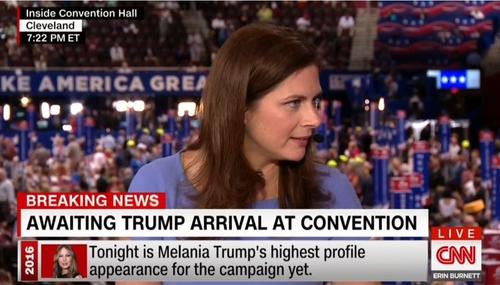 Nicholas Fondacaro
July 18th, 2016 10:07 PM
Less than 24 hours after the highly contentious interview between CNN’s Don Lemon and Milwaukee County Sheriff David Clark, CNN Host Erin Burnett demanded to know if Donald Trump agreed with him. “He’s [Sheriff David Clarke] going to be speaking tonight. He blames black lives matter for these tragedies against police. Does Donald Trump condone that,” Burnett asked to a Trump supporter on her… 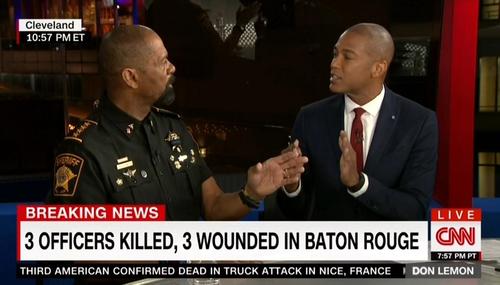 Matthew Balan
July 18th, 2016 5:30 PM
Don Lemon attacked Milwaukee Sheriff David Clarke in a Facebook post on Monday over their sparring over Black Lives Matter and related issues on Sunday's CNN Tonight. Lemon lamented how Clarke supposedly was "displaying...exactly what so many fear about law enforcement." He added that Clarke's conduct was "probably not the best representation right now of...[those] who so bravely wear a police… 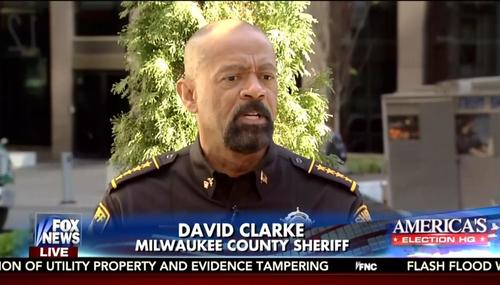 Brad Wilmouth
April 21st, 2016 12:23 AM
Appearing as a guest on Wednesday's Fox and Friends, Milwaukee County Sheriff David Clarke slammed "liberal Democrat mayors" for mishandling crime and the economy in their cities, and accused Democratic presidential candidate Hillary Clinton of "pandering" to black voters in a recent appearance on a radio show, as he asserted that her behavior is "dehumanizing, it's embarrassing, it's disgusting… 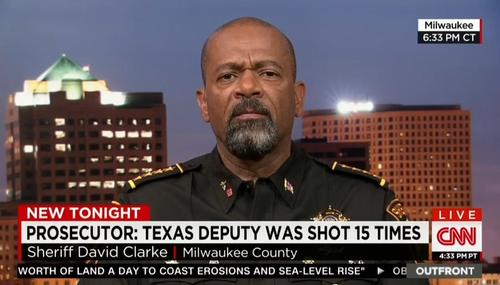 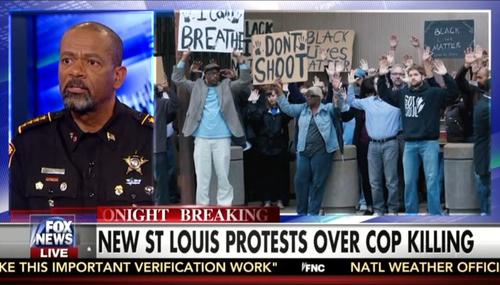 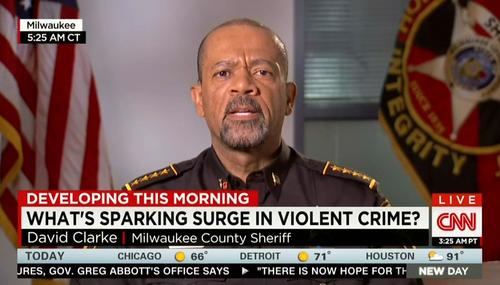 Brad Wilmouth
June 2nd, 2015 5:11 PM
On Tuesday's New Day, CNN gave attention to recent surges in violent crime in American cities, including Milwaukee, as it brought aboard Milwaukee County Sheriff David Clarke as a guest to give his take on why the spike has occurred.   Sheriff Clarke, an elected Democrat, began by making a conservative argument against "failed social engineering projects," as he advocated longer prison… 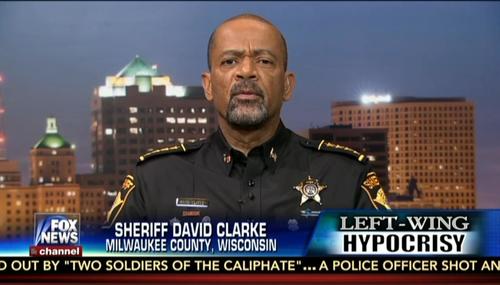 Jeffrey Meyer
May 6th, 2015 11:47 AM
On Tuesday night’s Hannity, Milwaukee County Sheriff David Clarke slammed the ”liberal mainstream media” for ”propagating this false narrative about how law enforcement treats black males and people in the black community” in places like Baltimore and Ferguson. He accused the media of ginning up “race politics. They support a lot of the leftist agenda when it comes to this stuff, identity…