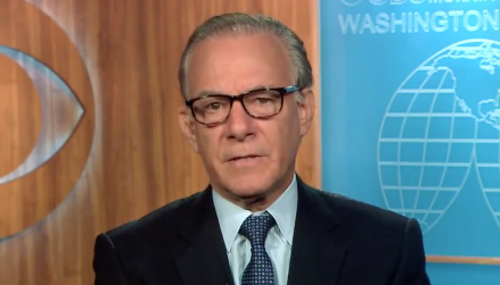 Tom Blumer
November 9th, 2014 10:12 PM
On Thursday, the first paragraph of a column by the Washington Post's David Ignatius on what he thinks President Barack Obama's foreign policy might be for the next two years contained what may qualify as the "Notable Quotable" of the year. The first sentence was a pretty impressive failure at perception: "President Obama looked almost relieved after Tuesday’s… 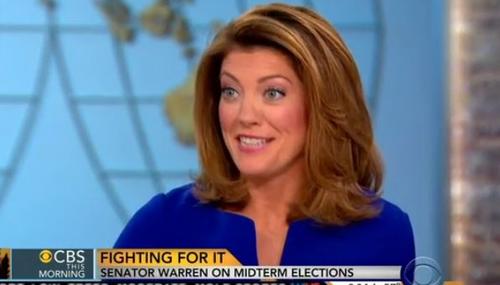 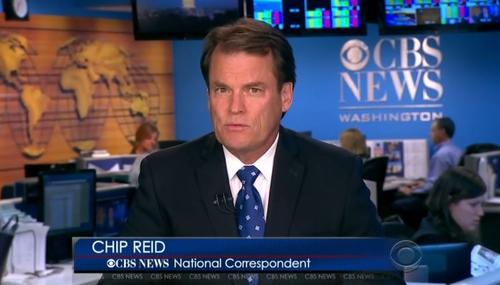 Curtis Houck
October 27th, 2014 10:07 PM
On Monday night, CBS News national correspondent Chip Reid continued to promote an ad by a liberal organization that claims Republicans in Congress are responsible for cutting funding for research hoping to find an Ebola vaccine. Reid stated at the conclusion of his report on the CBS Evening News with Scott Pelley how: “One independent liberal group released… 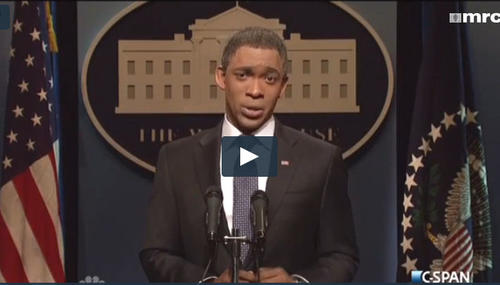 Brent Baker
October 26th, 2014 3:20 AM
Out of sync with MSNBC, NBC’s Saturday Night Live opened last night with a skit in which “President Obama” acknowledged the ineptitude of his administration and “Ron Klain,” the Ebola Czar, conceded to a reporter that he has no medical expertise. Picking up on poor Democratic prospects in the mid-term elections, the comedy show then had Klain warning “if you… 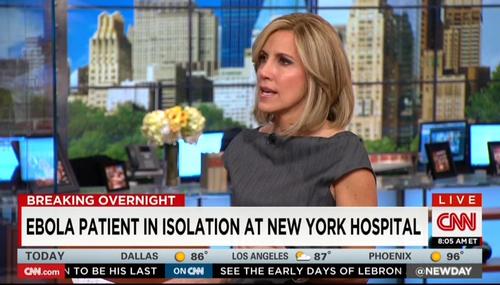 Matthew Balan
October 24th, 2014 5:25 PM
CNN's Alisyn Camerota promoted a liberal talking point about the Obama administration's response to the Ebola outbreak on Friday's New Day, as she interviewed Rep. Jason Chaffetz. Camerota spotlighted "many Democrats...say that Republicans in the Senate have blocked the President's nominee for a surgeon general that we could have had one year ago – but Republicans have… 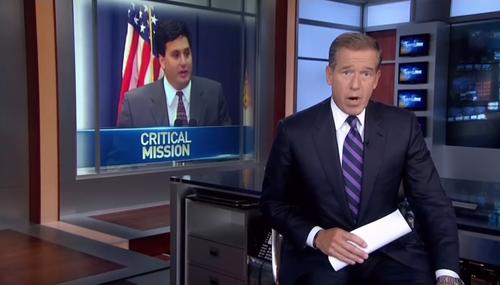 Joseph Rossell
October 24th, 2014 10:33 AM
The Obama administration has taken heat during the Ebola crisis as many Americans worry not enough has been done. In response, the administration appointed a lawyer to be the country’s Ebola czar. But many on the left and in the liberal news media are blaming Senate conservatives and the National Rifle Association (NRA) for halting the confirmation of President Barack Obama’s anti-… 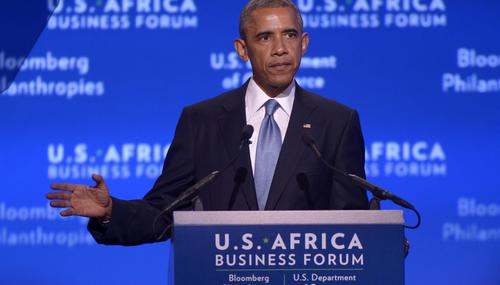 Clay Waters
October 20th, 2014 11:33 AM
The New York Times is one of the media's prime carriers of sickly White House assurances about Ebola, dictating unfounded claims that it has the disease under control, while dismissing calls from Republicans and health experts for banning flights out of infected countries as paranoid, unscientific overreaction. 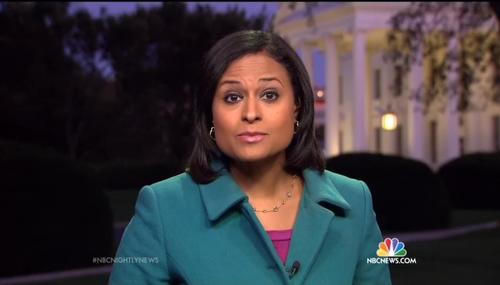 Jeffrey Meyer
October 20th, 2014 9:53 AM
On Sunday’s Nightly News, Kristen Welker, NBC News White House Correspondent, scolded the GOP over their criticism of the Obama administration’s handling of the Ebola crisis. The NBC reporter maintained that “with public fears spreading faster than the disease itself, some Republican candidates eyeing wins in the upcoming midterm elections are … 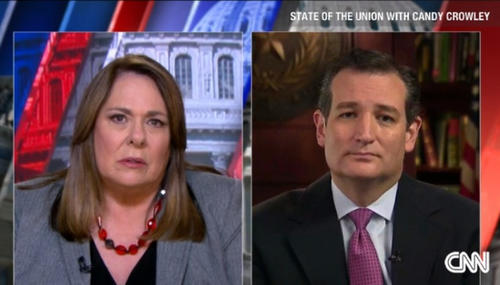 P.J. Gladnick
October 19th, 2014 7:10 PM
Candy Crowley on what Rush Limbaugh would label the state run CNN show of State of the Union seemed to place her blind trust in the assurances of state affiliated medical personnel that a travel ban on the Ebola Hot Zone nations of West Africa was both unnecessary as well as harmful. It took guest  Senator Ted Cruz to make it clear to Crowley just why such a ban was absolutely necessary.… 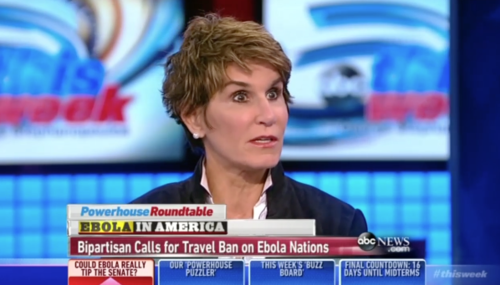 Jeffrey Meyer
October 19th, 2014 12:13 PM
On Sunday, October 19, a panel on ABC’s This Week engaged in a highly contentious debate over the Obama administration’s handing of the Ebola crisis. Conservative Mary Matalin mocked PBS host Tavis Smiley for criticizing those who are calling for a travel ban on Ebola stricken nations. The former George W. Bush official argued that “the African leaders who have contained to… 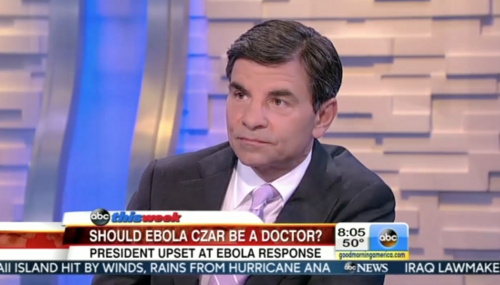 Jeffrey Meyer
October 19th, 2014 9:57 AM
During an appearance on Sunday’s Good Morning America, ABC’s George Stephanopoulos did his best to deflect criticism away from President Obama’s decision to name Ron Klain, former Chief of Staff to Vice Presidents Joe Biden and Al Gore, as his Ebola czar. Speaking to weekend GMA host Dan Harris, Stephanopoulos insisted that “Ron Klain is an expert in … 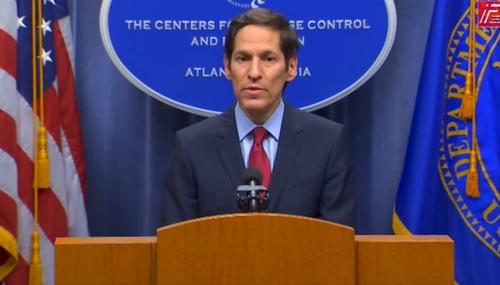 Jeffrey Lord
October 18th, 2014 8:05 AM
The Taranto Principle strikes again. Dr. Tom Frieden, the Director of the Center for Disease Control, has just slammed headlong into the Taranto Principle. No wonder this smart, talented doctor is wandering around staggered at repeated calls to resign, calls coming from everyone from Fox’s Bill O’Reilly to members of Congress and a growing crowd beyond. 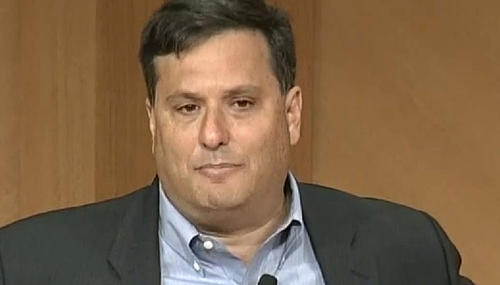 P.J. Gladnick
October 17th, 2014 4:51 PM
There was some soul searching on the part of The New Republic editor Jonathan Cohn over whether a political hack like Ron Klain with no medical experience should be appointed as Ebola Czar. However, that period of doubt was quite brief once Cohn was reassured by fellow liberals that being a political hack in that position was perfectly okay even if one was engaged in financial scandal as Klain… 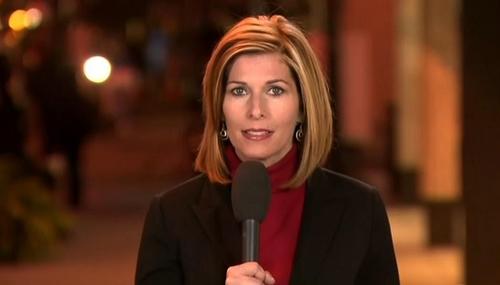 Tim Graham
September 12th, 2014 3:43 PM
Former CBS News investigative reporter Sharyl Attkisson took the opportunity of the second anniversary of the Benghazi fiasco to tweet away about the amazing fact that we still do not know what President Obama was doing in real time as four American public servants were killed in Benghazi.