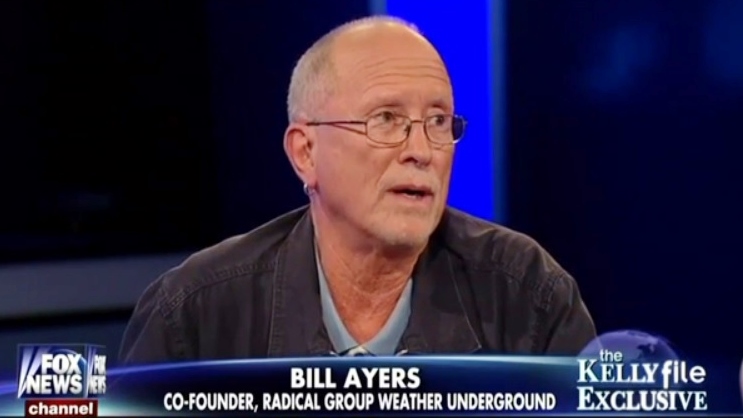 On Thursday morning, Salon posted an interview with Bill Ayers in which he and questioner David Masciotra discussed topics including Ayers’s appearance this summer on Megyn Kelly’s show; the state of American public education; and why Ayers thinks the Tea Party doesn’t understand the concept of freedom.

Some of Ayers’s more noteworthy remarks from the interview follow (emphasis added):

-- “I had never even seen Megyn Kelly. She struck me as a very strange person. She’s like a cyborg constructed in [the] basement of Fox News. She’s very striking, but very metallic, very cold. Her eyes are very cold.”

-- “If you look at the two great dystopic novels of the twentieth century, '1984' and 'Brave New World,' they were both right. So, we have [B]ig [B]rother and the surveillance state, but we also have sex, and entertainment.”

-- “What does freedom mean in America? Everyone is free, but they are suffocating in the folds of the American flag if freedom is divorced from social purpose and common good, and freedom is entirely a private, individual goal. So, you’re free, but you’re free to destroy the planet.”

-- “In 1840 if you were opposed to slavery, you were opposed to the Bible, the founders, the law, your parents, and your neighbors…The moral baseline of America embraced systematic torture and rape. Then, abolition created a different moral floor – raised it up a little bit. It didn’t mean that people were no longer wicked or murderous or stupid, but it did mean that the moral floor had shifted. That could happen again.”